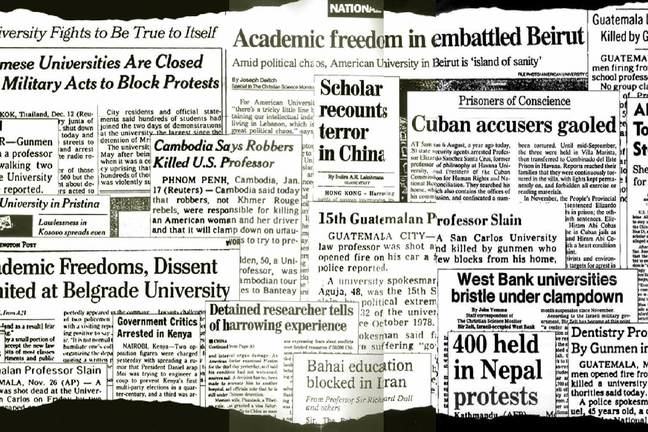 Headlines from around the world reporting on attacks on academic freedom

What does academic freedom actually mean? A brief history.

Academic freedom can be difficult to define precisely. It is generally recognized as the freedom of academics:

This definition was agreed unanimously by UNESCO - the United Nations Educational, Scientific and Cultural Organization - in 1997.1

In this course, we will look closer at what this definition means, and why it matters– or should matter– to you today.

But first, we need to understand where the concept of academic freedom comes from. How old is it? Is it just a European idea? Or is it something older? Something bigger?

Academic freedom has evolved along with the modern university. All regions of the world have made important contributions to the evolution of the university. And all regions have contributed to the concept of academic freedom. Some features go back as early as the third century C.E., while others developed rather more recently.

This article provides only a very brief summary of the development of the university, and with it the evolution of academic freedom and related values. A list of further reading is provided at the end of the article.

Asia has had many ancient institutions of higher Learning from an early time. Nanjing University in China was an imperial school as far back as 258 CE. China also had many private academies. Similar to the medieval universities of Europe, these functioned first as libraries and later as research institutes and training academies.2

Other countries with ancient learning traditions include India and Vietnam. In India, Nalanda was an established centre of learning from the 5th to the 12th century. At its peak, two thousand teachers and ten thousand students from all over the Buddhist world lived and studied at Nalanda.3 Vietnam also boasts examples of ancient centers of learning. Van Mieu in Hanoi was founded in 1070 as a Confucian temple, followed shortly after in 1076 by Vietnam’s first university, the Quoc Tu Giam or National University.4

Africa has had institutions of higher learning for centuries. The earliest known universities appear in the northern part of the continent, most notably in Egypt and Morocco. The University of Al-Karaouine has been operating continuously since it was established in Fez (Morocco) in 859.5 It played a leading role in relations between the Islamic world and Europe in the Middle Ages.6 Al-Azhar University in Egypt, connected to Al-Azhar mosque, was founded in 969/970. It quickly became an important seat of Arabic-Islamic learning.7

In these places the pursuit of knowledge for its own sake was a recognized good. This changed in the colonial and post-colonial periods when “utilitarianism” and “development,” respectively, became the primary purposes. This had negative consequences for the state and the evolution of universities.8

Early institutions in the Middle East took a variety of shapes and sizes, ranging from madrasas, khans, mosques and academies. In Iran the Academy of Gundishapur was established in the 6th and 7th centuries as an important medical center. It provided training in medicine, philosophy, theology and science.9 Elsewhere, so-called ‘nizamiyyah institutes’ were among the earliest organized centers of higher learning. Madrasa Nizamiyyah was founded in Baghdad, Iraq, in 1067 and primarily taught law.10 In the 13th century Al-Mustansiriyah was established in Iraq. First it focused on theology, later adding medicine, mathematics and other subjects.11

The European university model borrowed from these traditions. It emerged in the 11th century with the University of Bologna (1088). It was organized around autonomous guilds of students and masters. The University of Paris, established in 1150, also had largely self-governing faculties or departments. Much like modern universities, they were often in tension with a chancellor or central authority.12 These early ideas of an autonomy and self-governance are very much alive today.

In the Renaissance period we meet new methods and avenues of inquiry. Scientific inquiry in the modern sense came to be. Obstacles to inquiry remained. It is well known that Martin Luther, a minister and professor in Wittenberg, Germany, clashed with church authority in the early 16th century. In the early 17th century Galileo’s scientific ‘truth’ that earth revolved around the sun brought him before the Inquisition.13

By the 18th century the Enlightenment was fully established. Intellectual activity along a rationalist, scientific line was encouraged. Democracy and freedom were much emphasized. There was less control of Church and State on inquiry.

The early Industrial Revolution further modernized higher education. Universities were challenged to keep up with new technological and scientific developments and society’s needs to understand and use them.14

The so-called Humboldt type of research university in early 19th century Germany were most successful at meeting these challenges. They altered the way academia operated. Their ideas of “lehrfreiheit” (freedom to teach) and “lernfreiheit” (freedom to learn), removed restrictions on academics in the classroom and laboratory.15

It’s fair to say that their freedoms were not complete. They did not reach to expression outside of the classroom and laboratory. These freedoms also did not guarantee protection. Throughout the 20th century we see persecution of academics across Europe: The Bolshevik Revolution in Russia and the Nazi Third Reich in Germany and other fascist dictatorships in Italy, Spain, Greece and beyond led to purges.

In the late 19th century North American institutions were greatly influenced by the development of the European research university. The numbers of higher education institutions increased. So did the understandings of academic freedom.

Early in the 20th century the (US) American Association of University Professors (AAUP) formalized understandings of academic freedom and institutional governance. Tenure (fixed-term positions) was established as a protection for academic freedom. They also extended the scope of this freedom beyond the classroom and laboratory. It came to include some protection of expression outside of the university, even on subjects outside of the professor’s academic expertise. This recognized academics as valuable social contributors. They now got special protections to encourage the spreading of their views.16 Still, the principles of academic freedom and institutional governance were often violated. In the United States during the McCarthy era some academics were investigated and lost their jobs for political reasons.

Latin American universities were also influenced by European models, in particular the Spanish and French. The first higher education institutions appeared in Santo Domingo in 1538 and in Mexico and Peru in 1551.17 The model imported from Spain, based upon the University of Salamanca, saw students participate in university governance.

The Cordoba Reform of 1918 presented new thinking about how universities should be run. The academic community elected its own leaders and governed itself, without government interference.18 The ambitious vision of the Cordoba movement lay the foundation for Latin America’s autonomous universities. Its wider vision of university autonomy has spread widely.

These ideas have continued to evolve. In 1997, the General Conference of UNESCO adopted its Recommendation Concerning the Status of Higher Education Teaching Personnel.1 The Recommendation provides the most definitive, international definitions of academic freedom. Related higher education values are also included: Equal access to education, the institutions being accountable to society and autonomous, having social responsibility.

The recommendation also grounds academic freedom in democratic values. The scholars need to engage with society outside of the classroom, laboratory or campus. And it recognizes that states and society have a responsibility to protect higher education communities and to promote academic freedom.

Are some questions too dangerous to ask? This is the main question that we will discuss in this course.

8Y. G-M. Lulat, A History of African Higher Education from Antiquity to the Present: A Critical Synthesis (Praeger, 2005), p. 3.

This article touches on briefly on the history and origins of academic freedom. Readers are encouraged to explore this rich history in more detail, especially as it relates to their own local history and traditions. There are many resources available including those listed below.

Learn how the principles of psychological well-being, communication and interpretation can benefit your work with refugees