This content is taken from the University of York's online course, An Introduction to Sociolinguistics: Accents, Attitudes and Identity. Join the course to learn more.
View course
2.8 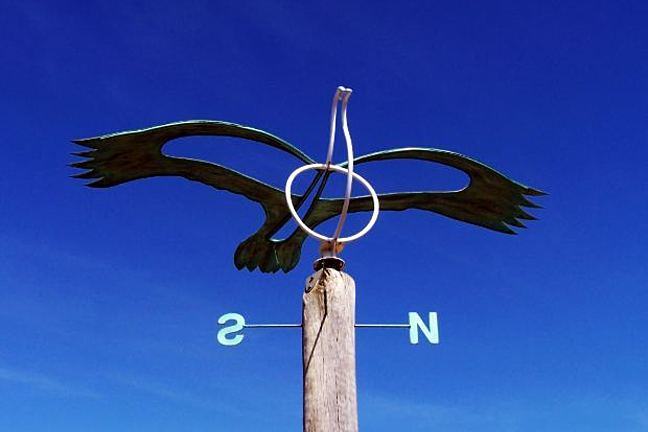 ‘The Use and Utility of Localised Speech Forms in Determining Identity (TUULS): Forensic and Sociophonetic Perspectives’ project is being carried out by University of York staff and investigates similarities and differences in accents across North East England.

The focus here is on speech used in three different urban centres: Newcastle, Sunderland, and Middlesbrough. One of the aims of the project is to identify the specific pronunciations that distinguish these accents from each other. The Geographical Association Test (GAT) is one of the perception tasks used as part of the sociophonetic strand of TUULS. Sociophonetics uses phonetic data and methods to answer sociolinguistic questions. The GAT focuses on some of the differences in pronunciations and investigates listener sensitivity to localised accent features in the North East of England.

This strand of the research project is interested in how listeners perceive pronunciation variants and people’s knowledge of what makes the accents distinct from one another. As part of a series of tests in the TUULS project, the GAT required participants to indicate on a map of North East England which place they most closely associated with a certain pronunciation of a word.

Participants were all living in one of the three fieldwork sites in the North East: Newcastle, Sunderland, or Middlesbrough. They listened to short recordings containing the target features of special interest. These speech features were specifically chosen as the researchers predict these are especially important features that differentiate the varieties in the North East. Examples include recordings of ‘DIVVENT’, ‘FILM’ and ‘NURSE’. The pronunciation variation of NURSE is of special interest to sociolinguists, as English speakers exhibit a great variety of different pronunciation patterns. Additionally, the vowel in NURSE is also used when saying words such as ‘bird’, ‘person’, or ‘work’, depending on a speaker’s accent. The word ‘DIVVENT’ is what is called a lexical feature rather than a pronunciation feature and is only used in certain areas of the country. Participants heard each recording of a single word which contained one of the variables of interest three times. They were then shown the map of North East England, with the larger towns and cities marked on it. At this point, they were asked to click somewhere on the map to say where they thought the speaker in the recording was most likely to be from based on the sound clip of the word they heard. 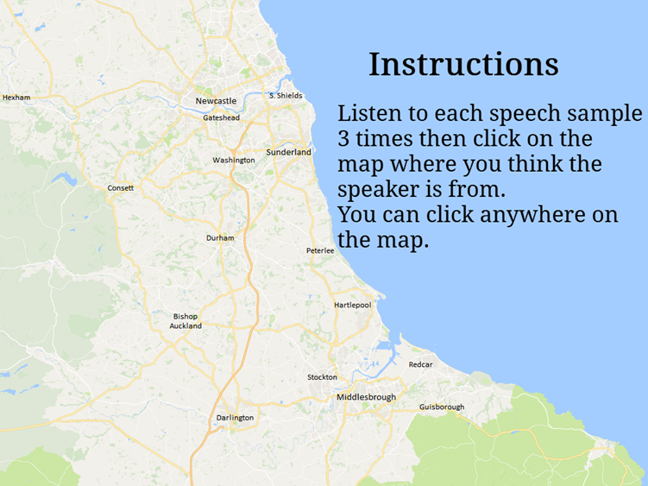 Participants mostly chose places that were labelled, and seemed to prefer to choose the bigger towns or cities. However, some of the areas marked by the participants were towards the edges of the map, and it wasn’t clear why. Perhaps they wanted to suggest that the form was used outside the North East rather than within it. While the reason behind these latter choices, which were few in number, is more or less unclear, the association of the different recordings with bigger labelled cities on the map does yield interesting results.

Let’s look at an example and focus on the results for the pronunciation of words with the ‘NURSE’ vowel. This vowel can be pronounced in different ways according to where the speaker is from. Although earlier research on North East varieties has found structured variation within localities in the use of variants of this vowel, the aim of the GAT was to determine what place associations local people made with the particular pronunciations. The three different localised forms here were [ɜː], [ɔː], and [ɛ̈ː], which you can listen to. The figure below shows the results of the GAT for the variable ‘NURSE’.

In the figure, north and south refer to the top and bottom of the map that participants were working with. Therefore, the figure reflects where on the map of the North East participants placed the sound files they listened to. The figure shows that listeners do indeed seem to associate specific pronunciations with geographical location within the region, in more or less the way that researchers had expected. Participants from Newcastle and Sunderland rated [ɜː] (in red) as a form more typical of their own, northern part of the region, while the participants from Middlesbrough did not show such an agreement and attributed this form of pronunciation to a larger area on the map. Regarding the pronunciation of ‘NURSE’ as with the [ɔː] vowel (in green), there was very strong consensus among the Newcastle participants that this form is one local to their area, while listeners from Sunderland chose a wider variety of locations on the map. Listeners from Middlesbrough seemed to agree overall with the perception that this form is mostly heard in the area of Newcastle. The same phenomenon of a strong consensus regarding the association of a form with the listener’s own place of origin can be observed in the results for the vowel [ɛ̈ː] (in yellow). Here, participants from Middlesbrough were in close agreement that this form is used in Middlesbrough, while both the listeners from Newcastle and those from Sunderland did not show any consensus. They chose a wider range of areas where this variant is used, which included their own places of origin. The vowel in question is indeed also used in Newcastle, but not in Sunderland. It is also noteworthy that the median line for the answers given here falls further north for the listeners from Newcastle. This means that even though participants from Newcastle and Sunderland pointed to locations on the map which cover an area from the south to the north, that overall the participants from Newcastle still leaned more towards the north here than those from Sunderland.

The researchers ran correlation tests and found that yes, there seems to be a connection, but only for the participants from Newcastle in this particular case of variants of the ‘NURSE’ vowel. The color-coded table below shows the results in detail. Fields in green show that here, the distance between the speaker’s origin (the one in the recording) and the point the listener marked on the map was small. Red fields indicate that the listeners here do not associate this specific pronunciation of ‘NURSE’ with the locality of the speaker. This can be seen among the participants from Middlesbrough in the table in the middle.

The results presented in the table support the results shown in the previous figure. There, we saw a strong consensus among the Newcastle participants that the [ɔː] vowel is one local to their area, while the vowels [ɛ̈ː] and [ɜː] were associated with a bigger geographical area. Remembering this, you can see how the researchers came to the conclusion that there seems to be a connection between the listeners’ productions and perceptions for the Newcastle participants group.

To sum up, we can say that the GAT is a useful addition to a researcher’s toolkit should they want to investigate sociolinguistic patterns or dialects. The GAT especially grants the opportunity to gain insight into the perception and identification of different pronunciations and how these are associated consciously with localities or areas. The variation in such a small geographical area as that investigated by the TUULS project demonstrates how fine-grained such knowledge can be.

The project is funded by the Economic and Social Research Council (ESRC). The ESRC Grant Number is ES/M010783/1.