We will discuss the idea that training a statistical model is equivalent to finding values for its parameters that optimize a loss function. In doing this, we will be able to discover the value for the loss function on the training data.

Before considering what this desire to minimize expected loss on new data means for us when training a model, let us first analyze the expect loss, here after the expected error, of a model on data.

To do this, we introduce three concepts:

Interested students can see a formal derivation of the bias-variance decomposition in the Deriving the Bias Variance Decomposition document available in the related links at the end of the article.

Since there is nothing we can do about irreducible error, our aim in statistical learning must be to find models than minimize variance and bias. Now consider the ‘sophistication’ or ‘complexity’ of a function, considered informally as simply it’s curviness. Consider, for example, the curves on the following image: 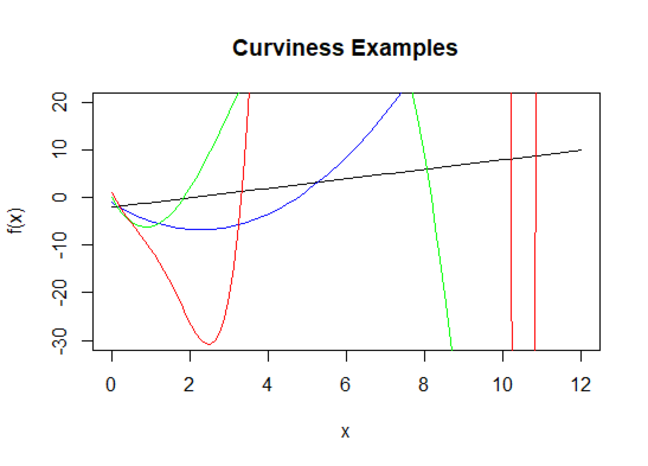 The curves in this example are:

Clearly in terms of curviness Black < Blue < Green < Red, and so we specify that whatever complexity is, the same is true of it.

Simple models will struggle to model complex functions. Consider a very curvy function being modeled by a linear function. No matter how hard we seek to model this curvy function, our linear model will never get it exactly right. It is, we would say, biased. An example is given below: 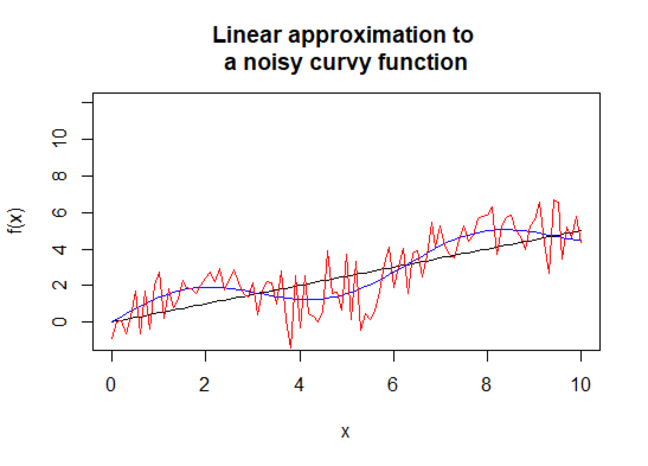 Here the red curve is the true function (which includes noise). The blue curve is the deterministic component of the function, and the black curve is our linear approximation. This is a good example not only of the inability of the linear model to accurately model a curvy function, but also of irreducible error: No model can do better than the blue curve since the difference between the red and blue curves is due entirely to random noise.

As the models we use are allowed to get more complex (more curvy in our discussion) they will be able to model more and more real world systems with reasonable degrees of accuracy.

Intuitively, however, as a function gets more complex (curvy) it will ‘move around’ more too. And so we might expect that its variance will increase. This is, in fact, exactly what does occur. Accordingly, we can envision the components of expected error as a function of complexity, when irreducible error stays constant, bias reduces and variance increases. 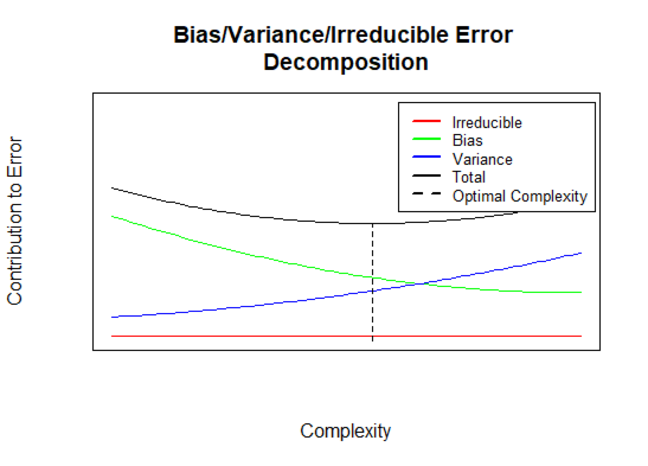 A common, though imperfect, measure of the complexity of a statistical model is the number of parameters it has. We will adopt such a definition here (though we will have reason to adjust it later).

When we utilize a model that is too complex for the function being modelled (given the amount of learning data we have available) we see that the variance component of the expected error increases. In popular parlance this is known as overfitting. 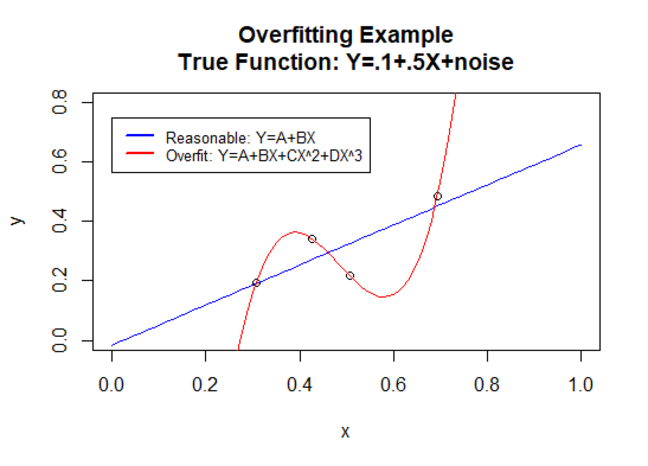 The blue line is a linear regression (OLS) model. The red is a polynomial regression model of third order. The form of these models (written more clearly than in the legend) is:

To emphasise the fact that complexity causing overfitting is related to the amount of training data, examine the effect of training the two models on 100 points instead of 4: 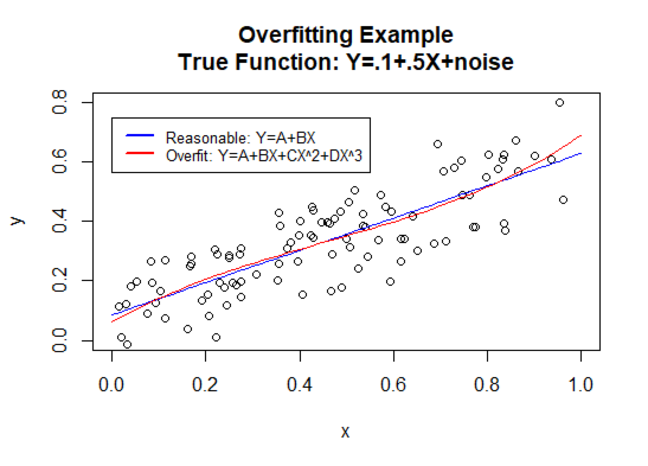 Overfitting is one of the most constant dangers of advanced statistical machine larning. The models we work with tend to be very complex, and so able to overfit even when trained of reasonably large sets of training data.

How do we choose models that have low expected error? We will have discuss this in detail in week 2. But already it should be obvious that one thing we can do is see how models perform and data that they have not been trained on. This is the basis of validation techniques for model evaluation and selection.