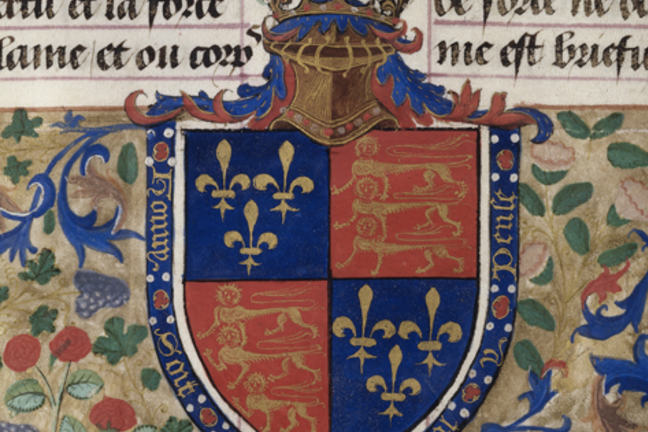 The Arms of England and France

Henry's return to England and entry to London

In this article, Dan describes Henry V’s triumphal return to England and its impact on subsequent discussion of the Battle of Agincourt.

The Chronicle of London states that Henry arrived back in England on 16 November at Dover and then made his way towards London. He was no longer accompanied by the army, which had been stood down at Calais and transported in stages to different ports, such as Sandwich, Dover, Portsmouth and Southampton.

As he re-entered England the king was accompanied by a relatively small entourage and his most important prisoners, such as Charles, duke of Orléans and Louis, Count of Vendóme. The Brut chronicle then states that Henry went to Barham Down, where he was greeted by members of the Cinque Ports. Henry’s entourage then moved onto Canterbury where he made an offering at the shrine of Thomas Becket, before proceeding onto to Eltham Palace on the outskirts of London prior to his entry into the city. This was an orchestrated affair which the City of London had been preparing in anticipation of the king’s return. It paralleled the entry of the Black Prince into London on 24 May 1357, with the French king John II and other leading prisoners from the battle of Poitiers. The point of such entries was to emphasise the importance and status of London as well as that of the monarchy.

On 23 November 1415, Henry entered the city of London in triumph with the Corporation of London putting on extravagant displays of pageantry to celebrate the king’s victory. Such events were few and far between and it is not surprising that the entry made a deep impression on contemporaries, with the chronicler Walsingham stating that the reception of the king was so brilliant and varied that it would require a special treatise to record it adequately. 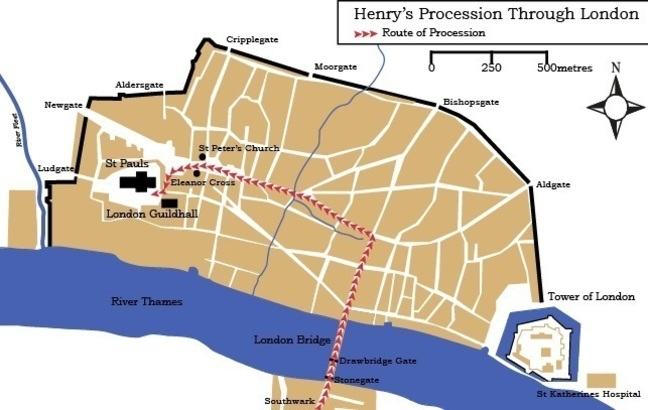 According to the Gesta Henrici Quinti, the king was greeted outside the city at Blackheath by 20,000 citizens on horseback wearing red clothes together with red and white hoods. At 10 o’clock the king came into their midst wearing a gown of purple, with the Londoners congratulating him on the victory he had achieved and praising God. The citizens then headed to London with the king, his small retinue and his most important French prisoners.

Evidently the corporation and citizens of London had been busy since receiving news of the victory as they had constructed special displays symbolising the importance of London as well as Henry’s kingship.

At the south entrance to London Bridge he was confronted by two enormous figures bearing the royal arms.

‘And, all around them, projecting from the ramparts, staffs bearing the royal arms and trumpets, clarions, and horns ringing out in multiple harmony embellished the tower, and the face of it bore this choice and appropriate legend inscribed on the wall: Civitas Regis Iusticie (City of the King of Justice)’. (Gesta Henrici Quinti translation in Taylor and Roskell, [eds] 1975, p.103).

As the king made his way further along the bridge as far as the ‘little drawbridge’, he would have seen two pillars with the appearance of towers on either side of the bridge, each built of wood and covered with linen cloth painted to resemble stonework. The pillar on the right had the figure of an antelope with a shield of the royal arms and a royal sceptre. On the other pillar was a lion holding a staff with the royal standard unfurled.

Directly in front of the king was another pillar which contained a figure of St George in armour except his head which contained gems, set in a canopied niche. Behind the statue was a crimson tapestry with his heraldic arms on shields. The tower itself had the message written on it ‘Fluminis impetus letificat civitatem dei’ (There is a river whose streams make glad the city of God ).

In the house next to and behind the tower choirs of boys dressed as angels sang ‘Benedictus qui venit in nomine Domini’ (Blessed is he that comes in the name of the Lord) [ibid, p.104-5).

A second choir, dressed as prophets of the Old Testament, were present at Cornhill where they chanted ‘Cantate domino canticum novum, Alleluia. Quia mirabilia fecit.’ (Sing to the Lord a new song, Alleluia, because he has done marvellous things) and released a flock of little birds ‘of which some descended on to the king’s breast, some settled upon his shoulders, and some circled around in twisted flight’ (ibid, p.106-7).

From there the king’s entourage proceeded to the tower of the conduit at the entrance to Cheapside. This was covered by a green cover bearing the escutcheons of the city’s arms. Under an awning were old men dressed as the Apostles, who on the king’s approach in perfect time sang the psalm ‘Salvasti enim in nos de affligentibus nos, et odientes nos confudisti’ (But it is thou that has saved us from our enemies, and have put them to confusion that hate us). They then gave to the king round leaves of silver, wafers of bread and wine from the conduits ‘that they might receive him with bread and wine just as Melchizedek did Abraham when he returned with victory from the slaughter of the four kings’ (ibid, p. 108-9).

An account of the pageantry from here onwards is provided by Usk (see Given-Wilson [ed] 1997, pp 261-2), again showing the structures and pageants which the City of London had arranged:

‘At the cross in the middle of Cheap, reaching from one side to the other, as far as the church of St. Peter, was a three—storeyed building mounted by a remarkable series of ladders, to which towers and bulwarks and the coats of arms of the kingdom and its princes were attached, the whole thing being constructed from planks, a remarkable example of the skills of both carpenters and painters; it was covered with a large linen sheet decorated in lapidary colours, so that it looked like a wall made of porphyry, marble, and ivory, and on it were written the words, ‘Things glorious are said of thee, thou city of the Lord’; and it was completely filled with models of angels, singers and organs. Six citizens, magnificently dressed, came out of its iron gates carrying two basins made of gold and filled with gold, which were offered to the king. As he approached the lower conduit, chanting virgins came dancing to meet him, accompanied by choirs and drums and golden viols, just as in King David’s time, after the slaying of Goliath. What more can I say? The city wore its brightest aspect, and happiness filled the people-and rightly so. At St Paul’s the king dismounted and went devoutly forward to make offerings at the Holy Cross, the tomb of St Erkenwald, and the high altar, before moving on from there to dine at Westminster.’

The Gesta Henrici Quinti states that such was the dense crowd of spectators in the city that the mounted procession had difficulty getting through to Westminster. The king wore a simple gown of purple, not armour, and the story that his helmet, damaged in the battle, was displayed is a later myth.

On the day after the pageants, according to the Chronicle of London, the mayor and the aldermen of London went to the king at Westminster and presented him with two basins of gold worth £500 which contained gold worth a further £1,000. Then a requiem was held at St Paul’s Cathedral by order of the king.

How do you think this glorious, triumphal return feeds into our knowledge of the battle today?