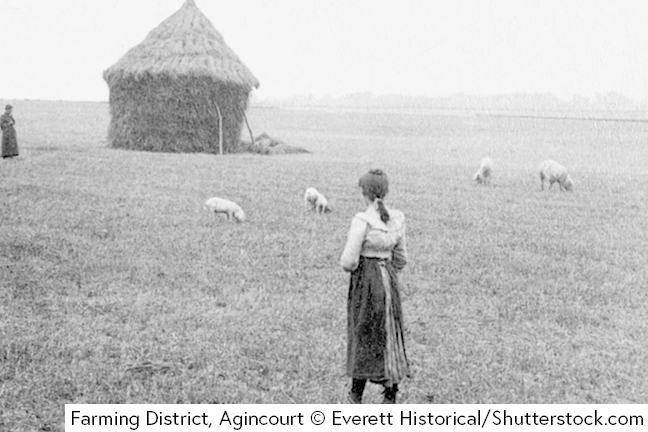 Farming district on the old battleground of Agincourt, France, 1900s.

In this article, Dan outlines how newspapers remembered the battle in subsequent years.

The frequent conflict between Britain and France in the eighteenth century, especially in competition over their embryonic empires overseas, meant that the memory of Agincourt was often invoked by newspapers. A letter published in the General Advertiser on 3 April 1744 made this clear:

‘Agincourt! O glorious day! How great a reverse of fortune didst thou produce…that our arms may be successful; that when Britons strike, they may strike home: that our mildness and lenity misconstrued by the enemy fear, may turn to the enrag’d fury of the lion; and that British valour and the terror of our nation may shine forth with its accustomed éclat is the hearty wish of Sir yours, etc.’

The anniversary of Agincourt on 25 October itself was first noted in a newspaper in 1757 but with the view that the current age marked a falling away from the glories of the past. Agincourt was used to make a political point. It was stated in the London Evening Post, for instance, that since the time of the battle ‘corruption has chased away all the glorious spirit of this nation’.

But Agincourt was also used as a call to arms and an encouragement for contemporaries to try to emulate their ancestors. On 16 October 1794, a letter published in The Times began with ‘Countrymen, remember Agincourt!’ with illusions made to England’s glorious past and the continuing flaws in the French character.

The memory of Agincourt was also referred to by journalists in later conflicts. In 1854, during the Crimean War, when Britain and France were allies in fighting Russia, the Bury and Norwich Post remarked that the St Crispin’s Day speech would have been appropriate for the Charge of the Light Brigade at the Battle of Balaclava. Five years later, when relations between Britain and France had once again deteriorated, with fears of another French invasion present, the Huddersfield Chronicle on 4 June, promoted the martial prowess of the modern day British rifleman, who ‘the Englishmen who fought Cressy and Agincourt would have no right to despise.’

The alliance between Britain and France in the First World War meant that the five hundredth anniversary of Agincourt was commemorated by British and French soldiers in a joint ceremony on the battlefield. This was reported by the Illustrated London News on 11 December 1915. The journalist concluded his report by reflecting on Anglo-Franco comradeship:

‘There could surely be no more convincing or finer testimony to the reality of brotherhood-in-arms now so fortunately established between the soldiers of France and Britain and the closeness of the tie between the nations than this joint celebration of an ancient battle-day of honourable memory to both.’

The sixth hundred anniversary of the battle, in 2015, prompted newspapers to reflect on how and why Agincourt should still be remembered. For instance, in an article published in The Guardian newspaper on 26 September 2015 entitled ‘Agincourt was a battle like no other … but how do the French remember it?’, Robert McCrum reflected on the uncertain legacy of the battle, particularly in France. McCrum noted that certain aspects associated with Agincourt means that it is difficult for modern audiences to celebrate it in the same terms as other historical battles, such as Waterloo. Notably, the English invasion of France was a war of aggression as opposed to liberation, which, combined with the ruthless killing of unarmed prisoners and the one-sided casualties figures, has even led to suggestions that Henry may have been a war criminal.

Share your experiences of newspaper reporting of the battle. How was the battle reported over the period of the 600th anniversary? Do you remember your impressions of the reports?

Have you noticed references to Agincourt in other areas of your daily life? Tell us where.

Put your comments below.

McCrum, R. in The Guardian Newspaper, ‘Agincourt was a battle like no other…but how do the French remember it?’ (2015)