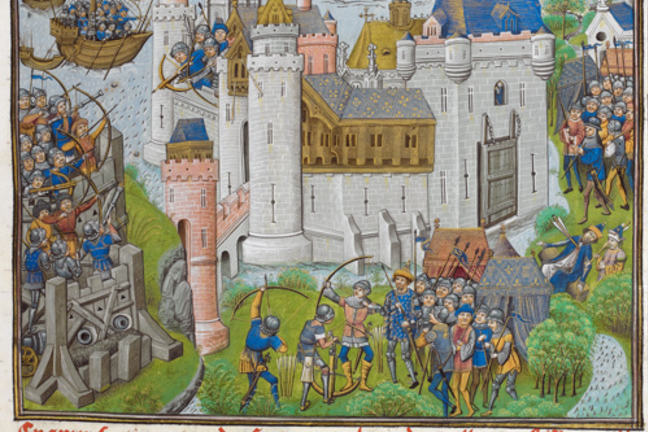 The Siege of Harfleur

In this article, Dan discusses the siege of Harfleur, by the English in 1415. This was one of the first actions in the Agincourt campaign.

Having made landfall in Normandy, Henry organised his army into three divisions, known as ‘battles’, which he then led towards Harfleur. The capture of the town was the first objective of the 1415 campaign, but this was clearly not going to be an easy task because Harfleur was protected by a circuit of walls and 24 towers, enclosing 21 hectares, together with water defences and a defended port.

Furthermore, the population of the town numbered as many as 5,000 inhabitants who were determined to resist an army of foreign invaders. It was for this reason that the defenders felt confident enough to reject Henry’s initial demand for surrender, despite the latter citing the biblical law of Deuteronomy (chapter 20 verses 10- 16), whereby the people of the town could be legitimately put to the sword if they did not yield to him due to his rights as king of France.

We are fortunate that the six-week siege of Harfleur is especially well documented due to the detailed eyewitness account provided by the anonymous author of the Gesta Henrici Quinti (The Deeds of Henry V), which means that it is possible to reconstruct the main sequence of events (translation in Taylor and Roskell [eds], 1975).

The decision to lay siege to the town

The besiegers began by attempting to surround the town, so as to cut off the defenders from any possible reinforcements or supplies. Henry’s brother, Thomas, duke of Clarence, was therefore sent with part of the army to the east side of the settlement. This measure was too belated, however, to prevent a French company of 300 men-at-arms under the command of Raoul de Gaucourt from entering the town. The English then initiated a formal siege by bringing up their siege weapons, such as their guns and mechanical artillery close to the walls.

Gunpowder artillery in particular needed to be deployed at close range to be effective; this meant that these weapons and their operators were vulnerable to the missile fire of the defenders though. It was for this reason that trenches were dug by labourers and large wooden screens known as ‘mantlets’ were created to protect the artillery.

The author of the Gesta gives a vivid account of the destruction inflicted by these weapons, which within a few days had caused significant damage to the walls and towers of Harfleur, in addition to

‘really fine buildings, almost as far as the middle of the town, were either totally demolished or threatened with inevitable collapse’. (Taylor and Roskell, p. 39: 1975)

The French defenders responded to this barrage by carrying out repairs to their defences and making strenuous efforts to harass and resist the English besiegers. This won grudging praise from the author of the Gesta, who remarked that the townspeople used guns, catapults and engines from the bulwarks, walls and towers as long as they could. After these fortifications had been rendered indefensible, they improvised by using screens, ‘shattered openings in walls, and from other places where shelter would not have been thought possible’ (ibid, p.39).

This prompted Henry to adopt other measures such as the digging of mines under the walls, with the intention of collapsing the tunnels, when they were ready, to undermine the defences. These attempts were frustrated by counter-mines dug by the defenders, which either damaged the English tunnels or allowed them to attack the miners whilst still at work. Other English measures included filling the ditches surrounding the settlements with bundles of faggot, so that wooden towers and other siege weapons could be brought up against the walls to prepare for an assault.

Effects of the lengthening siege

The long siege meant that losses began to mount among the English besiegers with deaths and illnesses caused by the outbreak of disease due to the unsanitary conditions. The presence of thousands of men, horses and other animals in close proximity together, along with the waste they produced, meant that the conditions were ripe for infection. This was a perennial problem faced by all armies undertaking sieges in the Middle Ages, with diseases, such as dysentery, often inflicting a greater death toll than those caused by enemy action. We also hear of dysentery within the town.

Throughout the course of the siege the defenders had attempted to counter the measures of the attackers, with a sortie launched by the garrison on 15 September, which succeeded in setting fire to an English siege bastion. It was soon after this event occurred that the English were finally able to take control of the bastions (otherwise known as bulwarks) outside the main gate of the town. According to the author of the Gesta Henrici Quinti, the French attempted to drive away the English attackers outside the barbican, but the latter, under the command of John Holland, earl of Huntingdon, were able to obtain the upper-hand in the fighting. The victorious English were then able to set fire to the barbican using flammable arrows, which eventually allowed them to take control of the fortification, forcing the defenders to flee into the town.

On the following day an attempt to persuade the defenders to surrender was rejected, which led Henry to order that the trumpets should be sounded throughout the army to prepare for an attack and for his guns to bombard the defences heavily so as ‘to prevent them from sleeping and so make them easier to defeat on the morrow’ (ibid, p.49). Although some chronicles claim there was a full-scale assault, the Gesta comments that this did not take place: rather, God

‘struck terror into our enemies, who were quite broken in spirit at the loss of the barbican…sorely troubled by the scourge of the stones and almost despairing of being rescued by the French’. (ibid. p.49)

The author also stated that the townspeople were frightened of the prospect of the settlement being taken by storm, as the law of Deuteronomy permitted the inhabitants to be put to the sword if they refused to surrender on terms. This led to further negotiations with the townspeople and the leaders of the French garrison who entered the English camp to meet with Henry. On 18 September they undertook to yield the town within four days if not relieved by an army of relief, delivering hostages and oaths as surety for this. The message was taken by the sire de Haqueville to the Dauphin who was at Vernon, on the Seine between Rouen and Paris. But at this point the French had not gathered enough troops to give battle to the English, especially as Henry still had his whole army with him.

The defenders of Harfleur formally surrendered the town to Henry on 22 September. The Sire de Hacqueville, ‘along with the others of his company’, returned to the English camp at 8 o’clock in the morning to deliver the keys of the town to the king and the inhabitants gave themselves up to his mercy. On the same day, Henry wrote a letter to the mayor and aldermen of London in which he described the terms under which the inhabitants had surrendered the settlement. He explained that due to the efforts of ‘our faithful lieges’ and the ‘strength and position of our cannon’, the ‘people who were within the town made great urgency to have divers parleys with us’. Despite this, Henry had wished to order an assault on 18 September, but the inhabitants terrified by this agreed to negotiate a surrender which was accepted so as to ‘avoid the effusion of human blood’ on 18 September (Riley, 1868).

On 23 September, Henry rode to the gates of the town, where he dismounted, and then walked barefoot to the parish church of St. Martin where he gave prayers to thank God for his victory. The leading members of the garrison of the town were then permitted to leave on condition that they gave themselves up as prisoners at Calais on 11 November.

As for the inhabitants of the town, those who were prepared to swear an oath of fealty to Henry were allowed to remain. But the place was to become a military establishment: Henry installed a garrison of 300 men-at-arms and 900 archers – a very large force – under his uncle Thomas Beaufort, earl of Dorset. Therefore women, children, the elderly, sick and poor were gathered together and sent out of the town on 24 September. They were escorted to Lillebonne where they were met by Marshal Boucicaut who gave them food and drink, before taking them to Rouen by boat.