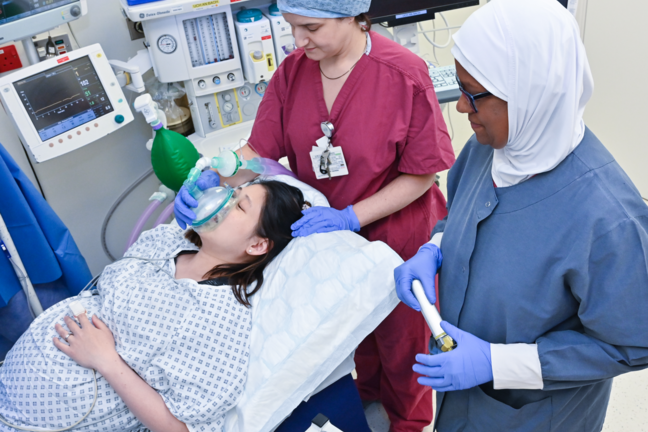 Difficult and Failed Intubation in Pregnancy

In this article Dr Georgia Knight, Obstetric Anaesthesia Fellow and Dr Mary C Mushambi, Consultant Obstetric Anaesthetist at University Hospitals of Leicester, UK and author of the OAA/DAS Obstetric Difficult Intubation Guidelines, explore how to manage the difficult or failed intubation on the labour ward.

The consequences of a failed intubation in the obstetric patient may not only impact on the patient themselves but also on the foetus; this can influence the choice of whether to proceed with surgery or not.

The following opportunities should be taken to prevent a failed intubation scenario:

The first algorithm in the OAA/DAS Difficult Airway Guidelines details how to provide a safe general anaesthetic, focusing on preparation and team planning (Algorithm 1) . 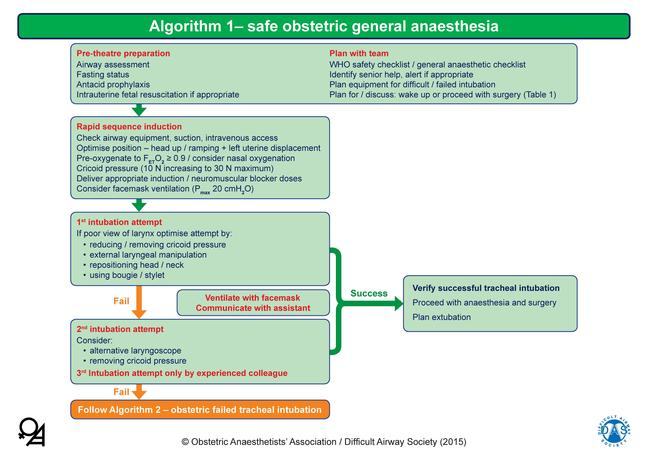 It is important to always have a plan of whether to wake the patient up or proceed with the operation should failed intubation occur. This decision depends on several factors outlined in Table 1 and it should be a shared decision with the obstetric team and communicated clearly with all members of the theatre team before induction of general anaesthesia. 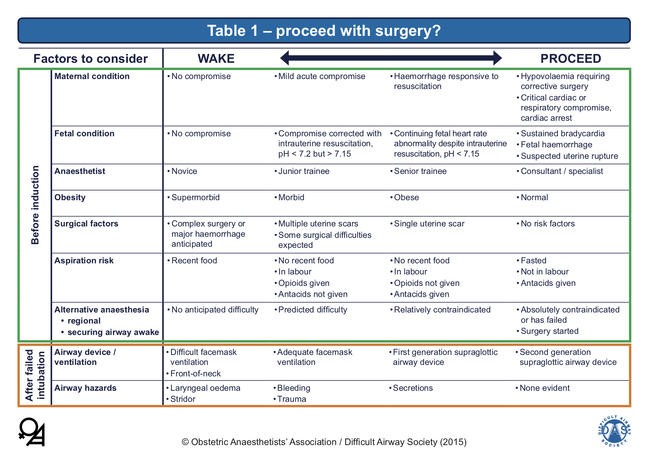 Unless it is safe or necessary to proceed with surgery the patient should be woken up. Strong indications for waking the patient up include no foetal or maternal compromise, having an obstructed airway (identified by noisy breathing, an obstructed capnography trace, or hypoxaemia secondary to hypoventilation), complex surgery, anticipation of major haemorrhage, or if the patient is unfasted. If however, there is adequate ventilation, further intubation attempts are discouraged and continuing with surgery may be prudent particularly if there are other reasons to proceed with surgery such as maternal or fetal compromise, and failed neuraxial or awake intubation attempts previously. However, although the decision is influenced by factors in Table 1 which relate to the woman, foetus, staff and clinical situation, the exact combination will be unique in each individual situation.

The likelihood of intubation success should be maximised by appropriate preparation of the patient before induction, including:

At induction it is important that appropriate doses of induction agents and muscle relaxants are given; it is advisable to have a spare syringe of induction agent to prevent awareness in cases of unexpected difficult intubations. As we heard about in Antje’s story, there is an argument in favour of using propofol as the induction agent of choice in obstetrics for reasons which include ease of drawing up, familiarity, availability and the reduction of errors from the mix up of thiopentone with antibiotics.

Videolaryngoscopes offer improved laryngoscopy view and should be considered as first line for laryngoscopy provided one is available and the anaesthetist is appropriately trained in its use. If the initial laryngoscopy is not optimal, cricoid pressure should be released or reduced to try and improve the view. Airway problems should be communicated after the first failure to intubate, and help should be called for early.

A maximum of two attempts at intubation should be a performed, with the third attempt reserved for a different and more experienced anaesthetist. 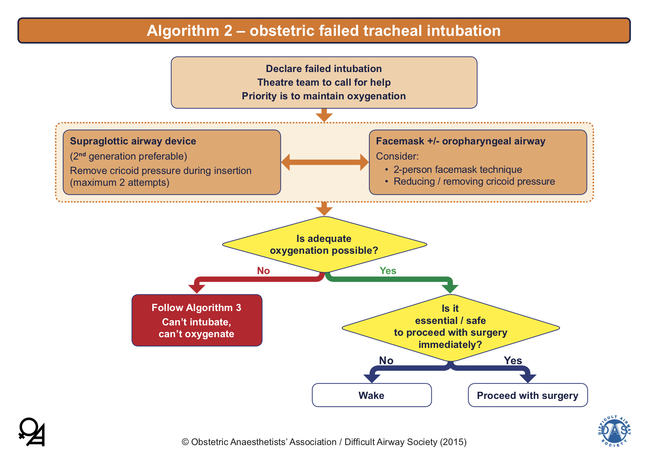 If adequate oxygenation cannot be obtained using these techniques, a ‘can’t intubate can’t oxygenate’ situation should be declared, and front-of-neck airway (eFONA) performed. ENT and ITU help should be sought and laryngospasm should be excluded by ensuring neuromuscular blockade. Awareness should be avoided with maintenance of anaesthesia using intravenous induction agents. The Difficult Airway Society recommend using a scalpel cricothyroidotomy as the technique of choice for front of neck access, as discussed in Week 2.

Management of the patient after failed intubation

There must be a combined obstetric and anaesthetic plan for whether or not to proceed with surgery after a failed intubation. This discussion would have occurred before induction of anaesthesia, but once the failed intubation has occurred, Table 1 should be referred to again and a final decision made. If the airway is secured using eFONA, a decision may again need to be made whether to proceed with surgery (in extreme cases of maternal or foetal compromise) or wake the mother. There is an increased risk of neonatal admission to the neonatal intensive care unit after a failed intubation of the mother, and therefore the neonatal team must be aware that it has occurred. Table 2 in the DAS guidelines describes how to manage the patient on either path of waking the patient up, or proceeding with surgery after failed intubation. 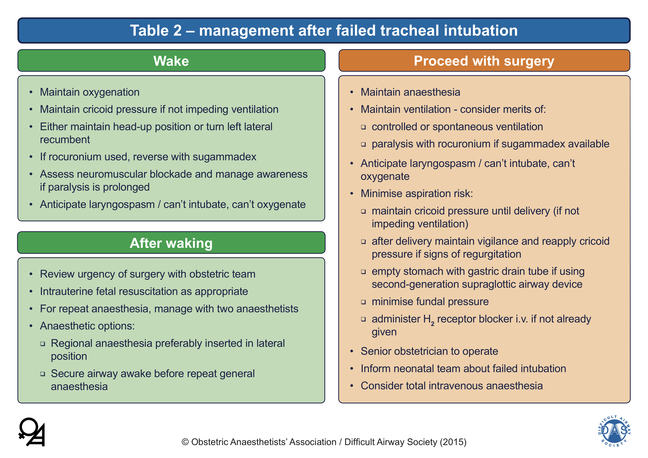 As we learnt about in Week 3 NAP4 showed that 28% of all adverse airway events occurred at the end of anaesthesia and in the recovery. Extubation of the obstetric patient with or without a difficult airway falls in the ‘At risk’ extubation category of the DAS Extubation Guideline and should be managed accordingly.

The provision of general anaesthesia in the obstetric population requires unique considerations due to the physiological changes in pregnancy, environmental factors and urgency of surgery which requires a rapid decision making process that takes into account the safe outcome of mother and baby.

Appropriate team planning and preparation for an RSI on the labour ward should be carried out in order to help to reduced adverse airway events. The OAA/DAS Guidelines are designed to help standardise teaching, reduce the incidence of failed intubation and give guidance on further management should failed intubation occur.

It is important to hold regular airway management training sessions for the whole multidisciplinary team in the obstetric setting.

Have you ever been involved in a case of a failed intubation on labour ward? Did surgery continue or was the mother woken up? Had the plan been discussed beforehand? Please do share your stories with fellow learners but please do ensure all discussions remain confidential.

You can then move on to the next activity on “Airway Management in the Obese Patient”.