This content is taken from the Complutense University of Madrid & L'école nationale vétérinaire d'Alfort's online course, Animal Viruses: Their Transmission and the Diseases They Produce. Join the course to learn more.
View course
5.15 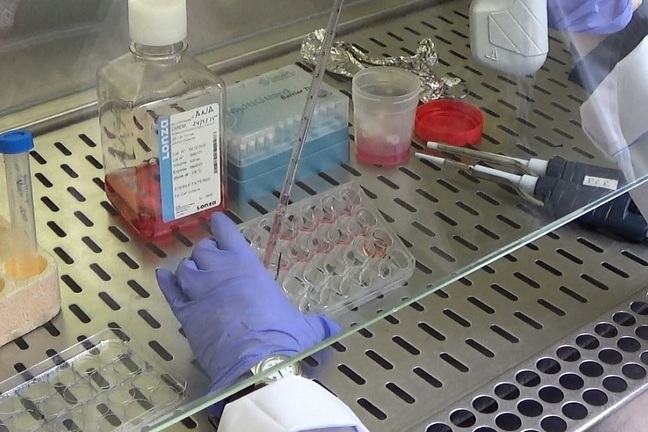 The study of the immune response requires virological techniques

Immunity to influenza virus infections, as in the case of any other viral infections, has two essential components that act in a sequential and coordinated way.

The first line of defence corresponds to innate immunity, which is able to act immediately after an aggression (Step 1.10). In the case of influenza infection, the chemical mediator alpha interferon (IFN-α) plays a key role, creating an “antiviral” state in the cells, making them more difficult to infect. In addition, pro-inflammatory cytokines are responsible for inflammation in the respiratory tract and the onset of the typical symptoms of the disease. Finally, the cells of the innate immune response responsible for the destruction of infected cells are the natural killer cells.

However, despite the beneficial effects of the innate immune response in the first moments after infection, effective control of the infection occurs with the development of the adaptive immune response, which develops during the course of the infection and is specific to the agent causing the infection. This type of immunity is also responsible for the prevention of reinfections. Hence, the degree of protection of an animal is dependent upon the similarity between the virus that caused the first infection, or was the basis of a vaccine, and the virus that produces a second infection.

Antibodies are produced against a limited number of viral proteins. The most relevant ones for protection are those produced against hemagglutinin, which block the binding of the virus to the cell receptor, preventing its infection. These antibodies are called neutralizing antibodies because they block the infection. They may be quantified by the hemagglutination inhibition tests that we have mentioned in the step on diagnosis. Therefore, the results of these tests are not only useful for diagnosis but also to estimate the degree of protection of the animals.

Once the cell has become infected, antibodies directed against neuraminidase, which limit the release of viral progeny from the infected cell and thus, the infection of new cells, play an extremely important role.

In contrast to what happens with antibody production, a wide range of viral proteins stimulate effector cells. Among them, cytotoxic T lymphocytes are especially significant since they are responsible for killing the infected cells, and therefore clearing up the infection. 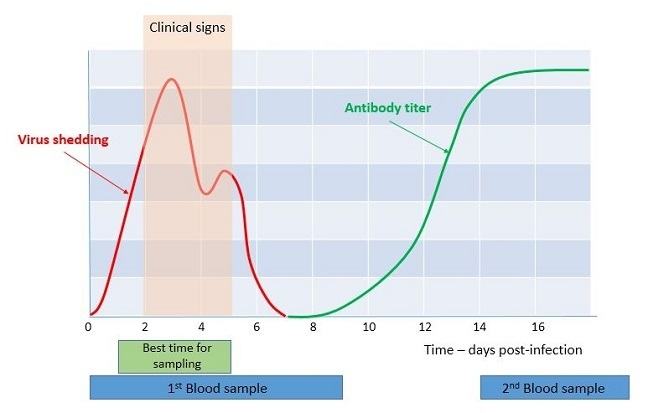 The immune response to the influenza virus (unlike what happens in other viral infections) is very fast and effective. Seven days after infection we can detect both antibodies and a specific cellular immune response. Antibodies peak at 2-3 weeks post-infection, and this increase in titres can be used for serological diagnosis of the disease. Titres remain stable for a period of about 8-10 weeks to descend later.

As we have just mentioned, the immune response is very effective and leads to the clearance of virus from the respiratory tract in a period of approximately 1 week. That is why it is so important to take samples for the diagnosis of the virus in the very first few days after infection.

The immune response is also very effective in preventing reinfections by the same virus and immunity can even last years. However, the virus is able to circumvent previously existing immunity by its constant change and the successive circulation of different viral variants against which the immune response is not effective. If the changes are small, such as in antigenic drift, the population will show partial protection and the disease will be relatively mild, appearing to be what we call seasonal influenza. If, on the contrary, the changes are more extensive, as in antigenic shift which is a recombination between strains, we will be facing completely new viruses and the protection of the population will be practically non-existent, leading to serious outbreaks and, in the worst case scenario, a pandemic.

This is why it is so important to constantly update the vaccines with the viruses that are circulating in the population, which are identified through epidemiological surveillance programs. However, due to the high efficacy of the adaptive immune response developed against a particular virus and the knowledge of the proteins involved in the stimulation of a protective response (primarily hemagglutinins), influenza vaccines are inactivated vaccines or even, in the case of human influenza, recombinant vaccines (based on hemagglutinins). These have the advantage of being very safe without compromising efficacy. Furthermore, these vaccines can be more easily updated than modified live vaccines.

Today you are gathering information for your local newspaper, which will have a section of the next issue on vaccines against influenza. Please, choose an animal species (pig, poultry, horses, humans) and look for what types of vaccines are used in your country or region. In what situations are the vaccines for this species needed? Is there a need for repeated doses? Share the information with the other learners.