The theory of polymedia

The last video showed that in China, just like elsewhere people use a wide range of different social media platforms, albeit a completely different set of platforms from those found in our other sites.

This raises the question of whether there is a more general way in which people orient themselves towards social media despite the fact that they may be from different cultures, and in the case of China, use completely different platforms. One possible way to explain this has been proposed through the theory of polymedia. 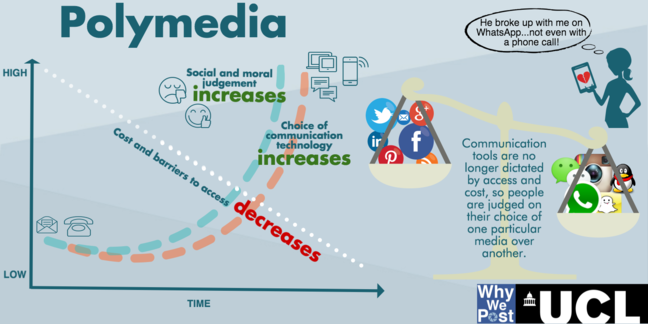 What is polymedia? In the past the reason people chose one media rather than another was usually a question of either cost or access. Today we have a much wider range of communicative tools at our disposal – lets say smart phones, fixed telephones, text messages, broadband internet, email and all those different kinds of social media platform. Also the choice is now more to do with whether you want to avoid a quarrel, use the platform you feel more confident about, or the one that avoids a certain audience. But as a result you may be judged on which platform you chose. It was worse being dumped by text message than by phone. So, in effect, Polymedia is a theory of how media choice has become more of a social and moral issue instead of one of cost and access.

Different media may be associated with certain feelings or assumed to possess certain characteristics. For example, Momo is another social media platform in China. It is a smartphone-only app where people use the phone’s GPS to display a contact list of people sorted by distance from the user, which can be filtered by Gender.

Although other Chinese social media apps, such as WeChat’s ‘People Nearby’ and QQ for mobile may have very similar functions, for high-school students, university students, and adults in their twenties Momo’s reputation preceded it: the app was associated with ‘one night stands’. During interviews we carried out with young people, the mention of Momo was usually enough to provoke a wry smile from participants.

There is nothing inherently different about Momo itself. It has gained its reputation from the pattern of its usage. Similarly, the social media platforms QQ has come to be regarded as more ‘rural’, whereas WeChat is seen as being more ‘urban’. in our rural Chinese fieldsite, QQ was indeed the most popular platform. By contrast, in Industrial China many of the migrants, who had previously been using QQ when they were in the countryside, were now increasingly using WeChat. However this process was not automatic, it reflected an emotional engagement people had with each platform. Using WeChat was part of the process of becoming urban. While moving away from QQ was seen as rejecting what they saw as the ‘backward’ life of the countryside. However sometimes there were certain relationships that were still appropriate to conduct via QQ, such as communications with certain people remaining in their hometown.

The theory of polymedia tries to show how, in a situation where people have the option of many different media to communicate with, the platform people choose can have significant consequences for their social relationships. It means that in order to understand any single communication channel we must think about the whole package of media available to the person.