A story about polymedia

In the last video the theory of polymedia was introduced as a potential way to understand how people understand and manage the whole range of social media platforms which are available in their daily life. Now we will try and see whether it works in China by looking at the story of a female factory worker in our Industrial China fieldsite. Huang Ling is a 19-year-old factory worker. She started to use QQ five years ago, and recently she started to use WeChat since she got her first smartphone. Most of the time Huang Ling used her new device to talk with her friends and posted many updates about her new relationship. But our story unfortunately starts when Huang Ling was dumped by her boyfriend… 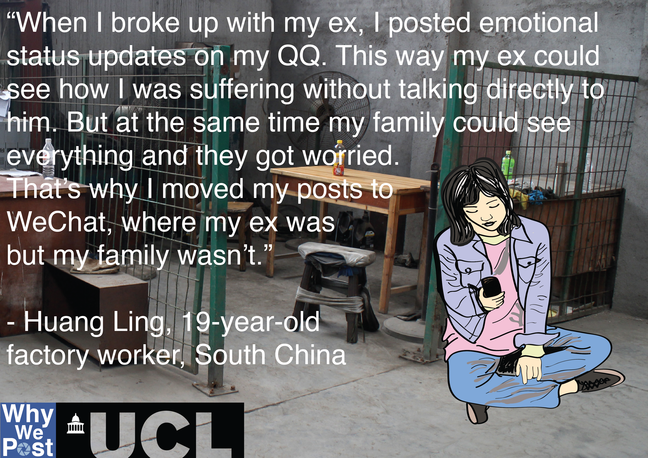 One of the first things Huang Ling did following the break-up was to delete her ex’s telephone number. Meanwhile she posted many emotional updates about how much she was suffering from the break up on her QQ. Huang Ling had no direct contact with her ex since they no longer talked on the phone or met up. However, she still somehow wanted him to know that…”hey I am suffering”. So she was using QQ to talk to him indirectly. Sounds ideal, right?

However that caused her some unexpected problems, because she forgot that some of her relatives of a similar age were her QQ friends. One of Huang Ling’s cousins immediately called her very late one night when he saw her ‘unusual’ QQ status update. She felt so embarrassed to have to explain the reason to him and realised if her cousin knew, her cousin’s parents and her parents would soon know everything since there are no secrets in a big family. Sooner or later she knew she would have to explain the reason of break-up to everybody. Such a nightmare!

Meanwhile, during the four days that her QQ profile was locked, Huang Ling moved to WeChat. Her postings on WeChat were very emotional and even dramatic. One day, she used a steel ruler to carve the Chinese characters for hate (hen) and love (ai) into her flesh, and then uploaded the photo of her bleeding arm to the Moments page on her WeChat. Huang Ling explained:

“My WeChat network is much smaller, you know, most of them are new friends, so I can at least upload it onto my WeChat without causing any trouble for myself…and my ex is also my WeChat contact, he can still see…”

There are several things we can learn from this short story. Firstly, Huang Ling’s problem with QQ is quite a general issues when family members become social media contacts. Immediately there can arise a concern with what family members may think about what they see online, which then constrains what can be posted. It also shows how different social media may have different audiences, which may be the solution to this problem of family surveillance. Through the daily use of social media people soon become more and more skilful in terms of managing different social groups and different platforms as well as expressing themselves to different audiences.

Do you think this example would be equally applicable in a non-Chinese context? Please use the comments to share your views with others.