0:04Skip to 0 minutes and 4 seconds Welcome to this lecture on the emergence and spread of antibiotic-resistant bacteria. This lecture explains how antibiotic-resistant bacteria can increase in numbers when exposed to an antibiotic, and how they can spread between people, animals, in society, and across the world. Antibiotic resistance is a natural process. Mutations and other changes in the bacterial DNA happen continuously, and by chance, some bacteria will change so that they’re able to survive antibiotic exposure.

1:03Skip to 1 minute and 3 seconds As long as the antibiotic is there, the resistant bacteria have no competition and can increase in number. The end result is a bacterial population consisting of mainly resistant bacteria.

1:19Skip to 1 minute and 19 seconds If we then look at what happens inside the human body when we have a bacterial infection, we see a similar pattern. Any resistant bacterium that is present will survive antibiotic treatment and can start to increase in number. This can ultimately lead to treatment failure, although this depends on many factors such as how well you own immune system can take care of the infection.

1:46Skip to 1 minute and 46 seconds At the same time, an antibiotic treatment will also have an effect on the bacteria that normally lives in the body. The so-called normal flora that have nothing to do with the infection in question. Instead, these bacteria often have beneficial functions for humans. They can, for example, degrade food or protect against pathogens. Resistance can also develop in the normal flora. And similar to at the site of infection, the antibiotic will allow these resistant bacteria to increase in numbers. This could become a problem later in life if the resistance spreads to bacteria that can cause disease, or if bacteria from the normal flora cause an infection. Once the resistant bacteria increase in number, the risk for spread increases.

3:33Skip to 3 minutes and 33 seconds Point 4 describes spread within the community. Humans sometimes receive antibiotics prescribed to treat infections, or sometimes self-medicate with antibiotics. Particularly in settings where antibiotics are easily available. However, bacteria develop resistance to antibiotics as a natural adaptive reaction. Antibiotic-resistant bacteria can then spread from the treated patient to other persons.

4:33Skip to 4 minutes and 33 seconds Point 7 and 8 highlights the role of international travel. Travellers requiring hospital care while visiting a country with high prevalence of antibiotic resistance may return with antibiotic-resistant bacteria. Even when not in contact with health care, travellers often become carriers and import resistant bacteria acquired during travel. So, in conclusion, antibiotic resistance will eventually develop to any antibiotic. The more antibiotics we use, the more likely it is that resistance is maintained among the bacteria. The resistant bacteria can then spread between people, animals, and in the environment via multiple routes. It is unclear exactly how much each of these routes contributes to this process, but all of them play a role in the worldwide emergence and spread of antibiotic-resistant bacteria.

Emergence and spread of antibiotic resistance

Listen to Maria Pränting explaining the mechanisms behind antibiotic resistance and spread of resistant bacteria. 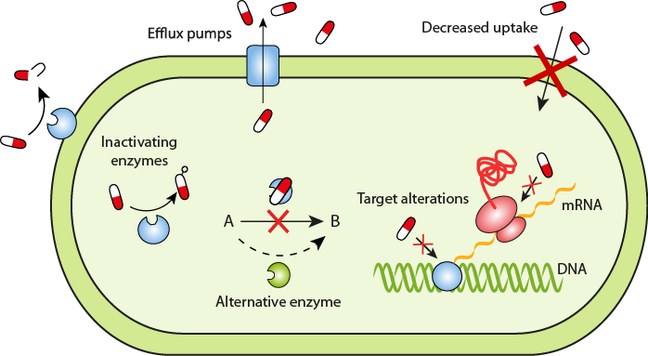 Resistant bacteria spread via many routes. Poor hygiene, poor sanitation and poor infection control are three interconnected key factors contributing to the spread of resistant bacteria in health care facilities as well as in the community. Bacteria know no boundaries and international traveling and trade help disseminate resistant bacteria across the world. This contributes to the complexity of the antibiotic resistance problem and underpins the fact that it is a global issue. Here follows an overview with descriptions of some of the ways resistant bacteria can spread.

Health care facilities are hot spots for resistant bacteria, since many sick people are in close vicinity of each other and antibiotic usage is high resulting in selection and spread of resistant strains. Poor hygiene practices may facilitate spread of resistant bacteria via the hands or clothes of doctors, nurses and other health care staff as well as via patients or visitors. Other risk factors include crowded wards, few isolation rooms, improper cleaning of the facilities and instruments that are used in patient care.

Between people in the community

Bacteria can spread from one person to another through direct contact between people. Transmission can also occur indirectly, for example when someone coughs. If a person contaminates a surface (such as a doorknob) with bacteria, these bacteria can be transferred to another person who touches the same surface. Good hand hygiene is important to limit spread of pathogens and the risk of becoming a carrier of resistant bacteria. Still, even with good hygiene practices, bacteria are a normal part of our surroundings that we will be continuously exposed to.

From animals to humans and from humans to animals

Bacteria can spread from animals to humans, but also the other way around. Many people come in close contact with animals in their daily life as we keep them as pets in our homes or raise animals for food. Resistant bacteria are common in livestock and there are several examples of how farmers and their families have become colonized with the same resistant bacteria as their animals. Likewise, livestock veterinarians are at risk of carrying livestock-associated resistant bacteria. The bacteria may then spread further in society. Resistant bacteria are also found in wildlife and migratory birds but this probably has a limited impact on the increasing rates of resistance in humans.

In many animal farms, antibiotics are used in large quantities to prevent and treat infections as well as for growth promotion, and therefore many farm animals have become colonized with antibiotic-resistant bacteria. During slaughter or when processing the meat, these bacteria can potentially be transferred to the product. Furthermore, fruits and vegetables can become contaminated with animal feces directly from the animals or via contaminated water that is used for irrigation of the crops. Eating food contaminated with bacteria may directly cause an infection, such as diarrhea caused by salmonella, campylobacter and E. coli. Resistant bacterial strains, or genes encoding resistance, may also be transferred to the normal flora of the consumer without causing an infection. The resistant bacteria can potentially cause infections later on and spread to other people.

Resistant bacteria are frequently detected in chicken and meat. However, the impact this has on human health is currently not known and may differ in different parts of the world. Some studies demonstrate similarities between the antibiotic-resistance genes found in meat and those found in human pathogens, while other studies have not seen this connection. More research is needed to determine the scale of the problem. Proper cooking and handling of food helps to decrease spread of infections as well as resistant bacteria.

Bacteria can spread via drinking water or water supplies that are used for irrigation, washing cooking utensils or for hygienic purposes. There are many ways resistant bacteria can end up in the water; release of untreated waste from animals and humans is one important source. Resistant bacteria have been found in many water sources such as drinking wells, rivers and effluents from wastewater treatment plants. Several bacterial diseases can spread via contaminated water, including typhoid fever and cholera.

Go to Downloads at the bottom of this step to access factsheets about the spread of antibiotic resistance by ECDC, CDC and WHO. There is also a downloadable PDF containing the slides from the above lecture with Maria Pränting.