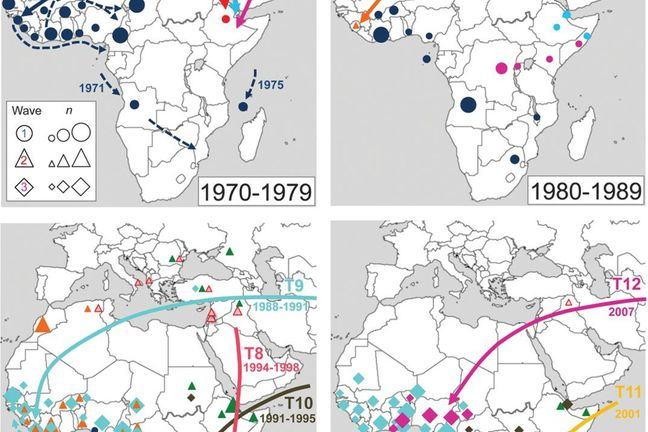 Case study 1: History of the seventh cholera pandemic in Africa

Cholera is an acute diarrhoeal disease caused by ingesting food or water contaminated with the bacterium Vibrio cholerae. Some people develop water diarrhoea with severe dehydration, which can lead to death if untreated. The disease spreads between humans in areas with inadequate access to clean water and sanitation [1].

Despite being thought of as an ancient disease, cholera still affects 47 countries world-wide and claims the lives of nearly 100 thousand people a year [2]. Since the 1800s, there have been seven cholera pandemics around the globe, resulting in millions of deaths. The current and ongoing pandemic, which began in the 1960s, is caused by a single lineage of Vibrio cholerae, called 7PET. Africa is the continent most affected by the current pandemic, although the origin and propagation routes of the disease remain undefined. The seventh cholera pandemic (7PET) began in 1961 in Indonesia, before spreading globally, in particular to South Asia (1963), Africa (1970), Latin America (1991), and the Caribbean (i.e., Haiti) (2010).

In November 2017, researchers at the Wellcome Sanger Institute (UK), Institut Pasteur (France), and collaborators from across the world, published two studies on the history of cholera outbreaks in Africa, Latin America and the Caribbean during the past 60 years. In this study [4], scientists analysed over 1200 historical cholera samples from across the globe, some dating back to the 1950s.

The authors noted that V. cholerae isolates in Africa became increasingly resistant to antibiotics over time. The figure below - which corresponds to Supplementary Figure 9 in the original publication [3, 4] - shows an increase in the average number of antimicrobial resistant genes (ARGs) per isolate over time (panel A), both in Africa and Asia. 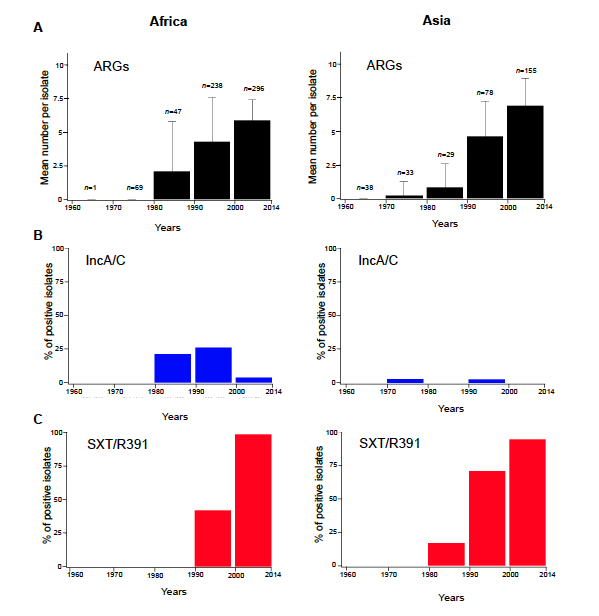 Figure Footnote: “Evolution of antibiotic resistance determinants over time in 7P V. cholerae El Tor isolates from Africa and Asia. Panel “A” shows the change in the mean number of antibiotic resistance genes (ARGs) per isolate over time. The number of studied isolates (n) is indicated. Panels “B” and “C” show the percentage of isolates containing an IncA/C plasmid or a SXT genomic island, respectively.”

The SXT-R391 genomic island is a ~100-kb integrative and conjugative element (ICE) encoding resistance to multiple antimicrobials in V. cholerae. ICEs are able to transfer by conjugation and integrate into and replicate as part of the bacterial chromosome. Five main groups (i.e. versions) of the SXT-R391 genomic island have been described, wherein ICEVchInd5 the most frequently represented [5]. Each group possesses a different complement of antimicrobial resistant genes (ARGs).

We will use the original published genomic data to identify the origin(s) and global spread of the seventh Cholera pandemic in Africa [4]. This dataset consists of 1,070 V. cholerae isolates collected across 45 African countries over a 49-year period. We will particularly focus on multidrug-resistant sub-lineages to understand what has been driving the increase of multi-drug resistant cholera cases in Africa during the last decade. We will use MicroReact to explore the phylogenetic tree of these 1,070 V. cholerae isolates and isolate metadata on the country of origin, year of isolation, antibiotic resistance phenotypes and the presence of antibiotic resistance genes and mutations. Use this existing MicroReact project (https://microreact.org/project/6d8KOOQRy) to explore the data, following the instructions given in the next video.