This content is taken from the BSAC's online course, Antimicrobial Stewardship for the Gulf, Middle East and North Africa. Join the course to learn more.
View course
3.2

Antimicrobial Stewardship for the...

0:58Skip to 0 minutes and 58 seconds First, we need to confirm the outbreak. We need to alert, keep people from the infection control programme and the antimicrobial stewardship programme, come up with the case definition, compare it to the baseline rates, prepare line listing, and come up with an epidemic curve based on date, time, place, and persons affected. And we need to initiate preliminary measures. I’m going to give an example of an outbreak that was investigated in my institution. We got a call from the microbiology lab that there were four cases of acinetobacter multidrug-resistant infections in the medical ICU. Subsequently over the next four weeks, we had 16 other cases reported. But first we needed to establish the existence of an outbreak. We verified the diagnosis.

1:55Skip to 1 minute and 55 seconds We came up with the case definition, which was infection with acinetobacter in patients admitted to the medical ICU. And the investigation required reviewing all the cases that were infected to ask the right questions, to look at common sources, to do environmental cultures, look at all the procedures that the patients had in the operating room, look at the diagnostic test that they’ve had, and look at all the antibiotics that they have received prior to being infected with the pathogen. So we needed to develop a hypothesis, look at the source, the mode of transmission and predisposing factors. And the preliminary results showed that a lot of the patients that were infected had invasive procedures. Many of them had devices.

2:49Skip to 2 minutes and 49 seconds The environmental cultures that were taken revealed that the CT scan machine, the keyboards and the computers used in the medical ICU, as well as two of the ventilators, were also positive for cultures. We looked at the comorbidities of the patients, how many underwent radiographic procedures. And we also looked at the common medical as well as nursing staff taking care of the patients. There were many findings in this outbreak. First, there was lack of compliance with infection control practises that was detected by the surveillance camera. All the patients who had acinetobacter pneumonia had been ventilated. And when we looked at the outcome of the patients that were infected, most of them had prolonged hospital stay.

3:40Skip to 3 minutes and 40 seconds And the mortality rate of these patients who were infected was 67%. All patients had received carbapenems. And after doing the line listing and the epidemic curve, we identified the source to be the CT scan machines and the ventilators, as mentioned before. So the intervention required multidisciplinary efforts, aggressive cleaning of ventilators, all the surfaces, and particularly of the CT scan machines after each patient’s use. Multidisciplinary meetings were done every single week. Education training was enforced. Chlorhexidine bathing on a daily basis for all patients in the ICU was implemented. We also monitored the implementation of the bundle approach for health care associated infections in the ICU.

4:35Skip to 4 minutes and 35 seconds Feedback on hand hygiene was given to all the health care workers on a weekly basis to improve the compliance and we communicated all the findings with the ICU staff on a weekly basis. The Anti-Microbial Stewardship Programme had a major role in the investigation and containment of this outbreak. As I mentioned, all the patients had received carbapenem. So this alerted the antimicrobial stewardship team to implement very strict rules about the use of carbapenems in the ICU. All the patients who received a carbapenem were audited. And those who had infections that could be treated by other drugs were switched to drugs other than carbapenems. The duration of therapy was shortened for all the hospital-acquired infections.

In this video, Dr Souha Khanj discusses what an outbreak investigation is and the role of AMS.

She covers what an outbreak is, how it is assessed, the challenges of an outbreak and the components of an investigation.

The example of the Acinetobacter multi-drug resistant outbreak highlights the need for an efficient and rapid outbreak investigation procedure. The hospital was able to quickly:

They were able to efficiently develop a hypothesis, identify a source, mode of transmission and predisposing factors. The intervention was multidisciplinary, with the AMS team playing a big role in the intervention. Rapid reporting of the MDR pathogen from the microbiology lab to the AMS team was vital in containing the outbreak. 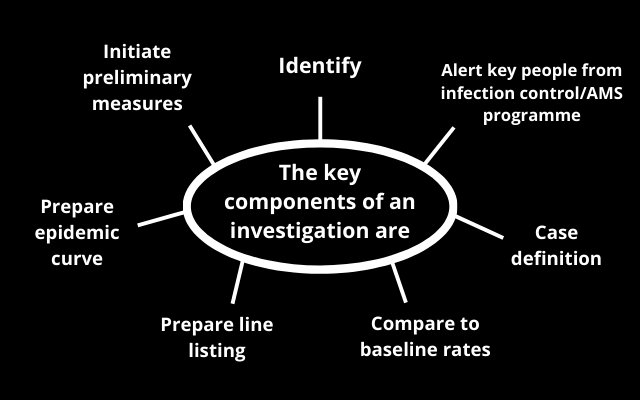 Discuss the following in the comments below: