This content is taken from the BSAC's online course, Antimicrobial Stewardship in Veterinary Practice. Join the course to learn more.
View course
2.13

0:16Skip to 0 minutes and 16 seconds So of course, we’ve had massive reductions in the amount of high priority critically important antimicrobials that we’re prescribing now, to the point where we don’t stock them anymore, because people don’t even ask for them anymore. So that has decreased. We did have a small increase in total use of antimicrobials at first, just because of the change, the shift in the class of antimicrobials we’re using. But over time, as we’ve really been focusing on working with farmers to improve herd health and management to reduce their overall use of antibiotics, the overall antibiotic use, at least in our dairy farms we’ve been looking at, has been reducing over the years.

1:27Skip to 1 minute and 27 seconds And so as vets, we’re now working much more with farmers to get the impression of what they see as priority areas for their farms so that that’s where we can focus our efforts on rather than just having a blanket across to the farmers, you need to reduce all antimicrobial use. We’re trying to work a lot more sort of synergistically with the farmers with herd health planning and doing things like medicine audits that so that they can understand what their antimicrobial use is on their farm.

1:54Skip to 1 minute and 54 seconds We drill down a little bit into where the biggest uses are and what the concerning uses are for the farmers, and then using those medicine audits, we can track a change through time of the antibiotic use on the farms. So I think that kind of shift in how we use the data that we have has been quite a big outcome of shifting towards more responsible antimicrobial use, both with regards to trying to change not using critically important antimicrobials, but trying to use other class of antimicrobials more specifically.

2:30Skip to 2 minutes and 30 seconds So pretty well. So it has to be– you have to do it in a format that’s understandable and reasonable to them. So different farmers like different metrics. And in the most easy of cases, particularly on farms, now that we have stopped big changes in the antibiotics that we’re prescribing, farms are using very much similar antibiotics year on year, it can be as simple as just tallying bottles of antimicrobials, if they’re using similar drugs. And that is obviously a really accessible and understandable way for the farmers to understand their medicine’s use.

3:02Skip to 3 minutes and 2 seconds But obviously, if they’re changing the different types of antimicrobials they’re using, you have to go to using something like dosage metrics or even just how much they’re spending on their antimicrobial costs every year. So yeah, that’s been pretty useful. It can be a bit more labour intensive for the vets to do that kind of thing, but it means that the farmers can track their– track, at least compared to their own farm, track year on year the antimicrobial use. And in some cases, we have done some benchmarking with other farms.

3:34Skip to 3 minutes and 34 seconds And again, that really opens up how they understand where they’re sat and I know practices, other practices, are doing a lot of that, and I think that’s actually really valuable to the farmers to know where they’re sat compared to their peers.

3:51Skip to 3 minutes and 51 seconds So I think all the things that have gone around the changes in antimicrobial prescribing changes. So for example, making protocols with the team, making protocols for specific farms, and communicating, drilling down into information for a specific farm. That has really helped me gain confidence in my prescribing, particularly prescribing fewer antimicrobials, prescribing more first line antimicrobials, knowing that I’ve got a team behind me who will support me and more senior vets who are behind me to support me in those decisions when I make them.

4:29Skip to 4 minutes and 29 seconds And I also got a lot in doing the research that I did for my residency and in writing the paper, looking at reducing critically important antimicrobial on dairy farms, I’ve got a lot more confidence in the knowledge that the literature, the evidence base is behind what we’re doing and what I’m doing, because we have reviewed it and I’ve read around the subject and know that I’m working within evidence based parameters.

In the video above, Andrea Turner from Langford Farm Animal Practice, discusses the outcomes to improving AMS in her practice. She answers the following questions:

In the article below, Jenny Bellini and Eleanor Price, discuss how AMS looks in their practice, Friars Moor Livestock Vets. 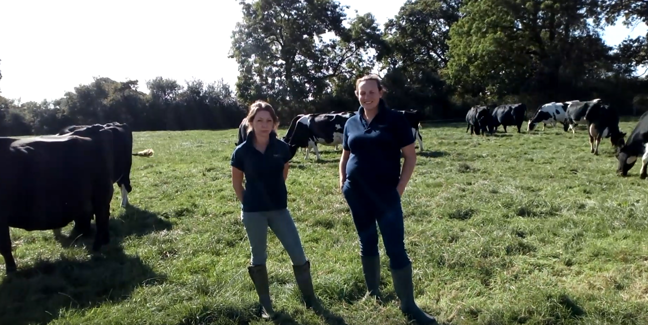 How did you implement antimicrobial stewardship in your practice?

In 2015 we launched a campaign to drive responsible prescribing in our practice. Our aims were to eliminate the use of HP-CIAs and to reduce overall use of antibiotics.

Over the past 4 years we have had huge success in achieving what we set out to, with everyone at the practice, farmers and vets alike, interested in AMS. Our average antibiotic use on our dairy farms has fallen by a third and we have not used HP-CIAs on our farms since 2016.

We implemented this through team work, excellent communication and generating farmer engagement. We used reporting and benchmarking to get farmer engagement, through meetings, newsletter articles and one-on-one farm discussions. Having the whole team of vets and office staff on board was critical to our success.

What have been the outcomes of implementing AMS for your practice, your vets and your clients?

Hugely positive experience for all, with a great sense of team work and achievement felt amongst vet and clients. Our farmers are proud to have led the way with eliminating HP-CIAs from their farms, many now see it as a competition to reduce antibiotic use and improve things further.

As a practice we have reduced antibiotic use by one third on our dairy farms over 5 years, and increased vaccine and NSAID penetration on our farms. We do more herd health advisory visits to help prevent disease through management, nutrition and housing.

What would be your 3 top tips for practitioners who want to implement AMS in their practices?

Which of the policies mentioned in this step could you introduce to your own practice?

An article by Jenny Bellini and Julian Allen can be found in the see also section. This provides a detailed account of how the team at Friars Moor managed to reduce their antimicrobial usage.

Another article by David Tisdall, Kristen Reyher and David Barrett can be also be found in the see also section and this describes how to achieve responsible medicines use at practice and farm level.