0:09Skip to 0 minutes and 9 secondsHaving considered the wide range of antimicrobial agents that are important in wound care, let us now turn our attention to antimicrobial resistance. This is not a new phenomenon. It is a natural process and we have many examples to prove this point.

1:28Skip to 1 minute and 28 secondsThe first person to really understand the implications of the overuse of antibiotics was Alexander Fleming. In 1945, during his Nobel laureate speech, he warned about the dangers of under- dosing and of exposing microorganisms to non-lethal quantities of an antibiotic. A year later, he predicted that there might be no antimicrobial agent to which under certain circumstances microorganisms could not acquire resistance. Sadly, this statement seems to be true today, and now we clearly understand that in the presence of an antibiotic, susceptible organisms are inhibited whereas resistant strains are not. Antimicrobial resistance comes in three forms. The first one is known as transient resistance or tolerance.

2:28Skip to 2 minutes and 28 secondsThis does not involve a change in the genetic complement of the organism but rather a change in the expression of established genes. And this can be influenced by environmental conditions. A good example here is a bacterium that is susceptible to an antibiotic when it is free- living. However, when it forms a biofilm, it displays resistance to the same antibiotic. One of the reasons for this is that in a biofilm, the metabolic rate of microorganisms is slowed down. If the organism becomes free- living again, it would show susceptibility to the antibiotic.

3:14Skip to 3 minutes and 14 secondsThe second form of antimicrobial resistance is known as innate or intrinsic resistance. Here there is no recent change in the genetic complement of the organism but due to its structural functions it is inherently resistant to the antibiotic. An example is Gram- negative bacteria. Due to the outer membrane on the surface of their cell wall, it becomes impossible for many antibiotics to penetrate this layer and reach the interior of the cell. And this makes the microorganism resistant. The third form of antimicrobial resistance is known as acquired resistance. Here there is a genetic change, and it can arise in many ways.

4:01Skip to 4 minutes and 1 secondOne way is a mutation which could arise either spontaneously, at a low rate, or it could be induced by a chemical agent. Secondly, it could arise by gene acquisition. Bacteria can transfer genetic elements known as plasmids from one cell to another, and these can carry resistance genes. Once an organism acquires these genes, it can continue transferring them to surrounding organisms and even to different species.

4:39Skip to 4 minutes and 39 secondsUntil that resistant strain is exposed to an antibiotic, its resistance might not be apparent. Antibiotics tend to work by targeting a specific site in a cell. Now this may be the cell wall, the ribosome, or the nucleoid. There are five ways in which microorganisms can overcome the effect of an antibiotic to become resistant. The first one involves acquiring genes that code for an enzyme that breaks down the antibiotic. A good example of this kind of resistance is to beta-lactam antibiotics, and it arises by the acquisition of genes that code for beta-lactamases that degrade this kind of antibiotic. A second mechanism is the change in the structure of the target site of the susceptible cell.

5:40Skip to 5 minutes and 40 secondsHence the antibiotic can no longer bind to that target site and inhibit any of its processes. An example of this are the antibiotics that interfere with protein synthesis in bacteria.

5:57Skip to 5 minutes and 57 secondsA third mechanism is the acquisition of genes that code for either one enzyme or a whole pathway that allows a cell to have an alternative metabolic route that would otherwise be inhibited by the antibiotic. An example of this is resistance to sulfonamides.

6:18Skip to 6 minutes and 18 secondsThe fourth mechanism of resistance is acquisition of genes that reduce the permeability of the cell envelope and hence make it difficult for the antibiotic to reach the interior of the cell. And lastly, the fifth mechanism of resistance is due to acquisition of genes that code for efflux pumps on the cell membrane of a bacterium. They allow the cell to pump the antibiotic out of the cell. The antibiotic gets into the cell but due to being constantly pumped out it does not reach a concentration within the cell that is inhibitory. This is a diagram to illustrate the five mechanisms that I previously described. And the image is available to review at your leisure below this video.

7:35Skip to 7 minutes and 35 secondsPenicillin was the first antibiotic to be introduced and immediately after that several antibiotics were introduced and developed for clinical practice. As we move from the left-hand side to the right-hand side of the image, we can see that there is a significant decrease in the production of new antibiotics in recent times.

7:58Skip to 7 minutes and 58 secondsThe image also shows how antibiotic resistant strains eventually emerge against antibiotic just as Sir Alexander Fleming predicted. Because of the continuing emergence of antibiotic- resistant strains, pharmaceutical companies are using less resources to produce new antibiotics. They have realised that sooner or later antibiotic resistance will arise limiting the effectiveness of the drug and any associated financial rewards. As time progresses, we see that the pipeline for antibiotic discovery is drying out and there are very few antibiotics currently under development. In fact, no new classes of antibiotics have been discovered since the 1980s.

WHO defines antimicrobial resistance (AMR) as the ability of a microorganism to stop an antimicrobial from working against it. As a result, standard treatments become ineffective and infections persist and may spread to others.

• Enzymatic degradation of the antibiotic.

• Structural changes in the target site that prevent binding of the antibiotic.

• Acquisition of alternative enzyme(s) or pathways that avoid the target site of the antibiotic.

• Reduced permeability of the cell envelope to prevent ingress of the antibiotic.

• Acquisition of efflux pumps that remove the antibiotic from the target cell. 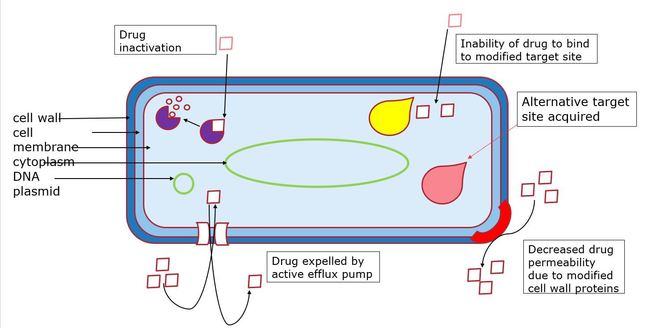 Which resistance mechanism do you think is the most difficult to tackle? Post your thoughts in the comments section below.

Explore perioperative medicine and how you can improve care for the high risk surgical patient. Join this RCoA endorsed course.