This content is taken from the University of Reading's online course, Understanding Anxiety, Depression and CBT. Join the course to learn more.
View course
4.8

0:17Skip to 0 minutes and 17 secondsOK, Kate. So thank you very much for talking me through your homework. And you particularly focused on the toughest day, which was Tuesday. And as you were talking, I was really struck by this sort of time after lunch having been particularly difficult. Yeah. I think it was because just the fact that I couldn't answer the phone. I kind of felt guilty. I just couldn't face, you know, cause I think my boss was just going to ask me when I was coming back to work. And so I couldn't answer it, but that just made me feel bad. OK. And and that's what I was really struck by. Thank you for revisiting that, because it sounds like a difficult time.

0:59Skip to 0 minutes and 59 secondsSo even talking through it again can be quite hard. It did sound like what we spoke about last time, but don't let me put words into it. Please that me know if this doesn't fit for you. It sounded like you were feeling pretty low that day, and so doing less in this example was not answering the phone-- that withdrawing, shutting down, not engaging. And you describe then feeling worse. Yeah. And was the thought you mentioned last time around? "I'm useless." I did feel, yeah. I mean it does make you feel useless when you can't even answer the phone to your boss. OK. So you really noticed that. Any sense of achievement or pleasure? I feel almost silly asking.

1:43Skip to 1 minute and 43 secondsNo, just the opposite. OK. So if we could have a minus numbers on here, that would be-- OK. And the impact then on your mood? Just felt, yeah, really low. Like I just wanted to go to sleep. And I can see from the diary-- it's so helpful having this information to look at together-- that you did then do, understandably more of less, so you withdrew to bed. Yeah. Yeah. And your words were I didn't feel up to it. And expressions like that-- I didn't feel like it. I was too tired. I didn't have the energy. Really common with people experiencing depression. Can you hear yourself having said things like that? Yeah, a lot of the time I say that.

2:32Skip to 2 minutes and 32 secondsA lot of the time? Which kind of expressions? Yeah, like I don't feel-- like John will suggest something, and I'll just say oh, I don't feel like doing that today. OK. I don't feel like it. And what we call that in CBT sometimes is inside out behaviour. And what I mean by that is our internal world, so our feelings, dictate our external world. So we do according to how we feel-- inside out. Yeah. Yeah. And I'm too tired is a classic example. We just feel too tired to do. And what we're going to look at together is, you know I mentioned about reversing the cycle? We're going to look to do some outside in work.

3:21Skip to 3 minutes and 21 secondsWhat do you think that might mean?

3:25Skip to 3 minutes and 25 secondsI don't know. I guess it's the opposite of the inside out, isn't it? So doing stuff even if you don't feel like doing it. OK, What are you thinking? Which I think sounds easier than-- it's hard to do that, I think. Absolutely. And that Nike tick-- "Just do it". If it was that easy, I know that you would have done that. And so what's going to be different this time in our efforts together is that we plan in activities together, and then we see what impact it has on how you feel. And they're small activities.

4:06Skip to 4 minutes and 6 secondsThey're going to go in those blank areas where we noticed that there was an absence of activity, and they're going to be important to you. The things we plan in are going to be around your values. So not just me suggesting why don't you go for a walk? It's going to be you telling me what you value and what you can put into your week. How does that sound?

4:32Skip to 4 minutes and 32 secondsOK, yeah. Sounds tricky, I guess. OK. Let's have a look and see if we can come up an idea. What did you write is most important that day?

4:46Skip to 4 minutes and 46 secondsWhen we went to the supermarket when the kids got back from school. OK. Chose what we were going to cook for tea. And could do you more of that this week? So that one activity that you really value-- how many of those could you plan in this week? I mean, I guess I could plan what we were going to have for tea. Maybe if I wrote down what we were going to have for tea every day. OK. OK. So that's-- I really like that. It's a suggestion. I'm just-- and I don't mean to be putting up barriers, but every day sounds like a lot to me given how things are at the moment. That was a big effort.

5:29Skip to 5 minutes and 29 secondsThat was a big achievement. Can you think of maybe a more realistic or slightly easier target for us to work on? So you mean just like less days? So I'd know like half the week then, like three or four days would do it. Great. OK. So three or four days this week. If we put that suggestion into the blank diaries as to when it is that you're going to do that activity. And then we'll see how doing it affects your feelings.

The therapist has already worked with Kate to explain how withdrawing might be helping to maintain her depression. Before this session had taken place, Kate had been asked to complete an activity log of what she did in the week before this session and to rate these activities in terms of achievement, closeness (to others), enjoyment and importance. The session starts with Dr Whitney reviewing with Kate one day’s worth of activities from this completed activity log. The therapist also helps Kate to identify times during the week when she withdrew or avoided activities and to think about the impact that withdrawal or avoidance may have had on her mood. Before watching the clip, please take a look at Kate’s activity log for the day being discussed in the clip below. 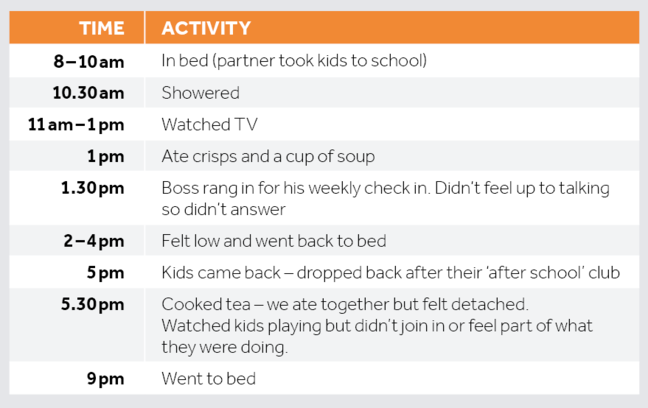 Whilst watching the video, please think about the following questions:

The therapist talks in detail about an instance during the day when Kate declined to answer a phone call from her boss. She probes further and highlights the vicious cycle whereby low mood leads to withdrawal and avoidance (not picking up the call), which leads to a further reduction in mood (feeling useless) and further withdrawal (going to bed).

The therapist also refers to how Kate is acting ‘inside out’ (ie ‘doing’ (or behaving) according to how she feels) rather than acting ‘outside in’ (ie doing things even though she may not feel like it, in order to break this vicious cycle). Once again, this clip highlights the collaborative nature of CBT – where a therapist may act as a guide but seek the expertise of their patient; when helping Kate to identify which activities could be scheduled in during the upcoming week, the therapist is keen to check with Kate which of the activities from the activity log were the most important to her. She is also keen to ensure that scheduling is realistic by checking back about the amount of days that the activity (Kate cooking for her children) should be scheduled in.

Processing and making sense of the world