This content is taken from the The University of Glasgow's online course, Antiquities Trafficking and Art Crime. Join the course to learn more.
View course
1.20 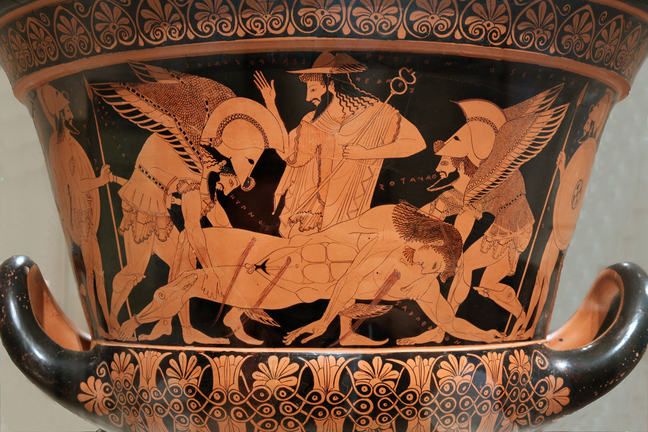 The shocking story of the Euphronios Krater.

The Euphronios (Sarpedon) krater is a large ceramic vessel (46 cm high and 55 cm in diameter) made in Athens around 515 BC. It would have been used for mixing potent wine with water. It was made by the potter Euxitheos and decorated by an artist named Euphronios, who is considered to be a master of Greek pottery painting. On the front of the vessel Euphronios chose to paint a little known scene from Homer’s Iliad: the death of Sarpedon (the son of Zeus and a mortal woman) who is carried away by Hypnos and Thanatos, the twin gods of Sleep and Death, as Hermes looks on. On the back of the pot Euphronios painted three Athenian youths preparing for battle.

Although made in Athens, pottery of this kind was often produced for the ancient Mediterranean export market. The market in central Italy Etruscan civilisation (750–264 BCE) in particular avidly sourced fine pottery from Athens that reached its ports via trade ships. Because of the thriving trade networks of this era it is often difficult to determine which modern country Athenian pottery was ultimately deposited in. Context, as usual, is key. 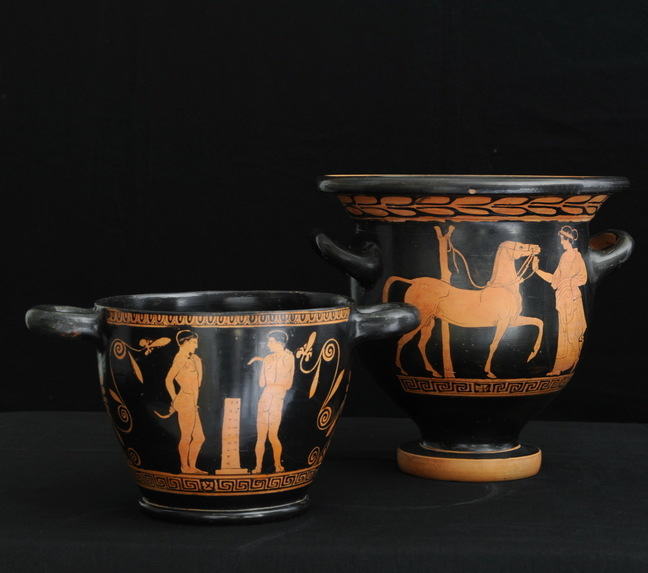 Greek pottery was very popular in Ancient Italy. These Greek pots were looted from Italian tombs, smuggled to the US, and eventually returned in 2015. By Ambasciata USA Italia, CC BY-NC-ND

The find spot and early ownership and smuggling history of the Euphronios krater have never been firmly established. However, the krater is generally believed to have been discovered in December 1971 by tomb robbers (called tombaroli in Italian), digging illegally on private land in the Greppe Sant’Angelo area of the Etruscan cemetery of Cerveteri. The tombaroli are said to have sold the krater to the now-convicted antiquities smuggler Giacomo Medici for somewhere in the region of $88,000. Medici, in turn, is thought to have arranged for the krater to be smuggled into Switzerland, where he sold it to another now-convicted antiquities dealer named Robert Hecht for $350,000. By this time, the krater was in a fragmented - though completely restorable - state. 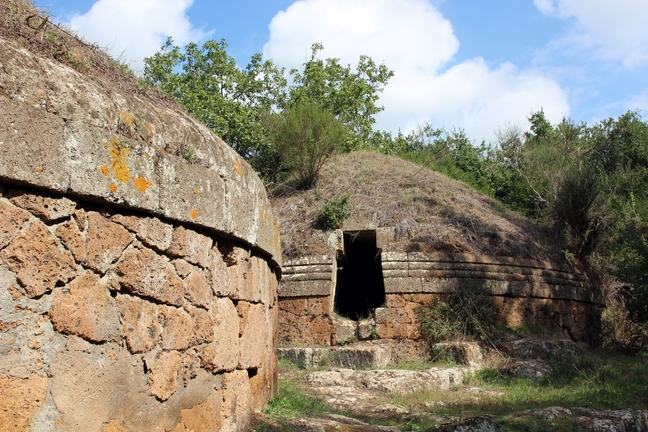 When asked by the Met how the Euphronios krater came into his possession, Hecht claimed to be acting on ten percent commission as agent for the krater’s real owner, whom he identified as Lebanese collector and dealer Dikran Sarrafian. Hecht supplied the Met with two documents that seemed to confirm his story. The first was a letter dated 10 July 1971, written by Sarrafian to Hecht, in which Sarrafian declared that he would deliver the vase to Hecht in expectation of a final sale price of $1 million. Second was another letter from Sarrafian to Hecht, dated 9 September 1972, stating that Sarrafian’s father had obtained the krater in 1920 in London and that because it was in fragments, it had been sent [to Switzerland] for restoration three years before the writing of the letter.

On 12 November 1972, the New York Times announced that the Met had purchased the krater. However, the price and ownership history of the pot were both withheld from the newspaper article, as the Metropolitan claimed it was maintaining secrecy in order to protect a potential source of future acquisitions. On 19 February 1973 a more critical account of the krater’s history was published, heralding a series of articles that questioned the museum’s claims that the pot had come from Lebanon. Instead they suggested that the krater had been excavated illegally at Cerveteri in late 1971. The names of Hecht and Sarrafian were leaked and the $1 million price tag was revealed. It was during this time that Hoving referred to the krater as the ‘hot pot’: a name that stuck. 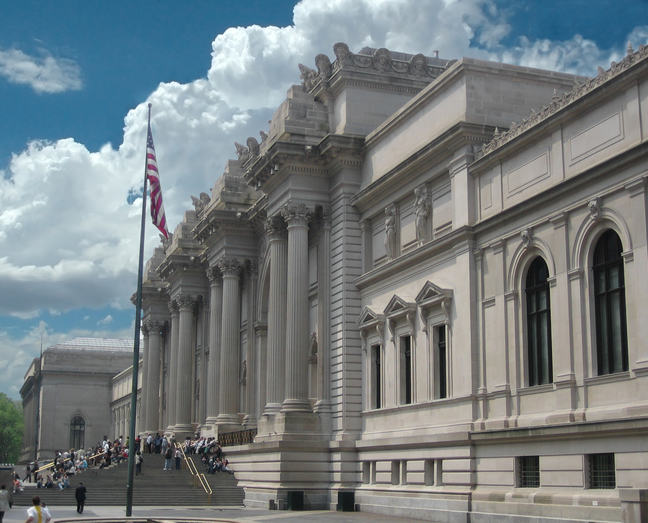 The new and potentially damaging allegations that the krater was looted and smuggled caused the Metropolitan to send lawyers to visit Sarrafian in Lebanon. They obtained documents from Sarrafian confirming that he had received a payment of $909,000 in Swiss francs for the krater on 25 October 1971. They also obtained testimony from a clerk who had seen the vessel in fragments with Sarrafian in Lebanon in the early 1960s. This evidence was made public in June 1973, and seemed to confirm that the krater was in Switzerland before the suggested December 1971 date of illegal excavation. Additionally it served to refute allegations of looting and smuggling.

Thus, by the end of 1973 the matter seemed to have been settled. Despite the rumours, the documents provided by Sarrafian in Lebanon seemed to indicate that the Euphronios krater was legitimately sold to the Met: that the pot wasn’t indeed “hot” - a slang term for stolen. In private, however, the Met’s director Thomas Hoving still harboured doubts. This was largely because, in various statements, Sarrafian had referred to the krater as being incomplete and that what he sold to Hecht was a hatbox of fragments. The krater bought by the Met, however, was complete, and was considered by Hoving to be too large, even in fragments, to have fit into a hatbox.

Hoving resigned from the Metropolitan in 1977, but by 1993 he had come to believe that there were in fact two ancient different kraters painted by Euphronios on the market: one that had been looted in Italy in 1971, smuggled, and subsequently acquired by the Metropolitan, and a second less-well-preserved one that had been in the possession of Sarrafian as claimed and documented. In order to sell the hot pot to the Met, Hecht had simply taken the documentation from Sarrafian’s fragmentary krater and attached it to the illegally-excavated and better-preserved Euphronios krater. At this point Sarrafian could not be questioned as he had died in a car crash long before.

Matters rested there until the Italian police investigations of Giacomo Medici and Robert Hecht gained momentum though the 1990s and early 2000s. Two photographs were discovered during a police raid of Medici’s Geneva antiquities storerooms: one showing Medici standing next to the Euphronios krater on display in the Metropolitan, the second showing Hecht in a similar pose (Watson and Todeschini 2007: 107). On 16 February 2001, Italian police raided Hecht’s apartment in Paris where they recovered a handwritten ‘memoir’ by Hecht on the antiquities trade. The memoir contains two conflicting accounts of the history of the Euphronios krater. In the first, Hecht admits that he bought the krater from Medici and that it had been illegally excavated in Italy in 1971. In the second, he reiterates that the krater bought by the Met came from Serrafian and was legal. 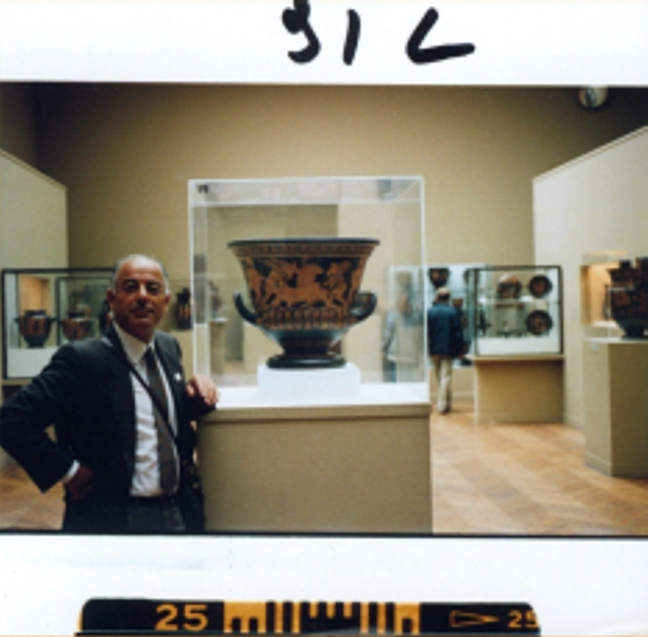 Giacomo Medici posing with the Euphronios Krater at the Met. Seized Photo 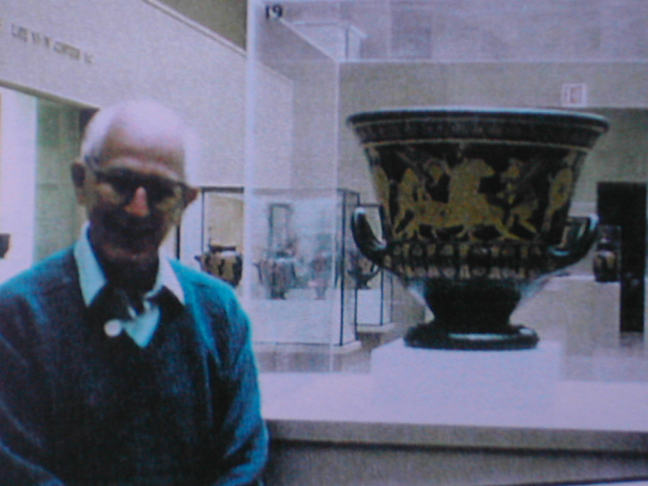 Robert Hecht posing with the Euphronios Krater at the Met. Seized Photo

Return of the Euphronios Krater

On 3 February 2006, the Metropolitan reached an agreement with Italy about the return of twenty looted antiquities. Among them was the Euphronios krater. Although the evidence for the krater’s illegal excavation and smuggling was still largely circumstantial, Philippe de Montebello, the Metropolitan’s director at that time, admitted that it was ‘highly probable’ that the vessel had been stolen from an Etruscan tomb.

The krater arrived back in Italy on 18 January 2008, where it was put on display with other returned objects at the exhibition Nostoi: Capolavori Ritrovati. It is now on view in the permanent collection of the Villa Giulia in Rome. 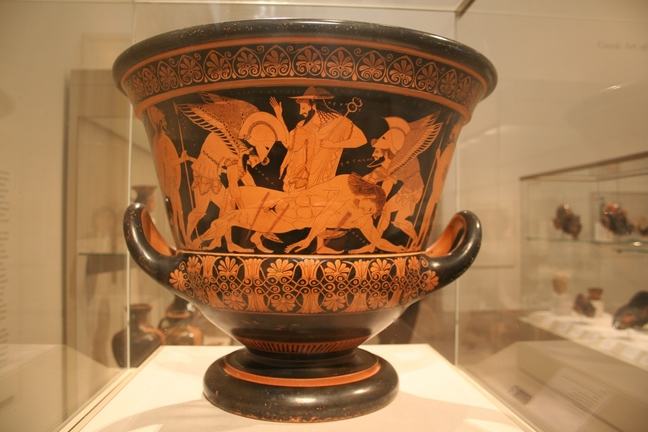 The Euphronios Krater in all its glory. by Tim Pendemon, CC BY