This content is taken from the The University of Glasgow's online course, Antiquities Trafficking and Art Crime. Join the course to learn more.
View course
3.3 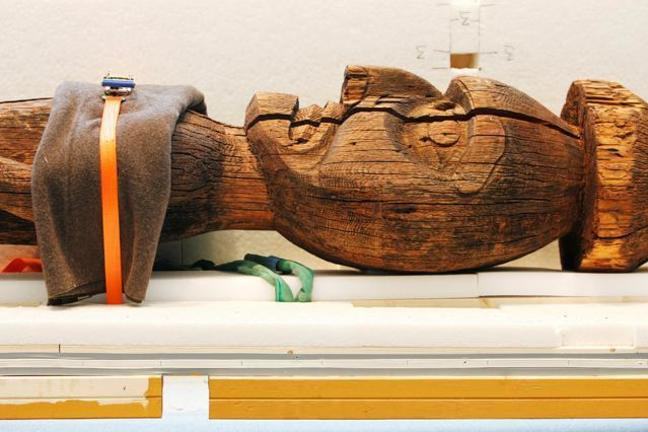 "A journey of a hundred years and thousands of miles": The G'psgolox Totem Pole

A case study of heritage theft and cultural survival.

In 1872, the leader of the Eagle Clan of the Haisla, Chief G’psgolox, set off into the woods in a state of indescribable grief. He had recently lost all of his children and many members of his Clan to smallpox, a disease introduced by Europeans. His only recourse was to speak to the spirit world. The spirit Tsooda revealed himself to Chief G’psgolox and listened to the story of loss. Tsooda then gave Chief G’psgolox a rock crystal and instructed him to call to the dead and bite the crystal. Chief G’psgolox did as he was instructed, calling the dead from the trees and his people returned as spirits. Among these spirits was the Tsooda Spirit and Zola Spirit. It was a life changing experience which gave Chief G’psgolox the power to heal.

To commemorate this interaction with the spirit world, Chief G’psgolox commissioned the carving of a totem pole. Carved by two members of the Raven clan, Humdzeed (Johnny Paul) and Wakas (Solomon Robertson), the pole is 9 meters long. Images of the spirits Tsooda and Asoalget as well as a grizzly bear adorn the pole and represent spiritual powers. It was erected in Misk’usa, a Henaksiala village, where it stood for over 50 years as a testament to a profoundly spiritual artistic tradition, and to a grieving father’s loss during drastically changing times.

The Haisla are a Canadian First Nation based out of the Kitimaat area of the North Coast of British Columbia; they have 1500 members. The modern Haisla First Nation is an amalgamation of two groups which came together in 1947: the Douglas and Devastation Channel Kitamaat (who call themselves Haisla) and the Kitlope (who call themselves Henaksiala) of the upper Princess Royal Channel and Gardner Canal.

In Haisla culture, totem poles are tied to a complex system of wealth display: part of the prestige and status system associated with the potlach. A potlach, or gift-giving feast, was the traditional way to celebrate the erection of a new pole and formed a significant element of the social and economic systems of Haisla. A flowering of totem pole carving occurred due to the initial shift in local wealth following early 19th century European contact, but carving slowed mid-century due to massive population loss from European diseases such as the one that claimed Chief G’psgolox’s children. Totem pole carving was further curtailed in 1884 when the Canadian government outlawed the potlach and, in 1894, began the mandatory removal of Indigenous children to “residential schools” preventing traditional arts from being taught to younger generations, and removing those children from their cultures and their families. 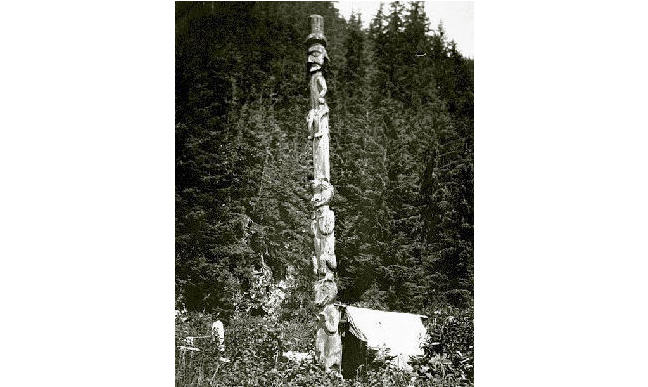 The G’psgolox Totem Pole at Kitamaat in 1921. Photo via the British Columbia Archives

Even as Canada was actively seeking to repress First Nation’s Culture, international interest was growing in the skilled sacred artwork produce by the Haisla and other Indigenous groups. People of European origins were interested in what they considered to be ethnographic curios produced by what they incorrectly called a ‘dying race’, seemingly unable to make the connection that it was the actions of Europeans that threatened the First Nation’s cultural survival. That aside, officials and consuls from various European countries, as well as the US and Canada who were posted on the western coast were tasked with collecting examples of First Nations art, particularly intricate sacred wood carvings such as masks and, of course totem poles.

In December of 1927 the Swedish vice consul to British Columbia, Olof Hansson, began the process of bagging the G’psgolox totem pole for Sweden’s Museum of Ethnography. Hansson was on the lookout for high quality examples of Haisla carving and was notified about the location of the pole. The vice consul contacted the Canadian Department of Indian Affairs to ask for the pole on behalf of Sweden. They granted his request a month later, stating that because the location where the pole stood was “uninhabited”, the totem pole could be transported to Sweden provided that Hansson could convince the Haisla to part with it.

Both researchers and the modern Haisla have challenged the assertion that the site was abandoned, rather that both Sweden and Canada misunderstood or wilfully ignored Indigenous seasonal living patterns. The Haisla moved through a series of locations throughout the year due to food availability and it is likely for that reason that they were not in Misk’usa when Hansson requested the pole. This is confirmed by reports that the Haisla discovered the pole was missing when they returned to Misk’usa to fish shortly after it was taken.

The stipulation from the Canadian government that Hansson obtain permission from the pole’s owners before removal is a matter of controversy. Hansson claimed in the contemporary Swedish press that although he was able to convince younger Haisla to sell him the totem pole, older Haisla had resisted. Representatives of the Museum of Ethnography have claimed that the sale of the pole was properly negotiated, however they have no receipt for the purchase nor do they have any record of the terms of the sale, only a Canadian export license. Louisa Smith, the great-great grand daughter of Chief G’psgolox, maintains that the pole was taken without the permission of her family.

All of this put the removal of the pole in a precarious legal position. Although the ability of the Canadian Department of Indian Affairs to determine that the pole could even be removed in the first place is ethically questionable, if Hansson did not obtain proper permission from the pole’s rightful owners to remove the piece, his export license would have been obtained based on a false declaration and could, potentially, be challenged in court.

But, perhaps more importantly, this is an example of Indigenous people being forced into a European model of property, ownership, commodification, and sale. The pole belonged to the Haisla collectively and it was made to serve a function within an economic system that, though valid and complete, was not comparable to Europe’s. An individual Haisla could not make the decision to sell the pole in the European sense as it was not theirs to sell. Yet, as often happens in colonial and conquest situations, the dominant power prevailed and the G’psgolox was sent to Sweden.

For over 60 years the Haisla did not know the location of the totem pole, however its memory was preserved via oral traditions. It wasn’t until 1991 that they located the pole at the Museum of Ethnography in Sweden, with several Haisla community members confirming its original location and identification. Part of the reason for this delayed location of the pole is that the museum had kept the piece in storage for 50 years, not displaying it to the public until 1980. The museum had not been in communication with the Haisla about the pole during that entire time span.

In December 1991, with logistical help from Greenpeace, several Haisla visited Stockholm not to ask if the pole would be returned, but when. The next year a representative of the museum visited the Haisla. The Haisla told the representative that they believed the museum (but not Hansson) acquired the pole in good faith, but that it was stolen and need to be returned. They offered to make a replica of the pole for Sweden.

In 1994 official government permission was granted for Sweden to “gift” the pole to the Haisla. The implications of this wording, however, caused serious issues, with the Haisla maintaining that you cannot gift someone their own stolen property. Furthermore, a newly made replacement totem pole had become a requirement of the return. The Haisla noted that that would not be a true gift if they were required to pay for it with a replacement pole.

Negotiations continued and a group of Haisla traveled to Sweden again in 1997 to continue to press their claim and to challenge the museum’s continued resistance to return. The Haisla were told that the museum was hesitating to return the totem pole because they wanted the piece to be preserved in a climate controlled environment, the implication being that they did not trust the Haisla to care for the totem pole properly. The Haisla had planned to display the totem pole outside in accordance with their traditions and beliefs, with the expectation that it would eventually return to the earth. They felt that creating an indoor arrangement for the totem pole was financially impossible, having been given no money to display the pole by either the Swedish or Canadian governments, and that it was a challenge to their traditional cultural practices. The museum eventually stepped down from this stipulation, although the Haisla decided to raise money to create an indoor display.

In 2000 Henry Robertson, the grandson of one of the original pole carvers, made two replica poles, one of which was sent to Sweden in a partially complete state. He then spent a month completing the pole in the museum so that visitors could see the carving process. At this point, the Haisla had not been able to raise the money needed to build an indoor facility for the real pole which remained in Sweden. 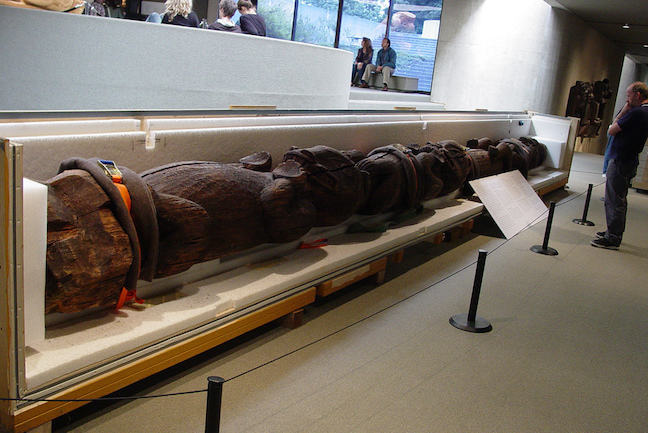 The G’psgolox Totem Pole on display in Vancouver in 2006, a stopover before returning to Kitimaat. Photo by Bob Keefer via Flickr

In 2006 the Haisla conducted a traditional pole raising ceremony for the replica pole at the Museum of Ethnography and on 23 March the original pole was packed and shipped back to Canada. On 1 July it returned to Kitimaat Village and is thought to be the first First Nations totem pole repatriated from Europe.

“The repatriation of the G’psgolox totem pole has been a journey of a hundred years and thousands of miles” said Louisa Smith, Haisla spokesperson for Chief G’psgolox. “It has become a catalyst for cultural revival and renewal. In celebration of its return, Chief G’psgolox has presented this pole to the Haisla community for safe keeping. Our children and future generations will be able to see, touch and feel a piece of their history, reclaimed by a nation against all odds.” 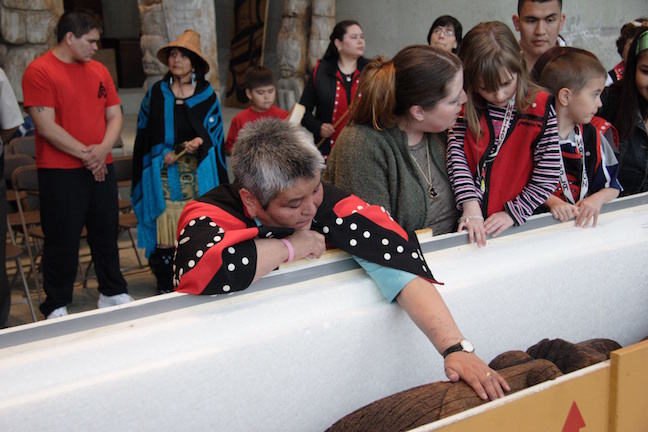