This content is taken from the The University of Glasgow's online course, Antiquities Trafficking and Art Crime. Join the course to learn more.
View course
2.5 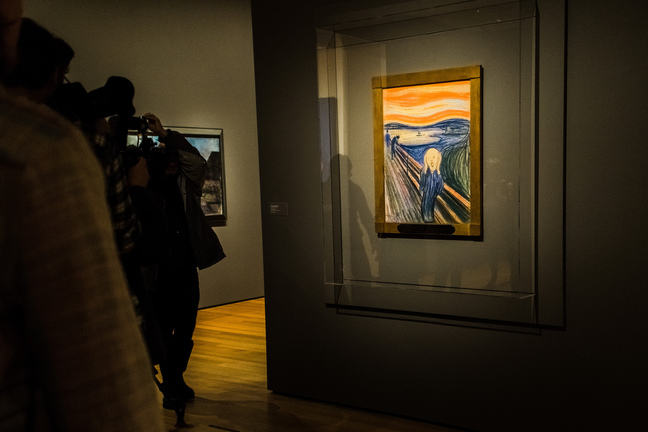 “Thanks for the poor security.”

In the lead up to the 1994 Olympic games, Norway’s National Museum moved their version of The Scream (#2) from its usual location to a ground floor gallery as part of a showcase of Norwegian culture. In hindsight, this was interpreted as a controversial move. Many consider the ground floor of museums to be the hardest to secure: ground floors are certainly the busiest, they are nearest to exits, and their windows are within reach. That said, the Gallery considered their security cameras and alarm system to be sufficient to protect their national treasures. Unfortunately they were mistaken.

At 6:30 am on 12 Feb 1994, the same day as the opening ceremony of the Olympics, the museum’s alarm went off. The alarm immediately alerted a guard who called the police. Although the police arrived at the gallery in minutes, they were too late. Security camera footage showed two men climbing a ladder, smashing a gallery window, cutting The Scream off the wall with wire cutters, and fleeing with the painting. The heist took a mere 50 seconds total. 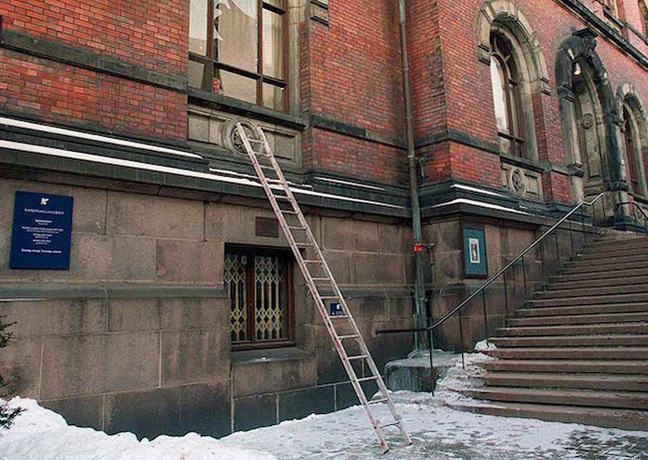 It took less than a minute for the thieves to climb this ladder, break the window, steal The Scream, and escape

The thieves left a postcard behind in the gallery. It said “Thanks for the poor security.”

Only hours later, the museum’s director Knut Berg addressed the press stating that The Scream was “Norway’s most valuable, Munch’s most renowned, and it would be impossible to sell.” Indeed, despite the way art heists are portrayed in film, experts know that stolen paintings are nearly unsalable. A legitimate, legal version of The Scream would go for tens of millions on the art market, but a stolen version is nearly worthless: more trouble than it is worth. Everyone knows that The Scream belongs to Norway’s National Gallery and everyone knew it was stolen. Who’d buy it?

Because there is no resale market for a stolen The Scream and because the theft occurred seemingly in conjunction with the Olympics, many speculated that the theft was some sort of publicity stunt. A radical anti-abortion group claimed responsibility for the theft but they were dismissed by the police as attention seekers.

One month after the theft, the National Gallery received what amounted to a ransom letter. The thieves demanded $1 million for the return of the painting. The Gallery refused to pay and, instead, turned to Scotland Yard’s Arts and Antiques squad for help. The British Police developed a sting operation. Two undercover officers offered to buy the painting for $250,000 USD and the thieves went for it. Note the drop in price: a legitimate The Scream sells for $120 million at auction; the thieves demanded a $1 million ransom from the museum; the thieves are willing to accept $250,000 from a potential buyer. The painting was recovered in a hotel in the beach resort of Åsgårdstrand. It seems fitting that The Scream would be found there: Munch once owned a cottage in Åsgårdstrand and painted many of his famous works there. 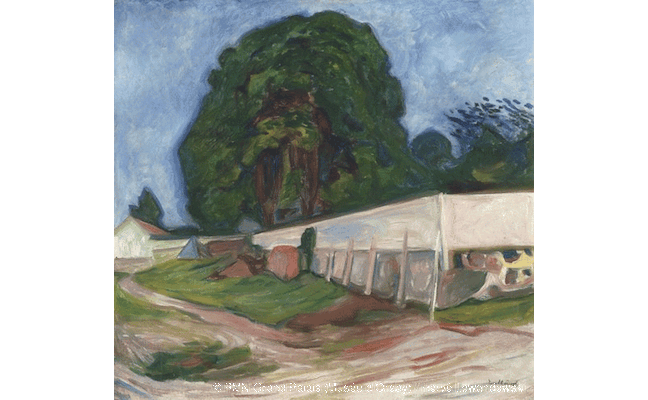 Summer Night at Åsgårdstrand (1904) painted by Edvard Munch. The Scream was recovered in the beach resort of Åsgårdstrand

Four men were arrested and convicted of theft and attempting to sell stolen property. The gang was led by Pål Enger, who was sentenced to 6 years and three months in prison. Enger was no stranger to art theft: he had already spent four years in prison in the late 1980s for the theft of another Munch artwork, The Vampire. However, in an unfortunate twist, the convictions of three of the four thieves were overturned on a technicality. The undercover detectives had entered Norway using false identities, which was a violation of Norwegian law.

After his release, Enger legitimately purchased a Munch lithograph at an auction in 2001.