This content is taken from the Coventry University & Institute of Coding's online course, Artificial Intelligence: Distinguishing Between Fact and Fiction. Join the course to learn more.
View course
2.9

0:12Skip to 0 minutes and 12 seconds Well I’ve had two chips, the first one erm was just an RFID, radio frequency identification device that was put in my upper arm and that identified me to the computer in my building and we got it to track me as I was moving around, this is a building at Reading University where I was at the time and as I moved around it knew where I was at different points so it opened doors and switched on lights and said hello and it was great fun. I did it partly, I was the first human to have one of those chips so there was a technological experiment as to how well it would work and so on and so forth.

0:54Skip to 0 minutes and 54 seconds Interestingly, it was positioned in my left arm because we really weren’t sure how well it would work. Essentially there are big coils of wire in the door frame and in the implant it doesn’t have a battery, half of it is just a coil of wire and that’s how it gets its power so its just like a transformer and as you walk through the doorways current in the coils in the door frame is induced in the coil which then uses the coil as an antenna which transmits the signal back to the coil and there we go like that.

1:26Skip to 1 minute and 26 seconds But we weren’t sure if I walked through how well it would work and I might have to hold my arm like that as I was walking at a funny angle. So, it was in my arm so that I could move around and hope people didn’t think why are you walking with your arm at that funny angle but it’s interesting now that people that follow tend to put the implant in their arm or their wrist and it doesn’t have to it could be in their bottom, it could be in their neck, it could be just about anywhere in the body but they put it in their arm.

1:56Skip to 1 minute and 56 seconds There’s even James Bond in Casino Royale it goes into his arm, yeah there we go so its just a comment. I know, yeah I mean why not try it, no harm, its good fun but you need a system to operate it in. Just having that RFID implant, it doesn’t actually do anything unless you have got an interacting system to get thigs, monitor you and so on. The second implant that I had is now called the brain gate. What it consisted of was 100 small spikes and that was fired into the nervous system in my left arm. So, the surgeons, this was an operation at the Radcliffe in Oxford.

2:45Skip to 2 minutes and 45 seconds Surgeons had to open up my arm, locate my nervous system and then fire this thing, they actually cut away something called the myelin sheath it was like a covering around the nervous system, they had to cut away some of that and then fire the implant in there and then I had wires running up my arm coming out here and literally we could plug me into the computer and onto the internet or a wireless link and that was great for experiments so the main experiments I did were one of them was I went to New York and linked to a robot hand in Reading where I was at the time.

4:49Skip to 4 minutes and 49 seconds The third thing I did was having ultrasonic input so my brain was receiving pulses that meant the closer an object came to me so the more pulses my brain was getting. So, it was like a ding, ding, ding, ding, something’s coming up close, ding, ding, ding something’s further away. Obviously very useful to help somebody whose blind but incredible fun for me experimenting with a different sensory input.

In the video above, Coventry University emeritus professor Kevin Warwick talks about his motivation behind and experience of becoming the world’ s first cyborg. This video covers one of the main themes of this step and we’ll return to him later.

Research and development in artificial intelligence (AI), in addition to applying machine intelligence to the games that humans play, is increasingly focusing on the design of prosthetics (artificial limbs) and medical enhancements.

For people who have lost one or more of their own limbs through illness or injury, a prosthetic (artificial replacement) hand or leg affords movement that would make life difficult for them to be without. 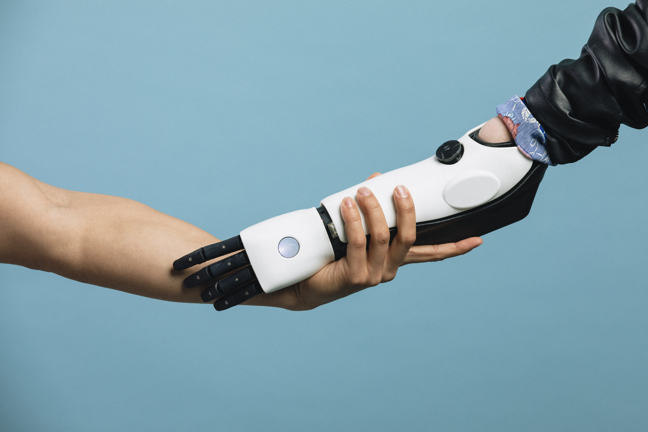 Furthermore, exoskeletons or robot-body-suits can allow standing and mobility for patients who have suffered paralysis and individuals who are wheelchair-bound. The following link takes you to a specific recent example where a man in France regained some of his mobility through exoskeleton technology Agence France Presse (2019) ‘Paralysed Man Walks Using Mind-Controlled Exoskeleton’. 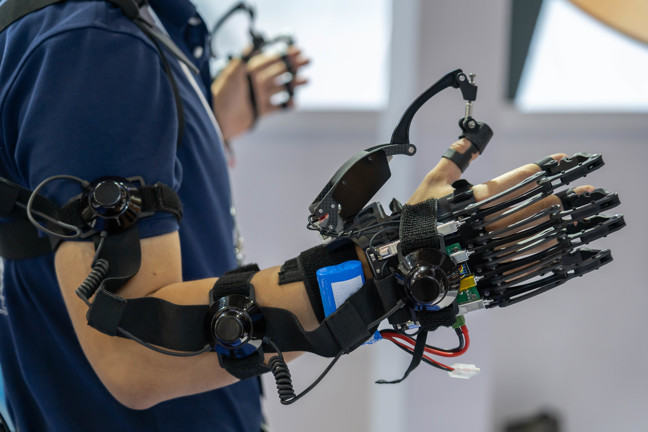 The key challenge for AI in providing better mobility for some humans affected by injury or illness is for the material of the prosthetic to be engineered lighter and more ‘intelligent’. Smart materials that can react to and change according to the environment could ensure individuals wearing an exoskeleton or possessing an artificial limb have flexible, pain-free movement and high quality of life.

In addition to external body parts, invasive medical treatments or the possibility for medical enhancements have caught the attention of AI researchers. One application is deep brain stimulation using artificial intelligence in the treatment of Parkinson’s disease (Warwick and Shah 2013). Deep brain stimulation research involves creating an ‘intelligent warning stimulator’ that predicts the onset of body tremors in patients suffering from Parkinson’s Disease, which stops the locking of muscles.

The power of an AI system can be employed to accurately model-specific features of the human brain, even features that the person themselves is not at all aware of. In this way, by monitoring the brain in real-time, an AI system can alter the brain’s performance in many different ways, increasing its capabilities. (Warwick and Shah 2013: 167).

Where capabilities diminish due to age or disease, for example in dementia, AI technologies might provide a solution to restoring memory or preventing memory loss in the future. But what about human enhancement to boost intelligence giving an edge over others?

Discuss the morality of developing:

The website for the Centre for Nanotechnology and Smart Materials: CeNTI may help.

Warwick, K. and Shah, H. (2013) ‘Selective Deep Brain Stimulation Through the Use of AI’ in ed by Lucivero, F. and Vedder, A. Beyond Therapy vs Enhancement? Multidisciplinary Analyses of a Heated Debate Pisa: Pisa University Press