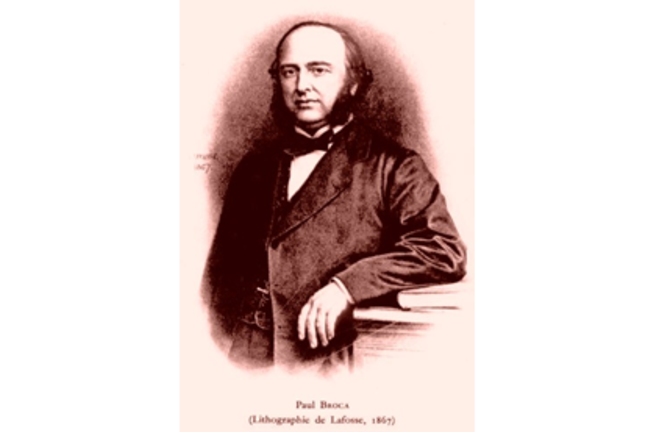 The researchers behind the classical language areas - Broca

Paul Broca (1824-1880) was the head of the surgery department of the Bicêtre Hospital in Paris and secretary of the Association for Anthropology when he saw Mr. Leborgne, who he was supposed to operate on his leg. Mr. Leborgne was known in the hospital as Mr. Tan, because the only word he produced was ‘tan’, together with ‘sacré nom de Dieu ’ (“holy name of God”).

After Mr. Leborgne passed away (April 17th, 1861), Paul Broca did a post mortem examination and he concluded that a lesion in the posterior part of the third and possibility the second frontal gyrus in the left hemisphere, that was as big as a chicken’s egg, caused the speech problems. A second patient, Mr. Lelong, with similar speech problems had a similar lesion.

Although Paul Broca was still cautious, the dogma of the third frontal gyrus was born. It was only after many more cases that Broca personally examined that he reported that the lesion was in the left hemisphere in all patients, but, being a good scientist, he also said that conclusions could only been drawn when a similar lesion in the right hemisphere would not cause speech problems. Several of these cases were presented to him and on June 15th, 1865, Paul Broca stated that the left third frontal gyrus is the seat of articulated language. According to him, a lesion in this area results in serious speech problems and this is related to the fact that the majority of people is right-handed. He called this ‘afémie ’.

The left inferior frontal gyrus (IFG) is nowadays called ‘Broca’s area’. Broca’s aphasia is characterized by a grammatical disorder, with or without articulation disorder. Notice that this is not the speech problem that Paul Broca described, although Broca’s area is often affected in Broca’s aphasia.

Paul Broca must have been aware of the importance of his work. He examined the brains but kept them intact. The brains of Mr. Leborgne, Mr. Lelong and of many other patients are being kept in the anatomical museum Dupuytren in Paris. Even now, 150 years later, Leborgne’s brain is very intriguing for aphasia researchers, as shown by the studies of Signoret et al. who made CT scans and Dronkers et al. who made MRI scans of the brain of Leborgne.