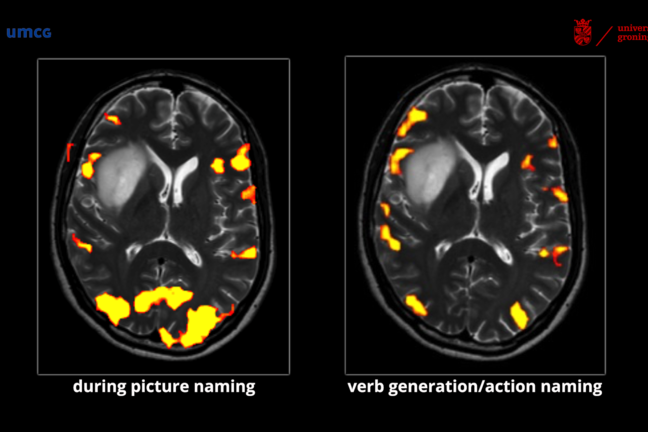 Earlier, we spoke about the language network. The old idea that there is ‘just’ Wernicke’s area, Broca’s area and the connection via the arcuate fasciculus (which already is a network!) is too simple, no matter how advanced it was when it was first described by Wernicke.

When Wernicke and Lichtheim decided to include reading and writing in their model, the network became pretty advanced and it resembles the modern networks quite well. Of course, we learned a lot during the last 150 years, both from lesion studies and from awake brain surgery. One of these things is that naming pictures of objects and repetition are not the perfect tasks to discover and describe the language network. Language is so much more than repetition and nouns of objects and animals: we speak in sentences and for that, much more is needed: verbs, syntactic structure, morphological inflection, function words like articles and pronouns to name a few things. Also, for reading and writing there are operations that were not noticed when Wernicke and Lichtheim developed their models. Here, we have different word classes as well, but also notions such as irregularity of spelling (like the words ‘yacht’ and ‘pint’ in English, which are unpredictable English words not based on regular spelling), word frequency et cetera.

For some functions we roughly know which areas are important. However, considering that we only know that there is a language network, but we do not know where exactly it is positioned, it is very hard to decide which task to use for testing which cortical area during awake brain surgery. Apart from that, brain tumours infiltrate in cortical and subcortical tissue and the language functions may shift to other locations thanks to brain plasticity. So, ideally, all language functions should be tested during resection in or around the language network.

This is not as difficult as it seems, because testing at the sentence level involves grammar, lexicon, sound level, articulation and the relation between these levels. Unfortunately, right now that is not possible, because we are bound to the 4 seconds that direct electrical stimulation may last and making a sentence to a pictural stimulus does not allow for this. Also, testing writing is difficult during surgery, since a patient with a tumour in the left hemisphere (that may cause language problems) is usually right-handed and is lying on his or her right side. So, we are restricted in what we can do. However, we are convinced that quite some information can be gained when linguistically sophisticated tasks are used.

Although we do not know the exact locations yet, it is important to test for specific functions in specific areas. For example, we know that posterior areas and specifically the angular gyrus are important for reading (and writing). So testing reading is important when the tumour is located in or around this area. Articulation is mediated by the motor cortex and Broca’s area, so if the tumour is here, a simple articulation test may be useful. When the tumour infiltrated in the subcortical tracts, the arcuate fasciculus and the Inferior Fronto-Occipital Fasciculus are particularly vulnerable. The function of the first one can be tested by a simple repetition task, of the latter by using task that test semantic processing, for example a multiple choice task: which word or picture does not belong in this series: cat – rose – dog.

Things get more complicated when word finding is involved, but an object naming test can be used when the tumour is in the perisylvian region. Grammar is, of course, even more complex. There is no way how we can test that extensively during surgery, but action naming is until now the best we can do. When the patient has to use an inflected verb (see figure 1), there is some grammar involved: the verb is needed to build a sentence and has to be inflected. Right now, this is as far as we can go in 4 seconds. 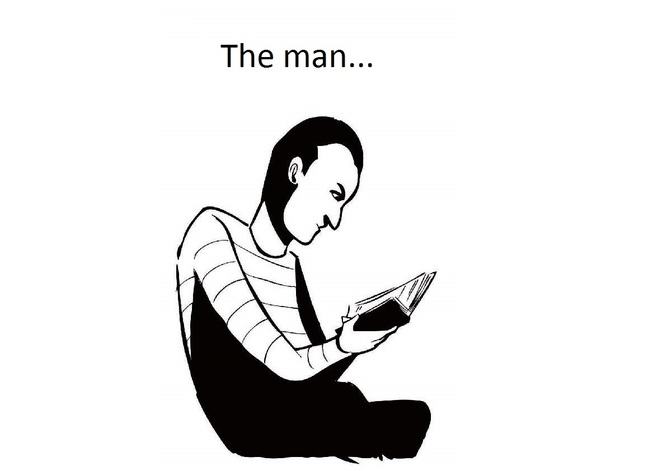 Figure 1: Example of the verb retrieval test: the patient should read the phrase above the picture and complete is by using a verb that is inflected (‘the man reads’)

From documentation of the results of language testing during awake brain surgery and neuro imaging studies using fMRI and nTMS (explained in the upcoming weeks) , we can derive a kind of rough map of what to test in which area. We hope that in the future nTMS will guide us in language mapping before surgery, at least for the cortical areas.