Where was it found?

The large open space of Palace Green was once occupied by houses. It was probably the market place of the early settlement of Durham. All this was swept away by Ranulph Flambard, Prince Bishop of Durham between 1099 and 1128, so that, as one chronicler put it, ‘the church should neither be endangered by fire nor polluted by filth’. The effect of Flambard’s work was to create a grand ‘Place’ (the name was later corrupted to ‘Palace’) between the Bishop’s Castle and the Cathedral, and this has remained a dramatic open space ever since. 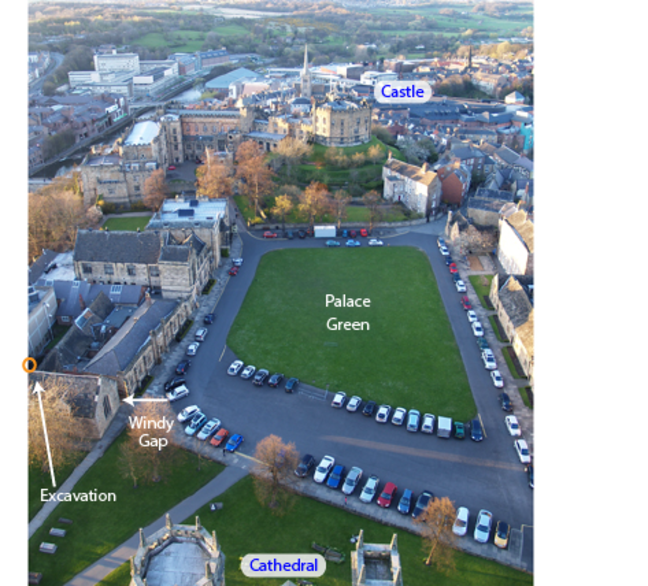 Bishop Flambard also built the first defensive walls around the medieval city. The Castle and Cathedral, Palace Green and all of its surrounding buildings lay within the greater Castle grounds which covered an area of about 11.3 hectares or 28 acres. The walls, which followed the top of the slope rising up from the river banks, could be entered through several gates. To the west of the Cathedral was a small gate or ‘postern’ still known as ‘the Dark Entry’ and to the north there was another called ‘Windishole Gate’, very probably at Windy Gap, the narrow alleyway which runs immediately to the south of the excavation site. You can pick this out on the photograph above. Importantly for our story, this alleyway defines the boundary between the Cathedral and the Castle. 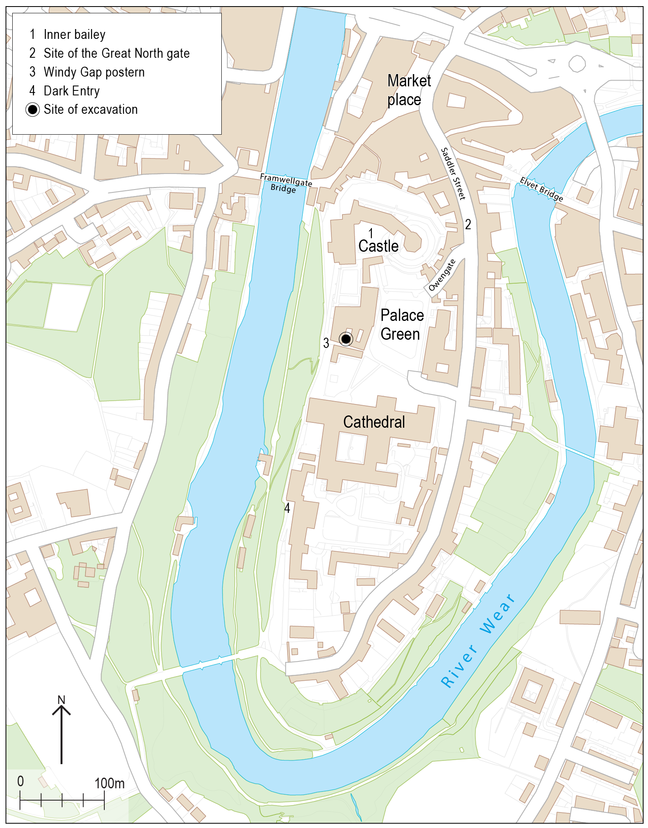 Centre of Durham, showing the location of the discovery. Drawn by Alejandra Gutiérrez; base map © Crown copyright and database rights 2019 Ordnance Survey (100025252).

The later arrangement of buildings around the findspot can be explored in detail on historic maps. These sources help to chart the changing topography of Palace Green.

Of particular importance is the plan made by Thomas Forster in 1754 (below) which shows the outlines of buildings such as the Bishop’s Exchequer (to the left of number 75 on Forster’s plan) which has stood outside the Castle’s outer gate since the 1440s. 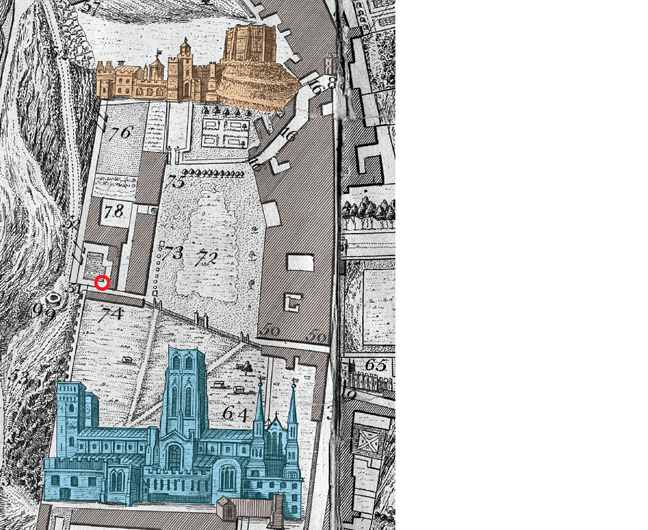 Extract from Thomas Forster’s 1754 map of Durham, showing: the Castle at the top (north), the Cathedral at the bottom (south), the zigzag block of stable buildings used by the Bishop and his household, and the garden to the west of the site of the burials (red circle) © Durham University Library: reference DUL NSR Planfile C 19/1.

The medieval Castle wall ran to the west of the present Fellows’ Garden (number 76) and down the west side of the excavation area. Forster’s map also depicts the courtyard (number 78) in front of the Bishop’s stables which had evidently been constructed by the mid-18th century. The stable immediately east of the excavation site is the South Stable. The building to the west (left here) of the number 73 was the Registry for the diocese. You can just make out a line of little squares along the pavement outside which is where the columns for its porticoed frontage once stood. These buildings and structures, and their appearance on this map, were later to provide crucial clues to dating the human remains.

From the 1754 map it can be deduced that the burials discovered in November 2013 were dug in a marginal area which was enclosed but not very much overlooked. Clearly, the discovery was not made in the Cathedral graveyard but within the former grounds of Durham Castle, and about as far from the main residential buildings as it is possible to get.