One local tradition in Durham tells that Scottish soldiers who were taken prisoner at the Battle of Dunbar in Scotland in 1650 were buried under a mound on the west side of the Cathedral cemetery (see 1 on the map below). In fact, this mound was originally created in 1830 as a viewing terrace.

Other burials have also attracted attention over the years. A skull with a suggestive gash ‘as if struck by a sword or an axe’ was found in the 1920s immediately west of the Old Grammar School on the north side of the Cathedral (number 2 on the map below) and a mass grave is said to have been seen in the same area in 1946 or 1949 (3 on the map below). In fact it is more likely that this was a charnel deposit (a place where disturbed bones were placed when new graves were dug), but the detail is rather hazy. To test the hypothesis that mass graves might lie in the Cathedral graveyard, geophysical prospection was undertaken in 2016 to map any hidden deposits under the ground. The results were negative. All other human remains found on the south side of the Old Grammar School are likely to be medieval burials from the Cathedral graveyard disturbed during construction work. 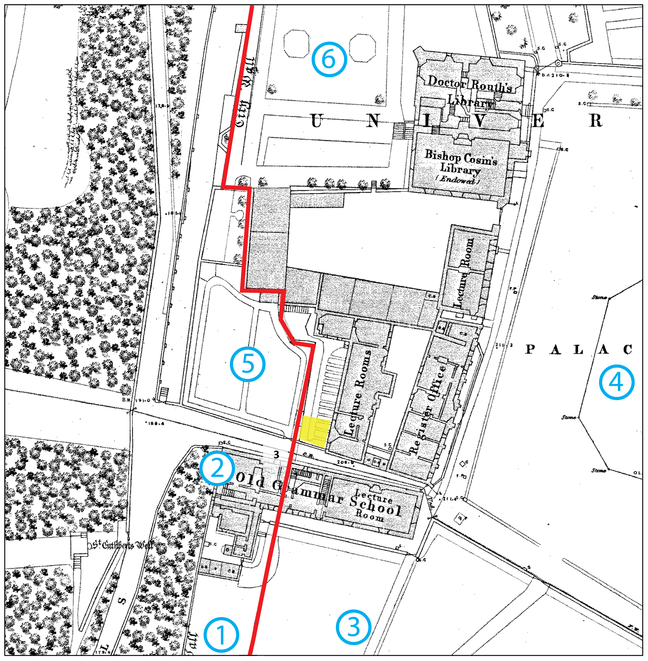 Location of archaeological features and finds around the excavation site on the 1857 Ordnance Survey plan of Durham City. The red line shows the most likely line of the medieval castle wall; the yellow square is the burial site. Base map © Crown Copyright and Landmark Information Group Limited (2019). All rights reserved. (1857).

More surprising perhaps is that recent excavation and recording work in and around the buildings of Palace Green Library had not previously exposed human remains; for example, channels dug under the ground to carry services (e.g. electricity) for buildings to the east and north had never revealed anything of consequence. As we now understand it, this is because those trenches were too shallow. Absence of evidence in this case is not evidence of absence; human remains may well lie at a greater depth.

What can be stated with certainty is that the burials do not extend as far as the lawn in the centre of Palace Green (4 on the map above). Geophysical survey there in 2009 produced no suggestive evidence, nor were any burials observed during excavations undertaken there in 1966. Therefore, on the eastern side of the excavation, the limits of the possible area of further burials can be drawn with reasonable confidence. Turning to the area immediately to the west of the excavation site, no burials were reported during the construction of the Pace Building in the 1960s (5 on the map above). Likewise, burials are not to be found today in the Fellows’ Garden north of the West Stable (6 on the map above); geophysical survey produced no indications of burials either here or in the Master’s Garden further to the east. Excavations near the Castle in 1991, while they did define the alignment of the former medieval moat, did not produce any burials. The moat was infilled and levelled during the later 17th century.

Putting these fragments of evidence together, both positive and negative, the area where there may be remaining burials can be delineated quite tightly. Today, the most likely location for further mass graves is directly beneath the South Stable marked as ‘Lecture Rooms’ to the east of the discovery site and under the small yard to its east, the new café, and the buildings to the north.

Why do you think mass graves were not discovered before 2013? Share your thoughts in the Comments section below.