This content is taken from the Durham University's online course, Archaeology and the Battle of Dunbar 1650: From the Scottish Battlefield to the New World. Join the course to learn more.
View course
2.3

Several of the individuals from Palace Green had experienced poor health during childhood and this was marked out on their bones and teeth. 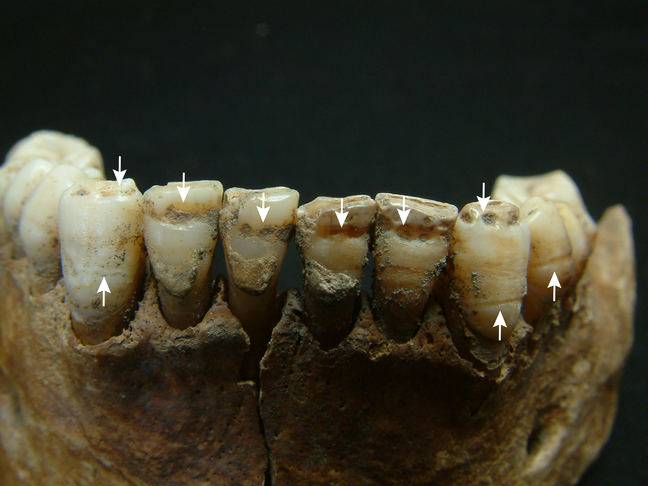 If a child experiences malnutrition or disease (‘stress’) this can disrupt the formation and development of the teeth and leave permanent lines, grooves or pits in their tooth enamel. Known as dental enamel hypoplasia, this condition was particularly prevalent and some individuals had suffered repeated episodes. At least one person had experienced stress during very early infancy, which may well be a sign that the mother’s health was also poor.

Around one third of the individuals had had rickets during childhood, which is an unusually high proportion. This bowed appearance of the long bones of the arms and legs is caused by a lack of vitamin D in childhood and is usually linked to a lack of exposure to sunlight. In archaeological contexts, rickets is more frequent in recent urban populations with a high rate of poverty and malnutrition, especially industrialised environments subject to air pollution. A heavy cereal-based diet can also interfere with the absorption of calcium, which is essential for normal growth.

A third of the individuals had evidence for non-specific infections (those for which we cannot specify the offending organism, like bacteria) or experienced alternative causes for the inflammation of their bones. This condition was active in five adolescents at the time of their death and four had suffered on previous occasions. This may be because they had scurvy, as a result of a diet which was restricted in fresh fruits and vegetables in the last weeks or months of their lives.

Three-quarters of the men had developed maxillary sinusitis, a sign of inflammation in two of the sinuses (air-filled cavities) of the face. This was probably caused by exposure to polluted air. The smoking of tobacco could have contributed to this condition but the daily occupations of the men, for example working in saltworks, or their exposure to open fires inside poorly ventilated homes, might have been risk factors too. 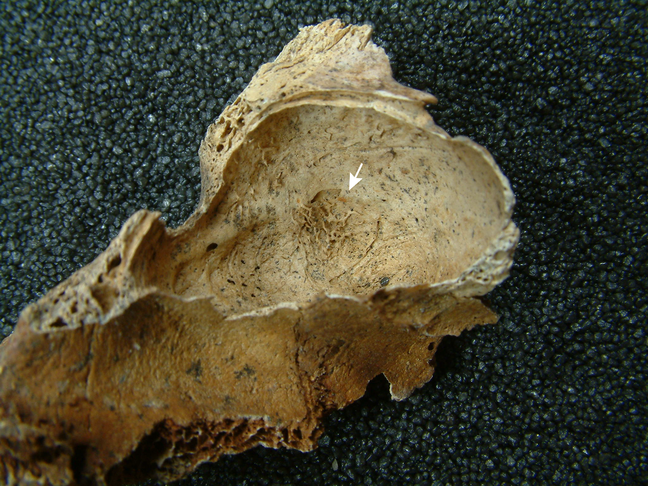 The fine cobweb of lamellar bone strands (see arrow) in the right maxillary sinus of Skeleton 27A indicates that he suffered from sinusitis © Anwen Caffell, Durham University

The most health-damaging particles are very tiny (10 microns or less in diameter), and can penetrate deep inside our lungs. The main health problems associated with air pollution are respiratory diseases, some of which can give rise to heart disease, but pollution can also lead to vitamin D deficiency, cancer, and birth defects. Clearly, air pollution is not a recent problem – it has had a long history. Looking back into the archaeological record for its effects on our ancestors’ bones provides the deep-time perspective to understanding the problem today. Have we learnt any lessons? By 2050, more than 70% of the world’s population will live in cities, and we will all need to come together and help to mitigate air pollution, for the sake of our world’s health.