This content is taken from the Durham University's online course, Archaeology and the Battle of Dunbar 1650: From the Scottish Battlefield to the New World. Join the course to learn more.
View course
2.9

The enamel of our teeth forms during childhood. Unlike bone, however, it is a dead tissue without a blood supply and neither renewed or repaired. Its isotopic composition is influenced by diet and environment over the years that it took to form.

Histories of the dietary life of 12 of the excavated individuals were created by taking small sequential samples of dentine from the entire length of a canine and a third molar (wisdom tooth). This method was developed by Julia Beaumont and her colleagues at the University of Bradford (UK). The study on the Palace Green remains was carried out by Janet Montgomery and Julia Beaumont.

By measuring the ratio between the isotopes of the carbon and nitrogen in each of these samples it is possible to investigate the consumption of dietary protein. When the samples are then combined together in chronological order, they provide information covering the period from the first year of life to approximately 23 years of age, as shown in the graphic below: 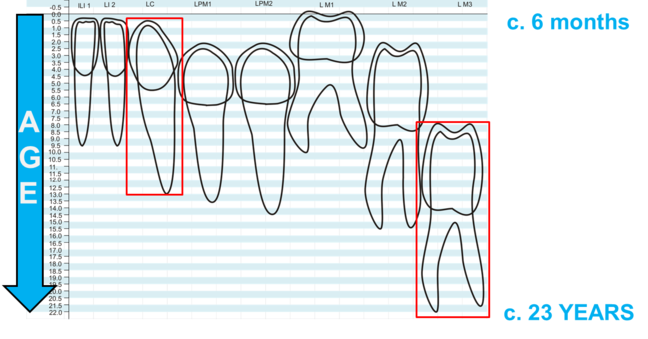 The development of the permanent lower dentition against age; the permanent canine and third molar teeth are outlined in red © Julia Beaumont and Janet Montgomery

The isotopic profile of an individual can show how protein source and intake, and physiological or nutritional stress, varies from infancy through to adulthood. Dietary milestones such as breast-feeding and weaning, or shifts in diet from terrestrial to marine foods, can all be identified. It is also possible to say whether an individual has had a relatively consistent diet and a stable physiological status with no major illnesses or injuries.

In fact, almost all of the 12 men appear to have been breast-fed in infancy, with weaning underway by nine months of age; this registers as a drop in the profiles of both carbon and nitrogen in early life. The oldest individual analysed (see below) was a mature adult man. His teeth suggest that, after he was weaned in his first year of life, he consumed a consistent diet of mixed terrestrial animal and plant proteins and suffered no major physiological problems up to 23 years of age. He seems to have been sufficiently nourished and remained in reasonable health throughout this part of his life. However, his profile is in stark contrast to the other 11 profiles. All of the others show evidence for considerable changes in diet or periods of severe dietary or health stress. 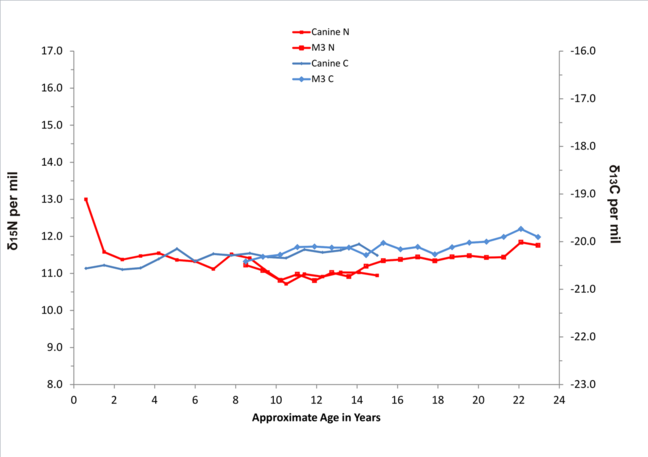 Skeleton (Sk) 12 (see below) for example showed a clear breast-feeding signal (falling nitrogen and carbon) and, towards the end of his life, rising nitrogen isotopes combined with falling carbon isotopes. This implies a period of nutritional or health stress in his last months. 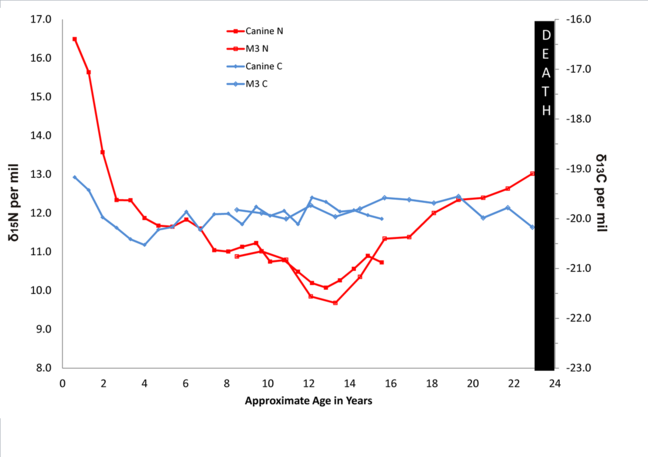 Sk 23 seems to have undergone significant health problems during infancy (falling nitrogen and rising carbon). He also had severe enamel defects dating back to infancy, as well as evidence for (healed) childhood rickets. 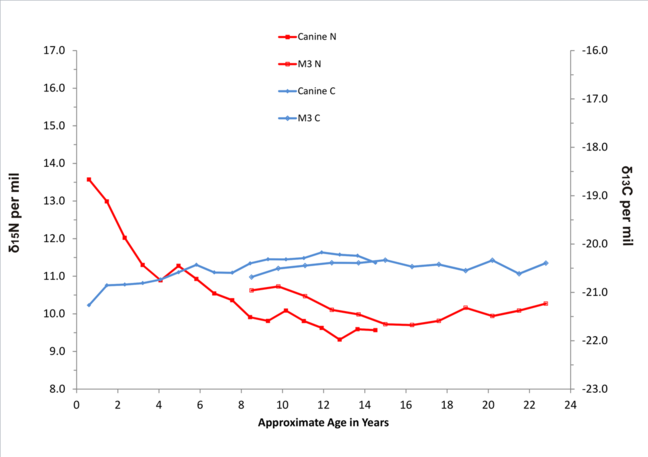 When detailed life histories are revealed in this way by isotopic dentine profiles they can be used to complement the scant historical records of the men and boys who were interred at Palace Green. In this way we can build up ‘biographies’ of the men from childhood to the time of their death - and this takes us closer to their life experiences.