This content is taken from the Durham University's online course, Archaeology and the Battle of Dunbar 1650: From the Scottish Battlefield to the New World. Join the course to learn more.
View course
6.1

The discovery of the human remains near Durham Cathedral in November 2013 did not uncover the story of the Dunbar prisoners for the first time. Far from it, the story was already being told in the 17th century and it has continued to be embellished and presented in different ways on both sides of the Atlantic since then. Fine art, theatre, film, poetry, historical fiction, re-enactment, music, museum exhibitions, these are just a few of the creative outcomes inspired by the story. But what do the perspectives of actors, musicians, writers and museum displays bring to our understanding and how? In this final week we explore how the Scottish soldiers’ story has been constructed, both in the past and today.

To begin with, what was it about these particular human remains which so fascinated the public? Initially, there was surprise that such a discovery could be made in such an iconic location. It is often assumed, wrongly, that a ‘postcard destination’ such as Palace Green in the centre of Durham is an historic environment which is comprehensively understood by archaeologists, historic buildings specialists and historians. Second, quite why the Cathedral was used to house prisoners was a point of misunderstanding for many. The fact that the Cathedral had no religious life during this period is often forgotten (see Step 3.10). Third, there is the Cromwell connection. Historical assessments of Cromwell, both for and against, are not hard to find and were voiced to us with passion on many occasions during the course of our research. Fourth, there were human remains involved and there was little doubting the poignancy of the events surrounding the deaths of the men. Fifth, this was a project which ‘solved a 365-year old mystery’ of the ‘lost Scottish soldiers’. This was one of those rare opportunities in archaeology to research a group of people who were both closely dated and historically documented; in effect our research became both a ‘whodunnit’ and a ‘whatdunnit’. Finally, as we learnt in Week 4, some of the brothers-in-arms of those who were excavated in Durham had a second chance in new lands and it was their US descendants who contacted us in the days after the discovery was first announced. Through them we have come to understand the shared heritage and strong sense of Scottish identity that is still so important today.

Two aspects of the project had particular resonance in the context of current affairs in the winter of 2015 when the results were first announced. Several journalists noted that there were child soldiers among the dead, including some perhaps as young as 13 years of age. This was true, bearing in mind that the human skeleton cannot be aged with complete accuracy (Step 2.2), even if it was a curiously generic inference to draw from such a small assemblage (less than 1%) of those captured at Dunbar. The second issue concerned the rights and wrongs of reburial of the human remains (Week 5), as seen within the wider context of national identities across the UK and the possibility of Scottish independence. 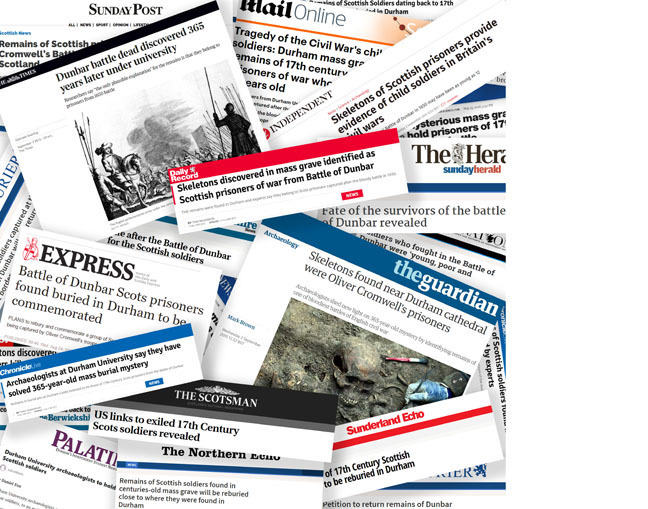 Clearly, the Scottish soldiers’ story does not ‘belong’ to the archaeologist and the historian alone, it is of interest to a much broader audience, and for many different reasons.