The challenges of interpretation on the battlefield

Battlefields are significant heritage assets which, if properly promoted and protected, can provide a sense of place, cultural experiences, and economic benefit through tourism.

‘Dunbar is situated towards the eastern edge of East Lothian, a county with a high concentration on nationally significant battlefields on account of its proximity both to the Scottish capital and the English border. Two other battlefields nearby have interpretation trails and dedicated local heritage groups. But at the end of 2018 neither of Dunbar’s battlefields have on-site interpretation. This is about to change for the 1650 site.

The Scottish Battlefields Trust was established in 2015 to seek greater protection for battlefields by encouraging visitors to explore the locations and by facilitating local engagement. Although much work goes on behind the scenes in lobbying government and heritage agencies, on-site interpretation and community activity are considered to be critical for enhancing the long-term prospects of a battlefield. The Trust began the Dunbar 1650 Project, supported by funding from Historic Environment Scotland, with the intention to install an interpretation trail on the battlefield in 2019. The timing was fortunate as the Scottish Soldiers Project at Durham helped to provide additional impetus and interest to the work at Dunbar.

Planning the interpretation strategy for Dunbar required a number of important decisions and compromises to be made. There was insufficient funding to facilitate the creation of new pathways, meaning the new trail was constrained to existing route-ways. Although most of the battlefield is open ground, it is bisected by both a major road and railway which cannot be safely crossed on foot. A trail encompassing all the Scottish positions would be beyond easy pedestrian reach of Dunbar town centre, limiting its usefulness to hiking parties and serious-minded battlefield visitors; the types of people the site might attract regardless of the trail. A route which led out of the town itself would only be able to reach the Cromwellian army’s positions, and might therefore become unbalanced in its narrative and restricted in its ability to interpret the landscape. There are also parts of the battlefield which cannot be accessed by the general public.

The battlefield does however possess important opportunities too. Most of the ground is open and there are both easily identifiable landmarks – Doon Hill and Dunbar Parish Church, for example – as well as some important viewing positions. There is a stone monolith which was erected in 1950 by the Cromwell Association as a monument to the battle, which is easily accessible by road and provides an obvious commemorative focal point. In 2018 the cement works which owns a large portion of the battlefield also installed a plaque commemorating the prisoners who marched to Durham, near the site of the main cavalry engagement. Dunbar also has a museum housed in the old tollbooth building, which displays a small amount of information relating to the battle presented on text panels. The Town House Museum is also home to a strong local history society, so the building provides potential for facilitating further engagement and interpretation. 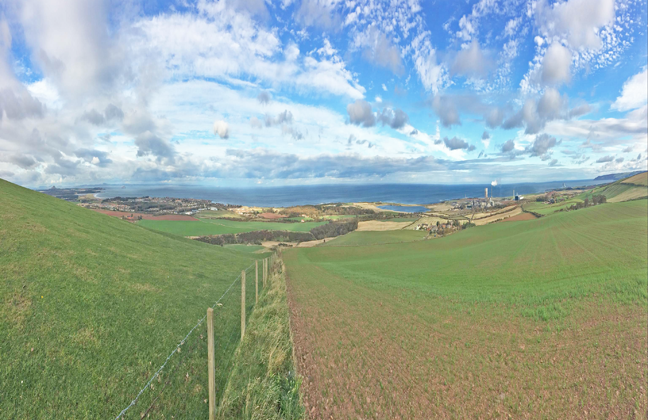 Balancing the challenges and opportunities, the Dunbar 1650 Project has decided to create an interpretation trail which leads directly from the town centre to the stone monument. This builds an important connection between the town and the battlefield. It will comprise of a series of interpretation boards and information posts on a linear route along the line of Cromwell’s main attack, over the Brox Burn and connecting to both the commemorative plaque and the main monument. The main boards will aim to present the background context, chronological narrative of the battle, and explanation of landscape views, in a fairly classical manner. The info posts – wooden sleeper-style posts mounted with plaques – will present a more human story focussing on the experience of ordinary soldiers, written in the first person.

An additional panel on the summit of Doon Hill will present an alternative perspective from the site of the initial Scots camp, summarising the main events and interpreting the view. Finally, there will be a number of bonus information points for the dedicated walker who explores the existing trackways which lead deeper into the battlefield area: QR codes mounted on fence-posts linking to online content and footage of battle re-enactments, designed to give a sense of immediacy to the action for those standing in the heart of it. The Trust always aims to maintain a neutral balance in the tone of its interpretation, avoiding judgemental assessments and rooting its presentation in up-to-date research. That does not mean there is no room for being emotive: after all, the basic experience of fighting is often the same on both sides of an engagement. Nevertheless, the narrative of the Battle of Dunbar cannot be separated from that of the fate of the Scottish prisoners, and so their story will certainly be addressed at the appropriate point.

The interpretation trails will be supported by a programme of community engagement events and school workshops, commemoration activities, and a local group of volunteers will gather to tend to their maintenance beyond the lifetime of the current grant’.