This content is taken from the Durham University's online course, Archaeology and the Battle of Dunbar 1650: From the Scottish Battlefield to the New World. Join the course to learn more.
View course
5.9

The reburial service and ceremony

The remains of the Scottish soldiers were reburied in Elvet Hill Road cemetery (historically named Bow cemetery) on 18 May 2018.

Sophie Daniels, Culture Durham, records her thoughts on the reburial:

‘On May 18th 2018, the Scottish soldiers were reburied in a poignant and reflective ceremony in Durham City.

For me, the entire Project Team and all those engaged with the Scottish Soldiers Archaeology Project, this reburial marked the culmination of nearly five years of research, consultation, and public engagement. During that time and always in collaboration with Durham Cathedral, the University has sought to show the excavated remains utmost respect.

As Project Manager for this project since 2015, I felt a significant responsibility to show these men the dignity they deserved. Their history shaped my day-to-day life for the last three years, and through the research and the facial reconstruction we have found out so much about these men as living individuals, rather than as fragments of the past.

As such, we were very mindful of the need to design a fitting service which would demonstrate our commitment to showing the soldiers respect as individuals in their own right and not just as archaeological remains. In order to achieve this, there were a number of key aspects of the reburial which were designed very carefully:

Our partners, Durham Cathedral, led on the design of a graveside service which would reflect the tradition of the 17th century. In addition, mindful of the fact that the University’s analysis on the bones indicated that not all of the men were Scottish, we sought to create a service which acknowledged their likely religious backgrounds. As such, an ecumenical service was designed, consisting of readings and psalms taken from contemporary versions of the appropriate texts, including the 1650 Scottish Psalter and the 1611 Authorised (King James) Version of the Bible. We were keen to ensure that both the Church of Scotland and Scottish Episcopal Church were also comfortable with the content of the service, so sought feedback and input from representatives of both churches, and we drew upon their comments before finalising the details of the ceremony.

Representatives from the churches in Scotland were invited to attend the reburial and to lead elements of the service alongside the presiding minister, Canon Rosalind Brown from Durham Cathedral. The Revd William Mounsey, Associate Priest at St Vincent’s Chapel, Edinburgh (Scottish Episcopal Church) and Chaplain to The Royal Air Forces Association Edinburgh, Lothians and Borders Branch gave the Bible reading. The prayers were led by Revd Duncan Macpherson, Church of Scotland Army Chaplain. 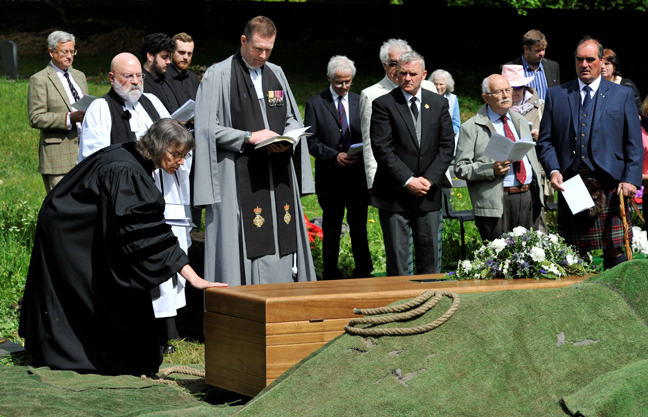 The three ministers led the congregation in scattering Scottish soil on the grave. During the consultation on the location of the reburial service it was suggested that Scottish soil could be used to cover the grave. All members of the Team felt that this would be a poignant gesture recognising the origins of the majority of soldiers, and so sourced Scottish soil from East Lothian (near to the battle site). It was moving to watch all members of the congregation cast a handful of soil into the grave, paying their final respects to the soldiers.’