This content is taken from the University of Reading's online course, Begin Robotics. Join the course to learn more.
View course
4.6 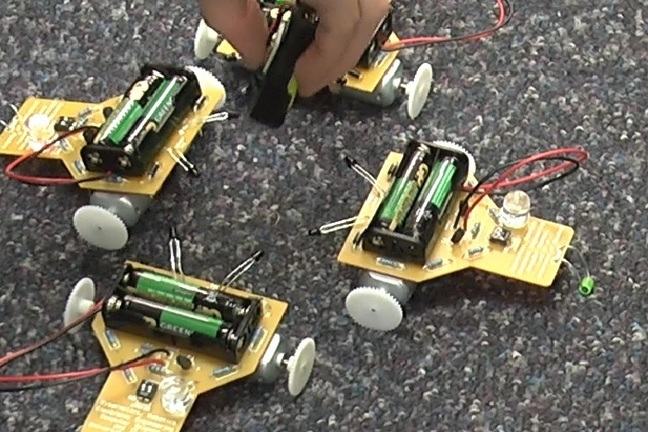 So let’s explain how we can have light seekers and phobes controlled by neurons.

For the Braitenberg vehicle:

The light sensors determine whether a neuron is excitatory or inhibitory.

The two sensors have excitatory connections to opposite motors.

Similarly if the right sensor sees light, the robot will steer towards it. It will be considered an ‘Aggressive light seeker’ as it moves towards light it sees.

Now there is a neuron making the motors go forward, but the sensors are connected inhibitorily to the motors on their side. If the left sensor detects light but the right side does not, the left motor slows down and the right continues forward. The robot steers to the left towards the light seen by the left sensor.

Similarly if the right sensor sees light, the robot will steer towards it. It will be considered a ‘Shy light seeker’ as its reaction is to make the associated wheel slow down on detecting the light.

A light phobe is a robot which avoids light and steers away. Connections can be made for ‘aggressive’ light phobe behaviour.

As for shy light phobe behaviour – How would you do these?