This content is taken from the Trinity College Dublin's online course, The Book of Kells: Exploring an Irish Medieval Masterpiece. Join the course to learn more.
View course
3.5

In the early centuries of Christianity, artists faced a number of challenges in the visual depiction of Christian ideas.

As a result a number of symbols were developed to express the Christian faith. Some of these continued to be used for centuries after their creation, and feature in the pages of the Book of Kells, adding an extra layer of meaning to its text and illustrations.

The most common, and easily recognisable, Christian symbol is the cross. This refers to the Christian belief that Jesus Christ was crucified on a cross to save mankind. In the Book of Kells, one whole page, fol. 33r, is dedicated to an image of the cross. This example has two arms, the second arm perhaps intended to reference the wooden board with the ‘title’ (Jesus Christ King of the Jews) nailed above Christ’s head when he was crucified. The eight large circles on the cross are perhaps a reference to the eight days of the build up to Christ’s death, and his subsequent resurrection (known as the Passion). Other more subtle allusions to the cross are found, for example, in the frames surrounding images of Jesus Christ and the evangelists, and in some of the lettering. A strange form of the letter M in the centre of fol. 285r also seems to reference the double-armed cross. This passage recounts how after being put to death, Jesus rose again from the dead (the Resurrection) (Luke 24:1).

Chi (χ) and Rho (ρ) are the first two letters of the Greek word Christ. They were used universally as a shorthand for writing Christ’s name, and the abbreviation is used throughout the Book of Kells. The similarity of the χ to a saltire cross form instilled additional meaning in the word. The first mention of Christ’s name in the gospels on fol. 34r (Matthew 1:18) is adorned with a particularly lavish χ ρ; the χ outlined in yellow to emphasise its cross shape. The χ is also recalled in the layout of the text on fol. 124r which recounts Christ’s crucifixion (Matthew 27:38) and in the strange position of his arms on fol. 114r.

The lozenge or diamond shape was used interchangeably with the cross in early Byzantine art. Its exact meaning is unclear, but its four corners may be an allusion to the classical concept of the tetragonus mundus (four square world) and its four elements earth, fire, water and air, four seasons etc., or the universe (created on the fourth day according to the Christian bible, Genesis 1:14-19). This interpretation may explain the use of a lozenge rather than the more standard letter form ‘o’ for the word ‘omnes’ (‘all’) on fol. 31r. In early Irish art the predominance of the lozenge form in the Gospel of St John has led to its interpretation as a symbol of Jesus Christ as Logos or the Word following the opening words of John’s Gospel ‘In the beginning was the word, and the Word was with God and the Word was God’ (John 1:1). In the Book of Kells the book held by John on fol. 291v is decorated with a lozenge and the four evangelist symbols that precede it are also arranged around a lozenge shape. 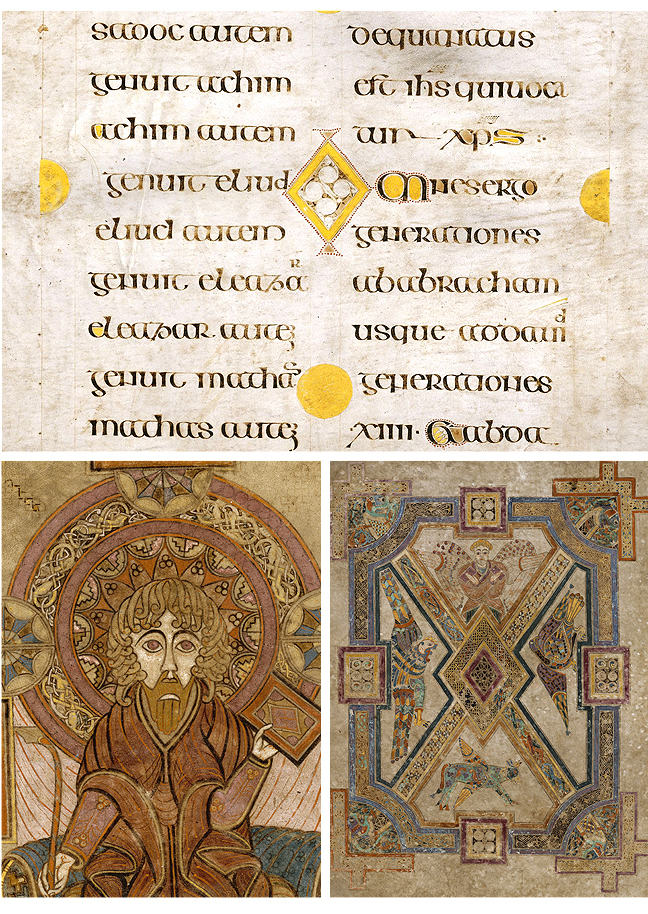 As seen above, the number eight and four were seen to have deeper, religious meanings. So too did other numbers. The grouping of various designs in threes in the Book of Kells has been interpreted by many as symbolic of the Trinity – God the father, God the son and God the Holy Spirit. Three-part designs are found, for example, in the groups of three dots used to decorate clothing, the ends of letters and the groups of spirals on fol. 34r.