In the previous step, we briefly introduced you to the key perspectives of culture. In this section, we will discuss different dimensions of culture.

The fundamental model was proposed in 1961, by Kluckhohn and Strodtbeck as follows:

The six dimensions lay the foundations for business and cultural management research. Using these dimensions, we may develop a more detailed and concrete interpretation of people’s behaviour and interactions. Summarised by Schneider & Barsoux (2003), several researchers, stated in the figure below, have developed these six dimensions in different ways. 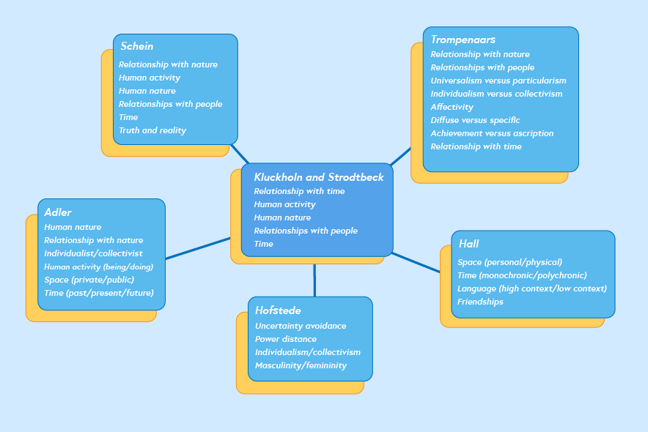 In this figure, Kluckhohn and Strodtbeck’s (1961) conceptual model that lays the foundation for future research is placed in the centre. Their dimensions cover relationship with time, human activity, human nature, relationships with people and time.

Later researchers such as Adler, Hofstede, Hall, Trompenaars and Schein further developed the dimensions of culture. Their dimensions are shown around the outside of Kluchohn and Strodbeck’s in the diagram.

Hofstede argued that there are four dimensions in culture: uncertainty avoidance, power distance, individualism/collectivism and masculinity/femininity.

Trompenaars examined culture from different dimensions such as the relationship with nature, relationships with people, universalism vs particularism, individualism vs collectivism, affectivity, diffuse vs specific, achievement vs ascription, and relationship with time.

Looking at Kluckhohn and Strodtbeck’s (1961) six dimensions, which dimension(s) do you think will pose the greatest challenge(s) to the business world? Why?

Share our thoughts in the comments and read what your fellow learners have written. If you agree with something they’ve said, why not like it? If you disagree, try to explain why.

Get an introduction to mergers and acquisitions with this first course in a program from the New York Institute of Finance.