0:11Skip to 0 minutes and 11 secondsHello, welcome to Week 2. This week, we're going to talk about language for helping learners to understand subject-specific content in English. So Paul, how do you go about this? I'm going to return to the importance of being clear at the beginning of a lesson and clear in whatever activity or idea that you're introducing a lesson to.

0:32Skip to 0 minutes and 32 secondsAs a teacher, you need to be able to chunk up the material to start with - something which is fairly on the basic level say, just on words to begin with, then building up towards sentences, building up then towards explaining concepts or looking at concepts perhaps in a textual level or in the sense of looking at a diagram and trying to bring language and ideas together. It's important, I'd say, to scaffold learning. So in the sense of constructing, we think of building a building.

0:58Skip to 0 minutes and 58 secondsYou could imagine having the building blocks in this which might be those words, adding to them to create those sentences, and then building on that so the students gain great clarity in where they're at, starting from those lower levels and then building up beyond that to feel more confident and be able to use longer language and be able to deal with larger texts as well. And Kay, could you give us some examples of how that would work in real classroom settings? Yes, I agree with Paul that scaffolding is absolutely essential. So if I'm defining a concept in science, I might take in rock samples and define the concept of an igneous rock by saying what it is.

1:38Skip to 1 minute and 38 secondsAnd then I might describe a rock, and the learners look at their rocks and decide which rock it is. But I'd provide a written model as well so they can adapt it for describing or defining different rocks that they might look at. For explanations, Paul mentioned about building on word/text/sentence level. They will need more support. It's much more challenging to explain, for example a rock cycle, than to define or describe a rock. So they may need a language frame, or they may need a diagram, visual organiser, to help them glue their thoughts together. When I want learners to explain themselves, they've got to then produce some language. And I think it's great to do collaborative tasks.

2:29Skip to 2 minutes and 29 secondsBut I think also for clarifying ideas, if we don't give them the support to ask the question - what does that mean? what does extrusive rock mean? - they're not going to ask it. They might think it. But again, it's all this language support to be able to define, describe, explain. That's right. You can't assume that they know those kind of words or those ways of saying things. You've got to rethink very hard as a teacher. You've got to be able to think, OK, what do I want to get out of this part of the lesson? Where do I want them to get to?

3:01Skip to 3 minutes and 1 secondSo you could give them some kind of sentence structure, and you can give them gaps in sentences they could fill in as they go along. Gradually take away those bits of support - in return to the scaffolding idea - so that then they're capable of doing things. And suddenly before they know it, they're able to use all this language and put these concepts together.

While you watch, look at the words in this word cloud. Which words do Helen, Kay and Paul use? How are the words connected to this week’s topic? 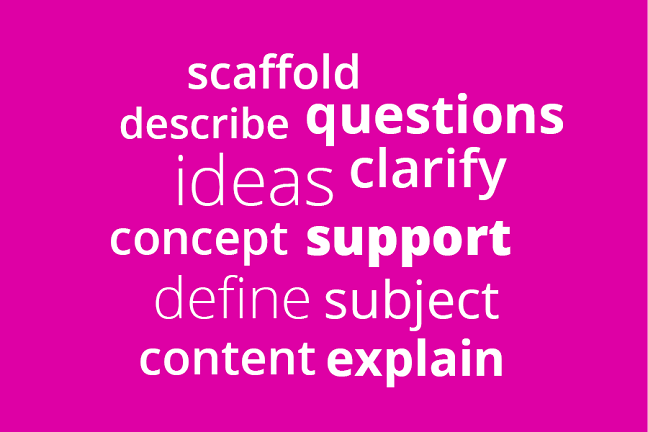 Check your answers with the pdf in the downloads section.

Task
What key words do you need to define and explain in your subject? For example, in the video, Kay talked about defining and describing igneous rocks.

Choose six key words you regularly need to define then share them with us in the comments. Look at other participants’ words and see if you can work out the subject they teach.

Click on this link to make a word cloud of your key words, then share the link in the comments section.

Getting learners to evaluate/reflect on learning