0:11Skip to 0 minutes and 11 secondsWelcome to Week 5. This is our final week. Today we're talking about how you can make sure learning is happening in your classroom. So that might be when you're looking at group work, or perhaps at the end of the lesson or towards the end of an activity. How do you ensure that learning is actually happening? First of all, I'll pick up on that point about learning throughout because it's not just at the end. People of course will be aware when they're teaching what they're teaching, whether it's referring back to those objectives, it's always nice to revisit from time to time in the lesson what's going on.

0:41Skip to 0 minutes and 41 secondsTowards the end of the lesson, however, is a really key part when the students can feedback to you on what they've learned. So you could ask them what they think that they have learned something, what they've learned, as well. Hopefully, it will be the same thing you were hoping they're going to learn. Yes, I think that the monitoring, as Paul mentioned, is really, really important. But in large classes you can't monitor everyone in one lesson. So I have to plan who I'm going to monitor over a term.

1:09Skip to 1 minute and 9 secondsSo I try and make a plan that I monitor everyone at the beginning of a term and the end of a term, and then I can see who will need more monitoring and more support. So I can differentiate learning that way. But that's, for me, that's very critical. And monitoring not just subject content learning, but also the language that they're learning. So it's the two sides of the coin. Or I might ask them to do self- or peer assessment evaluating, which I think is also very, very important. And they get better at doing it. It helps their critical thinking skills. I'd like to pick on that peer assessment point of source.

1:48Skip to 1 minute and 48 secondsI think that's a really good way of trying to get students to work together, to help each other out as well. It also helps them to feel more comfortable to reflect on what they're saying. If you give them a moment or two just to talk to somebody next to them, so they can perhaps think by themselves, think with somebody else, and then share it with everybody else because think, pair, share is quite often a common technique which we use in teaching. But it's quite nice because it might make those who perhaps are more shy and more reluctant to speak out to feel that what they've said actually has value.

2:17Skip to 2 minutes and 17 secondsAnd if they're testing out on just one other individual, they may then be more confident to say it in front of everybody else. It enables them to practise that language too. It enables them to use those kind of constructions in language, which you hope that they would learn and use, and then they'll feel more able to say them out loud and they'll gradually gain in confidence in doing that. I completely agree. And it's wonderful to see learners who are very reluctant to speak in English about a subject at the beginning of the year, how confident they can become doing peer assessment or group assessment evaluation. And they will sometimes come up with amazing comments about how another group can improve.

2:57Skip to 2 minutes and 57 secondsThey will, they're very pertinent. They're very good at assessing each other. They're actually very kind, but very sensible with the whole thing as well. OK, so Paul, how do you bring this all together? It's bringing it all together not just at the end of a lesson, but also the end of certain activities. It's working out in your own mind what you want students to have done at certain specific points of that lesson, be it throughout or be it at the end. So you can summarise, you can emphasise key points. Importantly though, try to get that from the learners themselves. Don't just assume that they've learned certain things.

3:28Skip to 3 minutes and 28 secondsIt's good always to ask the learners to try to say for themselves what they think they've learned, either up to that point or at the end of the lesson. And you can ask more than one person. Bounce it around the room a little bit. Don't just get the keenest student who might be the one who's also the best at English or the best at the subject content. Ask around the class so you're really clear that all areas of that classroom have understood what you're expecting them to understand so you can then get a really full idea of what's gone on so far, have those key points emphasised, summarise certain things.

3:59Skip to 3 minutes and 59 secondsAnd then if they're not quite there, that gives you the opportunity then to re-emphasise, to re-summarise, to re-teach as well.

Watch Helen, Kay and Paul discussing how we can make sure that learning is happening.

While you watch, make a note of any key terms that they use to talk about checking and evaluating learning.

See if you can find nine of these key terms in the wordsearch below. If you need a clue, the first letters of each word are included below the wordsearch. 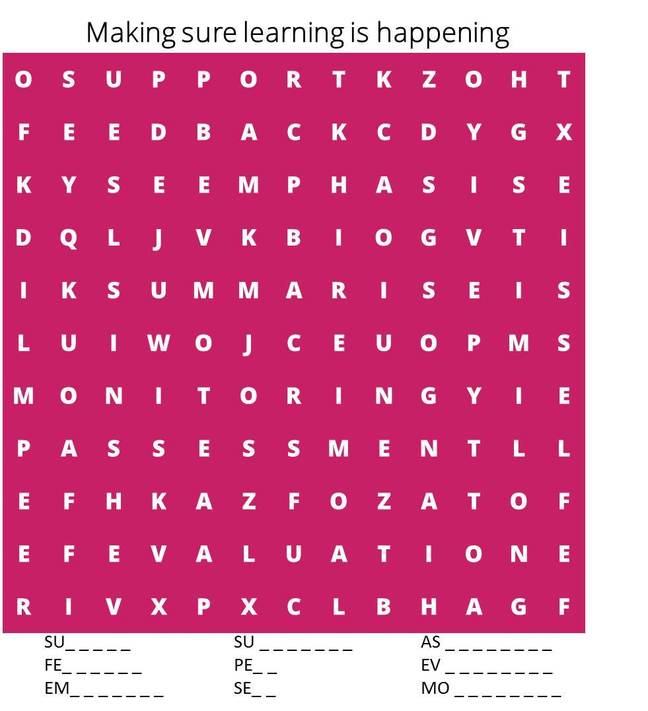 Check your answers with the pdf in the downloads section.

Getting learners to evaluate/reflect on learning