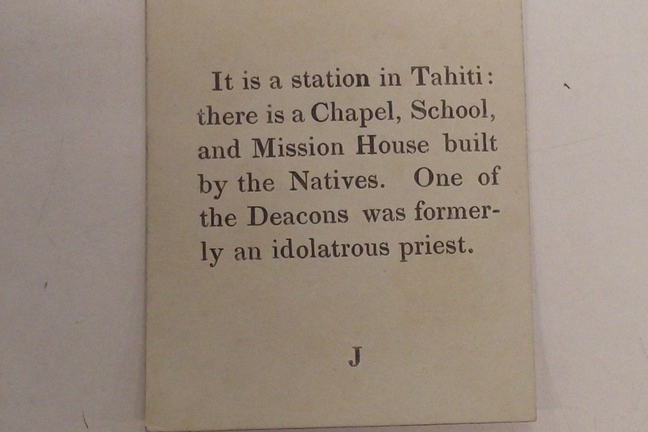 Before we begin, please consider the following questions:

There are polarised opinions in the Pacific regarding Christianity. But there is an undeniable connection between the missions and the process of colonisation and expanding empire. Mission histories have had significant influence on identities and cultures in the Pacific.

Various different Christian denominations brought Christianity to the Pacific. But the foundations of many churches in the South Pacific and denominations of Christian faith lie in the revival of Protestant Evangelism and the establishment of the London Missionary Society (LMS).

The LMS was formed at a meeting of independent church leaders, both Anglican and nonconformist, held in London in November 1794.

The object of the LMS was ‘to spread the knowledge of Christ among heathen and other unenlightened nations’ [1]. The first mission of the LMS left Britain in August 1796 arriving in Tahiti in March 1797.

Prior to Missionary arrival, people of the Pacific had experienced challenges caused through religious and temporal power struggles. Many had associated activities seen as ‘uncivilised’ by the missionaries wanting to convert them. These activities may have included cannibalism, nudity, worship of idols, war, bigamy, and dancing.

For more information on the history of the LMS go to Downloads below, or click to see the SOAS digital collections archive.

The initial conversion process was difficult. There were many groups and islands and every relationship was different. Many missionaries channelled energy into mentoring individual converts. The knowledge of language and cultural similarities became significant to the success of the conversion process: people of the same village or island were more likely to find a connection, and be more influential in converting their own. [2] See the Downloads below for a table on language similarities in Polynesia.

The spread of Christianity

Christianity spread with influence from the top down, rather than from a social movement. However, appeal from people below sometimes forced the elites to convert. Smaller populations converted faster. Listen to this Radio New Zealand podcast by Jamie Tahana for a detailed study.

Because social systems were interwoven with the religious systems, removing the cultural gods destroyed established structures of society, guidance and government. With the displacement of traditional roles, people adapted and changed. These changes were to shape the cultural landscape of the Pacific forever. [3]

Christianity remains dominant in Oceania today and in many countries a majority of the population identify as Christian. Go to the Downloads section below for statistics on Christianity in Pacific countries by percentage of population.

Some younger generations in the Pacific are very active in the revitalisation and acknowledgement of their original belief and associated value systems. In many cases they have found a way of combining the two: their belief in God and practice of Christianity with ideas of cultural tradition.

Some older generations are not able to see the benefit or purpose of the duality.