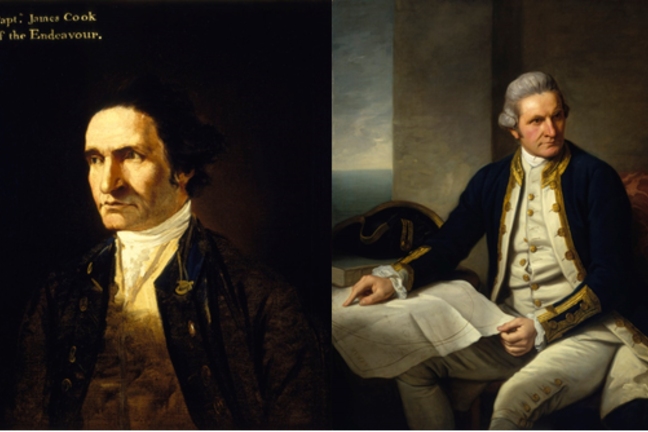 Far beyond merely recording a likeness (and even the idea of a ‘likeness’ is elusive and highly subjective) portraits can reveal information about the person depicted (the ‘sitter’), as well as the society in which they lived.

Portraits can provide important context to written sources. But, like written sources, we need to consider the particular circumstances in which they were made, and for what audience.

We are going to look at two portraits of James Cook that are in the National Maritime Museum collections as a way to better understand different perceptions surrounding him at the time of his voyages. The portraits are by two different artists.

William Hodges, whose painting is on the left, was the official artist appointed to record the places visited by Cook on the second voyage (1772-75). Nathaniel Dance, whose painting is on the right, was one of the founder members of the Royal Academy in 1768. He was commissioned to paint Cook by Sir Joseph Banks, an influential scientist on the first voyage, (1768-1771).

What do you see that is similar in these two paintings?

What do you notice that is different?

There are certain aspects of a portrait we can focus on when interpreting an image. For these two images, consider:

Using only the details present in the two paintings, can we gain a better understanding of the perceptions and opinions of Cook at the time?

Think about the circumstance in which these portraits were painted.

What do these portraits say to you?

Discuss with your fellow learners.

You can read more about the Hodges portrait and the Dance portrait in the Museum’s online collections.