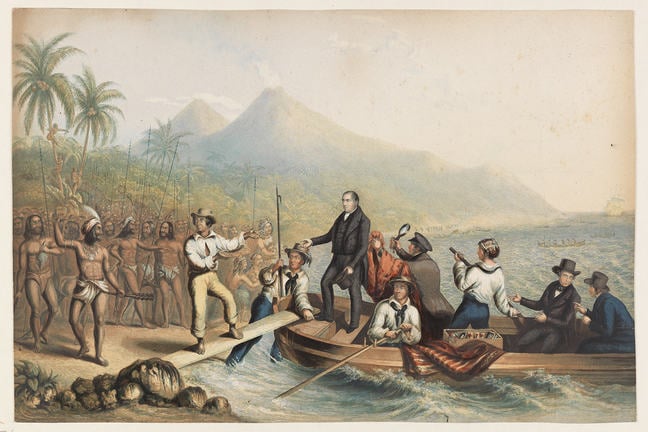 Rev. John Williams landing at Erramanga in the New Hebrides, 1844

John Williams (1796 – 1839) was a prominent member of the London Missionary Society (LMS). Enterprising and highly successful in his mission to take Christianity to the people of the South Pacific, he was responsible for strategic advancements in the conversion of many different islands.

He volunteered as a missionary following the breakthrough conversion of Pomare II in Tahiti. In November 1816, after the short process of ordainment, Williams, along with his wife Mary and other members of the LMS set sail to Australia, leaving there for the onward voyage to Tahiti in September 1817.

While always driven by his faith, John Williams was able to identify opportunities for mobilising the influence of Christianity inside different groups within local societies by building and procuring boats to maintain inter-island contact. He was able to gain support by recruiting new agents with the advantages of local language and cultural knowledge.

Mary Williams was also influential. She learned Tahitian and preached in the language. She also held regular meetings for women, helping to bring the elderly and disabled into community life. Together she and John had ten children, but only three survived into adulthood.

'’So great are the advantages on the side of a native teacher at the commencement of a Mission over a European, one colour, almost, one language, and a oneness of habit gives them these superior advantages” (Williams) [1]

Williams wrote instructions for the Christian deacons and teachers on the islands on how to lead ministry in the new lands. These included advice on what to do with old ‘idols’. He wrote:

The ‘idols’ were to be sent back to Raiatea and then on to London, to be used both to fundraise and in the formation of the LMS Museum. The museum opened in 1814 in Blomfield Street in London to a paying public. The museum became a popular attraction and was visited by both supporters of the LMS, the public and later by enthnographers and scholars.

Williams’ career is marked by many extraordinary achievements including being present at one of the earliest European encounters with Rarotonga in August 1823. He was also involved in the conversion of Samoan leader Malietoa Vainu’upo and the subsequent claim to Samoa as a Christian country (1830).

After returning to Britain to print the a Rarotongan translation of the bible in 1834, Williams used his celebrity status to encourage funding to support the purchase of ships and mission work. He published ‘Narrative of Missionary Enterprises in the South Sea Islands: with Remarks Upon the Natural History of the Islands, Origin, Languages, Traditions and Usages of the Inhabitants’ in 1837 before he returned to the Pacific Islands.

In November 1839 John Williams and a colleague, James Harris, were killed on the beach at Erromanga, Vanuatu (New Hebrides) and believed to have been eaten.

As missionaries today play a role in the continuing process of colonisation, should we not only consider evangelism from a historical context, but also from the present as invasive to real-time cultural belief systems?

Reflections on the life and ministry of the Revd. John Williams, pioneer missionary serving under the London Missionary Society 1816-1839’ p9. written by Glyn Jenkins, 2005. Available from: http://www.urcic.org.uk/reflections.pdf