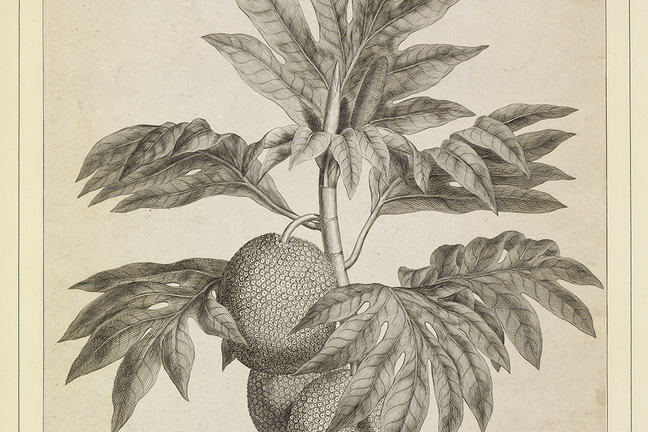 A branch of the bread fruit tree with fruit, Sidney Parkinson

‘The expeditions employed a total of three ships, 190 seamen and officers, four gardeners, and two captains. Thousands of pounds were spent fitting the ships as floating plant nurseries, and thirty-three months of voyaging was borne, all in an attempt to pot and transport Tahitian breadfruit trees.’ [2]

Breadfruit is a starchy, potato-like fruit with a hard skin that grows on trees across Asia and the Pacific. It needs little cultivation and the fruit is usually roasted or baked.

In the late 1780s, Joseph Banks petitioned the British government to provide a ship for a voyage to Tahiti to collect breadfruit plants for transplantation to the Caribbean.

Why transport it to the Caribbean?

In the Caribbean, a European elite owned plantations, producing tropical produce, principally sugar. This was grown, harvested and processed by a huge workforce of enslaved Africans, who toiled in terrible conditions. But by the 1780s, these plantation owners feared bankruptcy. Severe weather conditions had decimated locally grown produce and the years of conflict during the American War of Independence, leading to American independence in 1783 disrupted trade patterns and introduced new in trade restrictions.[3] It was estimated that 15,000 Africans died in Jamaica as a result of the ensuing hardship. Illness and death of the enslaved African workforce reduced production and threatened the profits and investments of the plantation owners.

Plantations owners were a wealthy and influential group able to pressure the government into providing a means of protecting their investments.

Banks identified breadfruit as a high energy food that would flourish in the Caribbean climate and therefore become a cheap way for plantation owners to feed their enslaved workforce.

It was also part of a wider ideology of 18th-century colonialism that viewed the global movement of plant species, including cotton, hemp and coffee, as a way of creating a self-sustaining British Empire. Rumours abounded that France was attempting to transplant breadfruit to support French colonies and the fierce competition between the two nations also encouraged Britain to act.

Breadfruit in the Pacific

Banks perceived breadfruit as being plentiful in the Pacific islands. This approach fitted a European myth of the Pacific as idyllic lands of plenty. [4] While breadfruit was quick to reproduce, Banks did not appreciate that its growth and consumption was governed by protocols in Tahiti. [5]

William Bligh was selected to command the Bounty voyage to transplant breadfruit. Unsure of how the Tahitians would react to a request for many of the plants, and concerned about an increase in the ‘price’, Bligh concealed the true purpose of the mission from the Tahitians. Bligh met with Tu (the chief-regent in Tahiti), and asked whether he would like to send a gift to King George, and when breadfruit was suggested he said that that was what King George would like the most. Tu considered the provision of the breadfruit as part of building an alliance with a powerful ally across the ocean. The Bounty left five months later with 1015 breadfruit plants. [6] 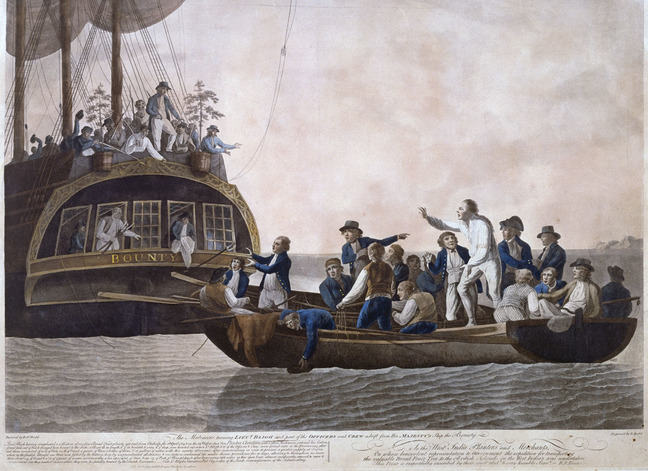 Once at sea the crew of the Bounty mutinied. Nine mutineers settled on the island of Pitcairn, taking twelve Tahitian women and six men with them. Today Pitcairn remains a British overseas territory with a small population descended from the original mutineers and Tahitians. Fourteen mutineers remained on Tahiti and integrated into Tahitian society, participating in political intrigues and battles. [7]

Banks petitioned the Admiralty for another attempt; this time, along with motivations for the first mission, there was the added incentive to not allow the grand plan to fail on account of mutiny. The Providence accompanied by the Assistant set sail for Tahiti. This time the boats were laden with 2126 plants. Tu wished to accompany Bligh back to England and finally to meet King George III. In the end it was agreed that Maititi, one of Tu’s servants, would go instead.

1,217 breadfruit plants made it to gardens in the Caribbean, along with Paupo, a Tahitian who stowed away to join the voyage. Sadly Paupo died in Jamaica in 1793, and Maititi died as the ship arrived in London. He is buried at Deptford. [8]