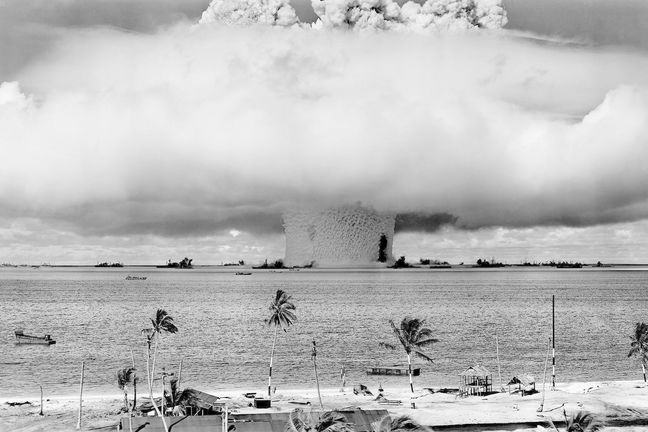 The "Baker" explosion, part of Operation Crossroads, a nuclear weapon test by the United States military at Bikini Atoll, Micronesia, on 25 July 1946.

Nuclear testing in the Pacific

Let’s look at an example of how colonial activities in the Pacific have affected the peoples of the Pacific into the 20th and 21st centuries.

Between 1946 and 1996, the United States, Britain and France conducted Cold War programmes of nuclear testing in the deserts of Australia and the atolls of the central and south Pacific.

Britain had already joined the United States and Canada’s research project into an atomic bomb in response to the warning that Germany might be developing its own bomb just before the beginning of the Second World War. The Manhattan project carried out its first test of an atomic device in New Mexico on 16 July 1945. By mid-August the US had dropped atomic bombs on the Japanese cities of Hiroshima and Nagasaki. [1]

Nations fought for supremacy in the nuclear arms race. Over five decades more than 315 nuclear tests were held across the Pacific region. [2] This resulted in the contamination of islands and the displacement of populations.

The Pacific Proving Grounds was the name given by the United States government to a number of sites in the Marshall Islands and other sites in the Pacific Ocean at which it conducted nuclear testing between 1946 and 1962. The United States tested a nuclear weapon (codenamed Able) on Bikini Atoll on the 30th of June, 1946. [3]

American nuclear experiments in the Marshall Islands ended in 1958 after 67 tests. Islanders had been displaced, and a United Nations report in 2012 said the effects were long-lasting. Special rapporteur Calin Georgescu, in a report to the UN human rights council, said “near-irreversible environmental contamination” had led to the loss of livelihoods and many people continued to experience “indefinite displacement”. [3]

As a result of being displaced we’ve lost our cultural heritage – our traditional customs and skills, which for thousands of years were passed down from generation to generation.’ [4]

By 2009, the Nuclear Claims Tribunal, funded by Congress and overseen by Marshall Islands judges to pay compensation for radiation-related health and property claims, exhausted its allocated funds with US$45.8 million in personal injury claims still owed the victims. [5]