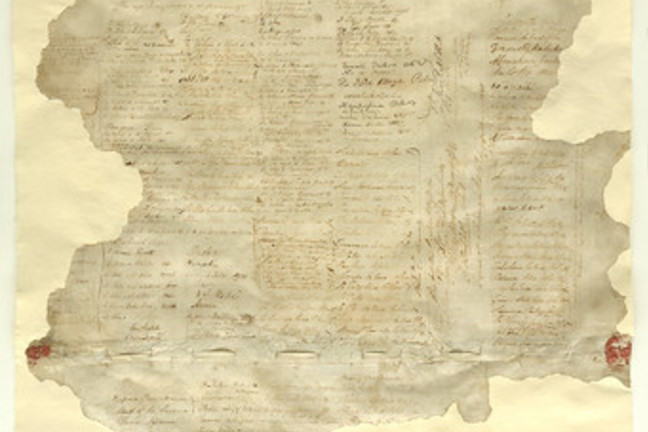 The Treaty of Waitangi

The Treaty of Waitangi, New Zealand’s founding document, was meant to be a partnership between Māori and the British Crown. Although it was intended to create unity, different understandings of the treaty, and consequentially breaches of it, have caused conflict.

It is an agreement made made in 1840 between representatives of the British Crown and more than 500 Māori chiefs. It resulted in the British Crown gaining mandate for colonisation and Lieutenant Governor William Hobson declaring sovereignty over New Zealand in May 1840.

New Zealand before the Treaty

New Zealand had independent sovereignty and was Māori controlled. There was an increasing number of settlers, including missionaries, sealers, whalers. Expansion of New Zealand’s trade and shipping was occurring. The social climate was becoming chaotic, with no law controlling unruly British subjects, and Charles Philippe de Thierry making moves towards claiming the territory of Hokianga.[1]

A group of Ngapuhi chiefs write to the King William IV in 1831 to ask for protection from other powers and to form an alliance for the future. At the same time European residents asked the British government to intervene to maintain order.

James Busby was responsible for facilitating He Whakaputanga o te Rangatiratanga o Nu Tireni in 1835. This was The Declaration of Independence of United Tribes of New Zealand, and consisted of articles that gave sovereign independence to the Confederation of United Tribes. The declaration was formally acknowledged by the British Crown in May 1836.

The British Government took additional action in 1839, after they became concerned with European speculators reportedly purchasing vast areas of New Zealand. They appointed William Hobson to consult with an independent New Zealand about becoming British. His instruction directed him to negotiate for the sovereignty of New Zealand and to establish a British Colony.

Creating the Treaty of Waitangi

The Treaty of Waitangi was created from the notes of William Hobson, written up and added to by James Busby and translated into a Māori version by the missionary Henry Williams and his son, Edward.

The initial signing of the Māori Version of the Treaty of Waitangi took place at Waitangi on 6 February 1840 and would be signed by over 500 chiefs from around Aotearoa/New Zealand before the end of the year. Thirty-nine chiefs were to sign the English Version.

In October, following the signing, William Hobson would declare British Sovereignty over New Zealand. This would be followed by increased immigration of people from Britain, leading to war between the Māori and British, land confiscation, law changes and ultimate oppression of Māori rights and culture.

Issues with the Treaty of Waitangi

Not all chiefs signed the treaty, and most the chiefs that did sign, were party to the Māori version of the document. The two versions were dissimilar in translation. The Māori version granted ‘te kawanatanga katoa’ (governance) over the land to the Queen, but Māori were to retain ‘te tino rangatiratanga’ (total control) over lands and ‘taonga’ (things of importance to them). The English version gave ‘all the rights and powers of sovereignty’ over the land to the Queen. It also confirmed that the Chiefs would have ‘exclusive and undisturbed possession of their lands and estates, forests, fisheries and other properties’.

The Crown sought an exclusive right to deal with Māori over land transactions and claimed that Māori would have the Queen’s protection and all the ‘tikanga’ (rights) accorded to the British subjects.

Immediately following the signing immigration increased, directly resulting in conflicts connected to sovereignty and the ownership of land. This led to battles between British and Māori, land confiscation and the ongoing oppression of rights and culture, resulting in the compounding loss of population and rendering the Māori a minority in their own country.

With traditional rights of chiefs soon limited and in conflict with the Crown, breaches of the treaty occurred.

Since 1840 various and multiple breaches by the government in relation to the education, health, and welfare of Māori have been made. The Tribunal assists in making recommendations to the Crown as the Treaty of Waitangi is not common law, but the clauses are regarded as statutory developments.

Compare the two versions of the Treaty

To see a comparison the English and the Maori versions of the Treaty go to Downloads below. With thanks to The Treaty Resource Centre.