The Death of Cook in Art

Let’s look at a few different artistic interpretations of the death of Cook in art.

Here are the some of the reasons for the many different versions of the event at Kealakekua Bay:

All of this lead to a variety of artistic interpretations.

The first printed illustration of the Death of Cook was a large, fold-out illustration included in John Rickman’s Journal of Captain Cook’s last voyage to the Pacific Ocean (1781). 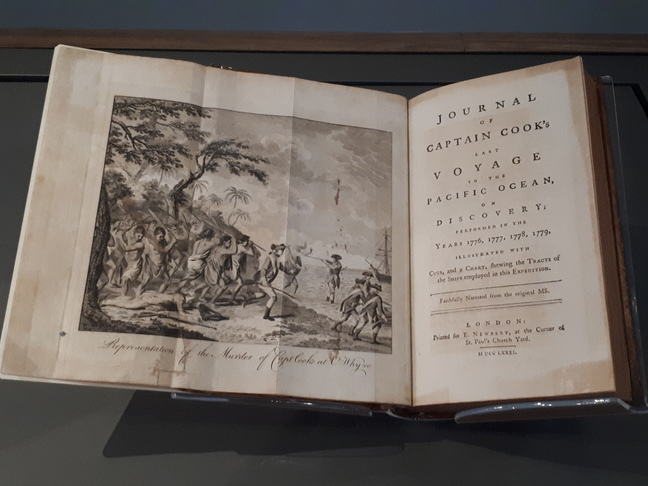 Webber was the official voyage artist on the Resolution/Discovery, although it is unlikely that he actually witnessed the death of Cook.[1] He painted his version of Cook’s death in 1781-83, as a watercolour and an oil painting. The watercolour was subsequently turned into an engraving and printed. 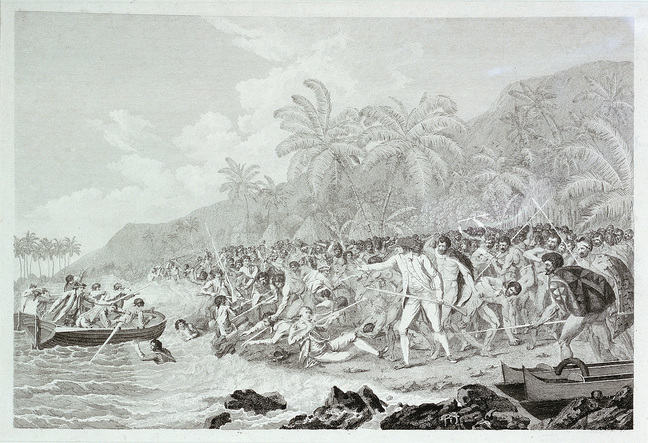 The Death of Captain Cook (untitled)

In Webber’s version Cook is not yet dead, or even fallen, but instead stands gesturing towards the firing marines while the Hawaiian man behind him is poised to strike. A recently uncovered document, thought to be in Webber’s handwriting reads:

‘Captain Cook, as represented in the Print, was calling to his People in the Boats to cease Firing, when a Chief advancing from the Croud (sic), plunged a Dagger in his Back, and falling on his Face was immediately destroyed.’ [2]

Thereby he presents Cook as a martyr, sacrificing himself to prevent further deaths.

There are similarities between Cleveley’s composition and Webber’s.[3] An earlier watercolour in a private collection, also by Cleveley, shows a more combative Cook, facing the Hawaiians and wielding his musket. Williams notes that the engraver in 1788 (Cleveley died in 1786) altered the image to be more like Webber’s martyr.[4] 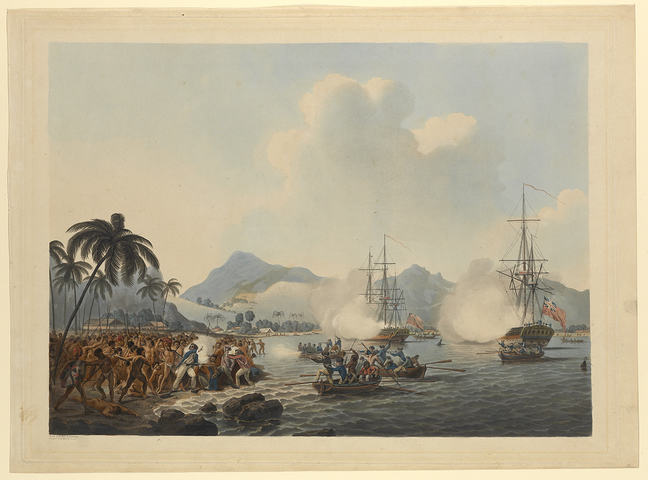 ‘The View of Owyhee [Hawaii], one of the Sandwich Islands in the South Seas, With the Death of Captn Cook’

George Carter (who submitted his work for the Royal Academy summer exhibition, but was not selected), painted Cook wielding his musket as a defensive baton rather than for firing. Carter’s large oil painting is now in the collection of the National Library of Australia.

Ramberg’s submission to the Royal Academy, now in the collection of the State Library of New South Wales, shows a more bedraggled and bloodied Cook, about to be overwhelmed by his attackers (c 1784). 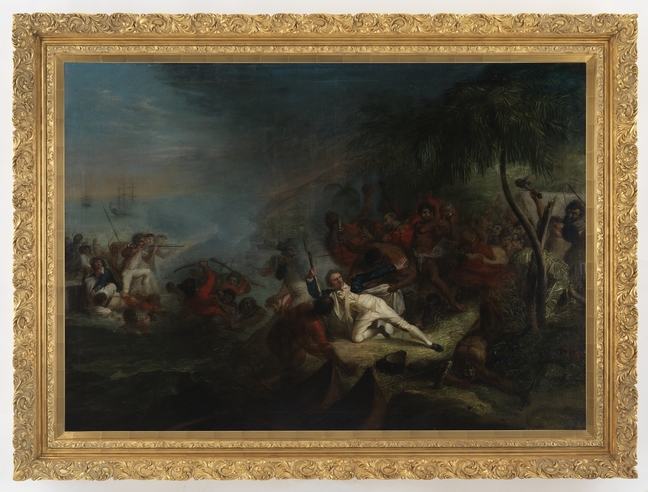 An abridged version of the Voyage Accounts was printed in 1784 and included an engraving by Dodd. This version shows Cook face down in the sand, possibly being pulled from the shore. 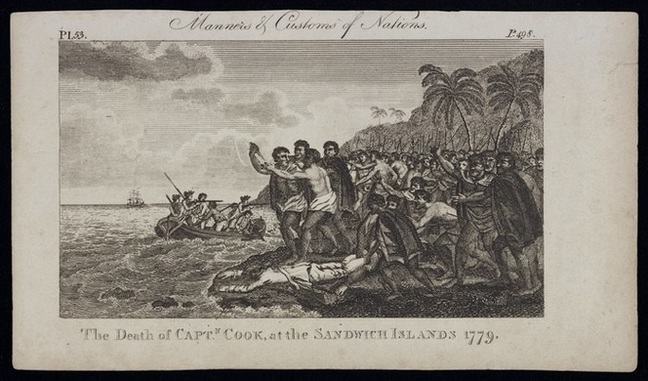 In 2013 Julien Domercq curated the exhibition The Death of Captain Cook: Mythmaking in print, exploring the many different images and interpretations of the event. You can also read his blogpost about the exhibition by going to See Also below.

With thanks to Ben Pollitt for sharing his research.