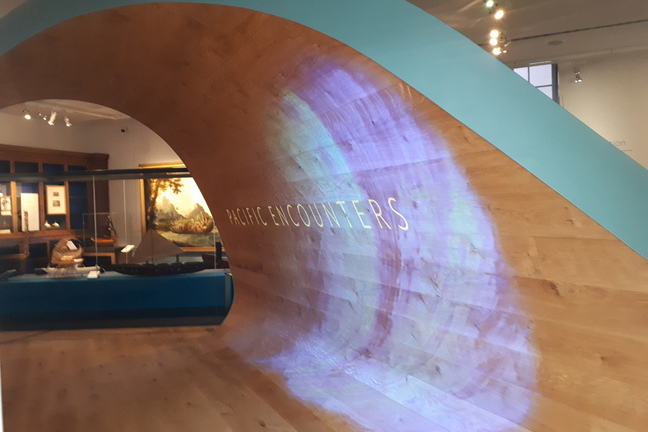 We opened ‘Pacific Encounters’ at the National Maritime Museum in September 2018. ‘Pacific Encounters’ is one of four new galleries in what was formerly office space (the others are Tudor and Stuart Seafarers, Polar Worlds and Sea Things). The new galleries were intended to improve visitor flow, address ‘gaps’ in the historical narrative of Britain’s seafaring history, up to that point not shown in the museum.

We wanted to tell both sides of an encounter story, but one of our challenges was the limitations of the collection.

We had a small collection of taonga and a larger collection of objects relating to British voyaging, such as navigational instruments, publications and portraits. 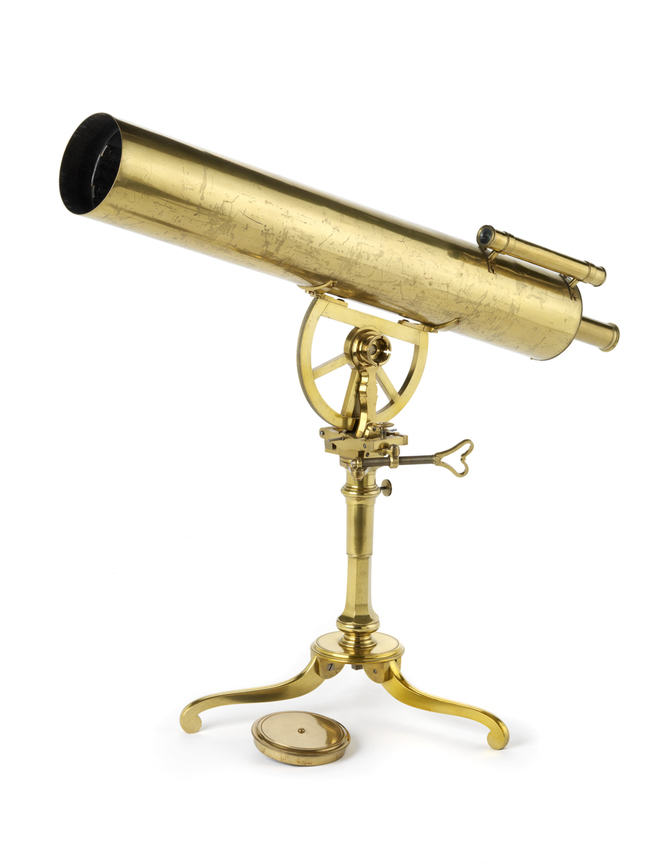 Here is a whistle-stop tour of the gallery narrative and some of the objects:

The gallery can be viewed from ‘pasts’ to ‘presents’, or ‘presents’ to ‘pasts’ (plurals here are deliberate: remember 1.8 The trouble with timelines). The sections are:

And here are some of the approaches we used:

(Learning curve: we didn’t start this early enough and would like to have done more!)

We consulted with the Pacific diaspora community in London, and later, some groups and individuals in the Pacific, about what stories they would like to see in the gallery, and how we should interpret the taonga. We used these consultations to frame the narrative, the interpretation of the taonga, and to think about the language we used. 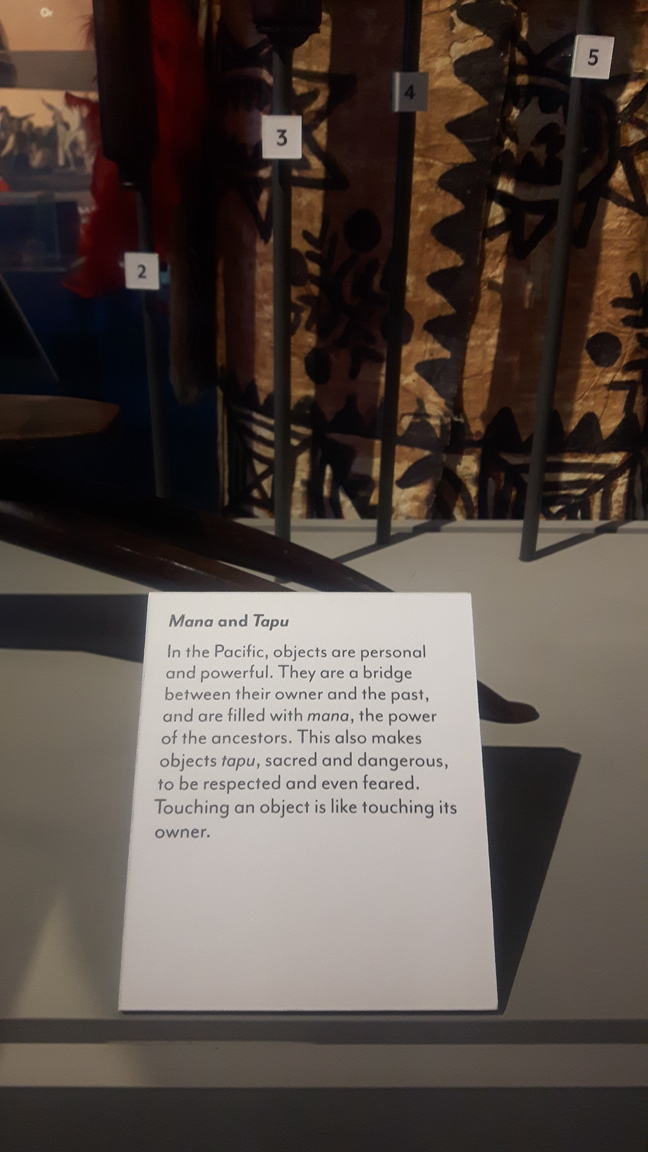 We tried to make sure that all of these people were named on the acknowledgements panel when the gallery opened. 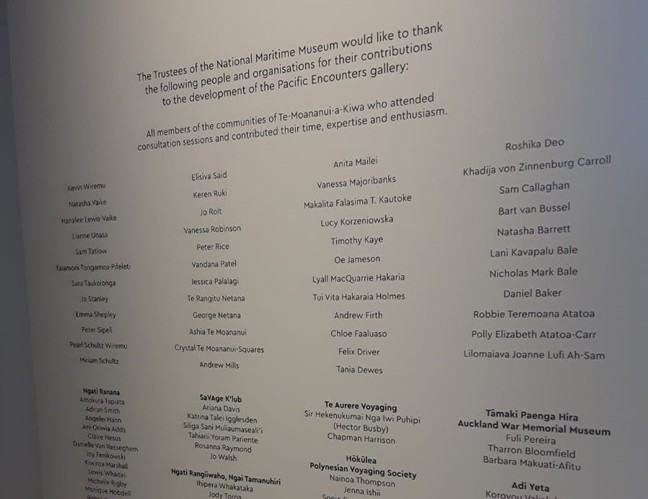 Language is important – we never use the possessive in the gallery for the Ship’s Captains, it is never ‘Cook’s ship’ or ‘Cook’s Voyage’, but always named after the ship. This helps democratise the stories. Our ship model of the Endeavour has a full complement of the European crew. In the future I would like to commission a Tupaia to join them. 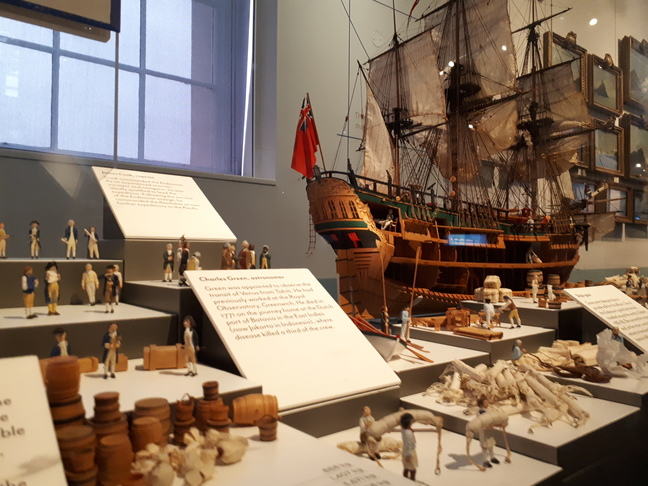 There are no known images of the Raiatean navigator and explorer Tupaia. Tupaia is largely responsible for the success of the Endeavour’s voyage, having joined the voyage in Tahiti and guided the Endeavour around many of the islands. He helped them to communicate with the Tangata Whenua (People of the land). In Aotearoa/New Zealand the Māori remembered him as the leader of the voyage.

It was important that all figures in the stories we told were given an equal presence, whether there was a huge oil painting, a photograph, or no image to accompany them. We used ‘character labels’ to give each human story an equal weighting, and for Tupaia we worked with our designers and Lyall Hakaria, one of our stakeholders, and artistic producers to create a presence for Tupaia in the gallery.

Throughout the interpretation, we subtly encourage visitors to think about gaps in stories and collections and about other ways of recording history or commemorating individuals; that a lack of a huge portrait doesn’t make someone less important to a historical narrative. 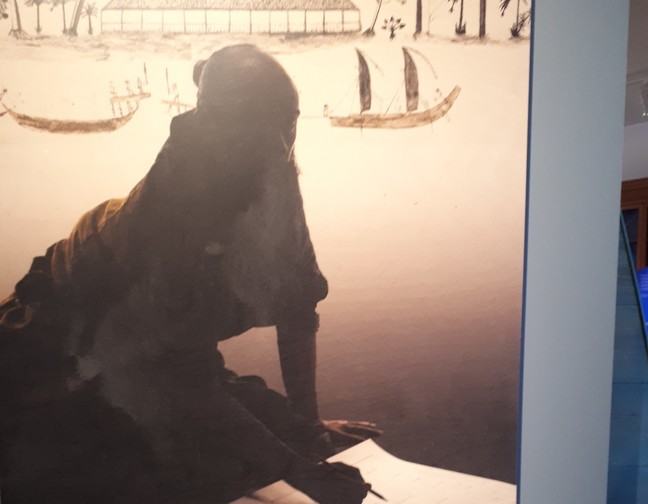 As a maritime museum we might not have the collections or remit to focus comprehensively on cultural practices and a wider history, but voyaging is one of our key themes and there is a strong history of voyaging across the Pacific. We book-ended the gallery with stories of Pacific voyaging to try to challenge a traditional European presentation that the only people voyaging and exploring in the Pacific were Europeans.

We commissioned Ashia Te Moananui, a Māori illustrator, to help us to celebrate Pacific voyaging and wayfinding.

(Learning Curve: There are some stories that are sacred; they are not for us to know, or for us to tell. We can still celebrate voyaging and be respectful of boundaries). 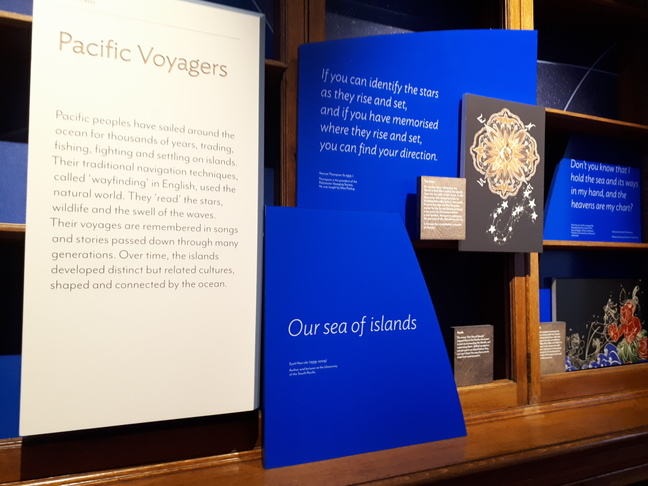 Collections can never tell the whole story. We wanted to talk about trade, exchange, and collections in the Pacific. People did not give up their taonga lightly. We commissioned the SaVAge K’lub to create an artwork responding to a quote by George Tobin on the Providence “At Tahiti they too have their cabinets of European curiosities”. They created Captain Cook was a Pirate, displaying what was left behind in the Pacific by Europeans. 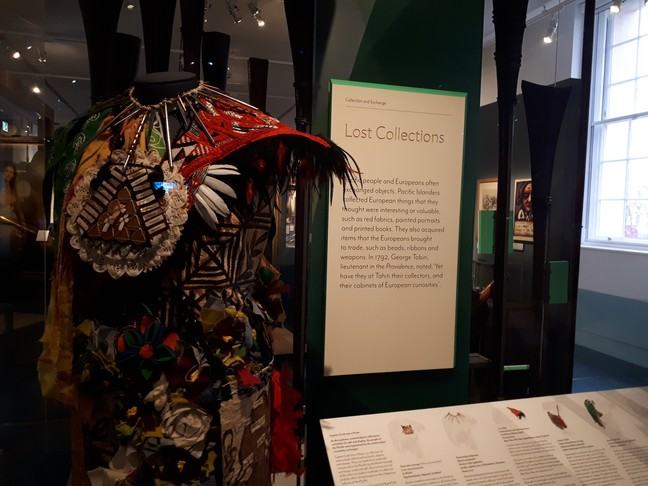 Lost Collections label and ‘Captain Cook was a Pirate’ display

The Representations Project is a set of screens in the gallery that shows a moving collage of images of the Pacific today, provided by institutions, organisations and individuals across the Moana. The screens are intended to give voice to a modern, vibrant Pacific, in comparison to the paintings by Hodges, Webbers and Westall.

(Learning Curve: There have been some technical challenges with this project, and in how we think about copyright of images, protection of stakeholders and their communities; we continue to build on this so that it keeps the gallery current over its 15 year life span). 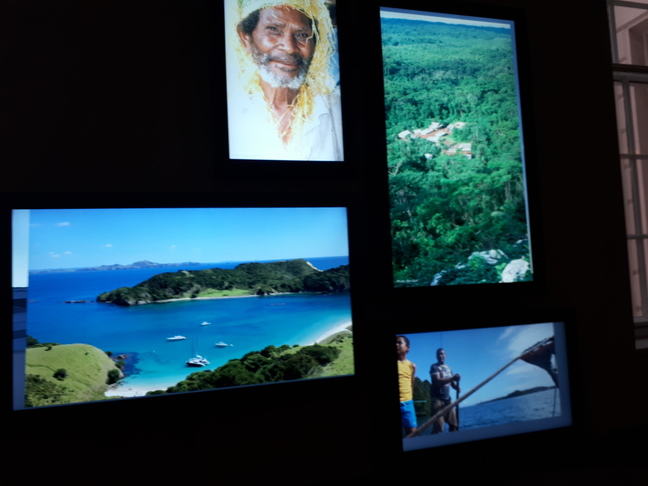 We commissioned Ngati RangiiWaho to create an artwork to fill the historic bookcases. Their work tells the story of encounter at Tūranganui-a-Kiwa, and the past, present and future of their hapu (sub-tribe). This helps us to build better relationships and exchanges across the ocean and shows our visitors a Māori voice, story, and creativity in the gallery. We’ll look at their work later in Week 5.

It is important to acknowledge that there is debate around the ethics of the presence of taonga in European museums and the repatriation of taonga to their communities. 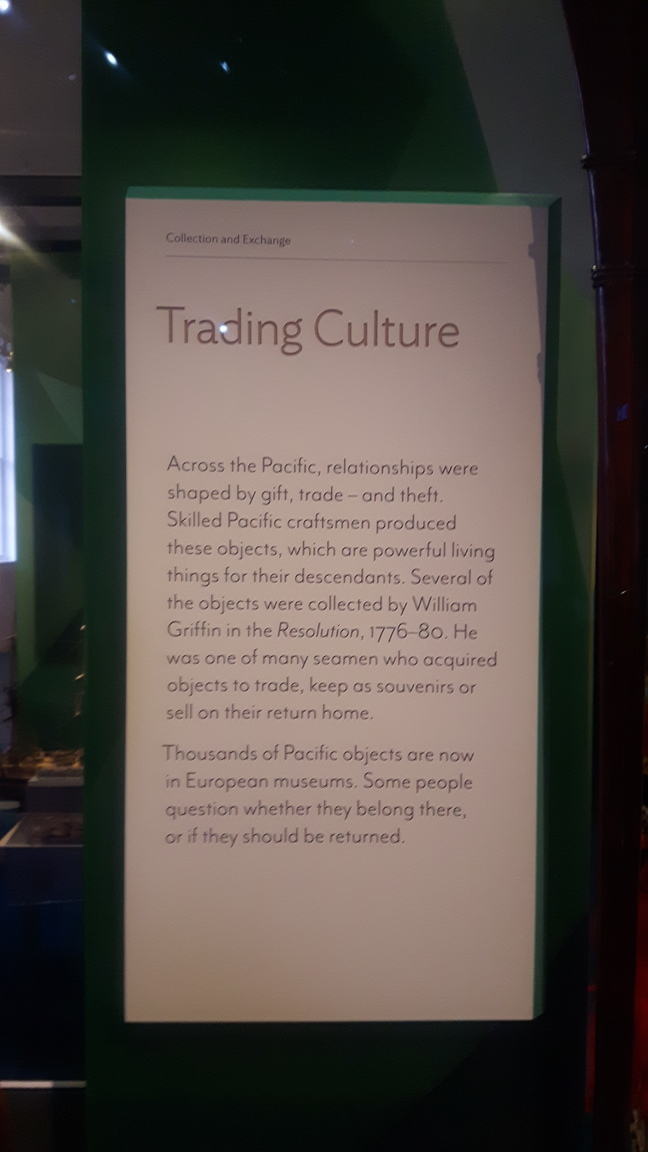 The National Maritime Museum (NMM) is part of that ongoing dialogue within the sector, and conversations with community stakeholders. At present the NMM has not received a repatriation request for any of the Pacific taonga in the collection. Whilst the taonga are part of the museum collection we do our best to consult with their descendants and adapt our practices, to care for the taonga in an appropriate way.

Next week we will talk about institutional changes behind the scenes.