In this text we show how we can incorporate feedbacks in simple mathematical formulation of climate change and we will go through an example showing how the climate sensitivity due to doubling of CO changes as we introduce climate feedbacks.

Where the first term on the right hand side is the direct response and the second is the sum of all the feedbacks.

Noting that the direct response and rearranging to get we get

Thus we need to know the change in the net radiation at the top of the atmosphere due to a change in equilibrium surface temperature () in order to get the temperature sensitivity to a radiative forcing ().

The case of no feedbacks

If temperature is the only climatic parameter that will change the the change in net radiation at the top of the atmosphere due to a change in equilibrium surface temperature is given by Stefan‐Boltzmann’s Law which states that the radiation from a body that absorbs all incoming radiation is depending on the temperature in the power.

In other words, a 1 change in radiative forcing will induce a 0.26 equilibrium temperature change.

If other variables than temperature are changing the calculation of is more complicated.

Where are other climatic parameters such as such as clouds, water vapour, snow, ice etc that again affect temperature.

In the literature the different terms in the denominator are often given as feedback parameters (even if the first term, the direct response, is not a feedback) defined as:

The unit for the feedback parameters are ) and indicate how much the net energy at the top of the atmosphere is changed for a given feedback (in other words how much more or less energy remains in the earth-atmosphere system) for a 1 change in temperature . Using this notation a negative implies that the feedback is negative and positive values that the feedback is positive. Note that in the literature is sometimes defined without the minus sign. Using the above definition we get:

Inserting this into equation 1 gives 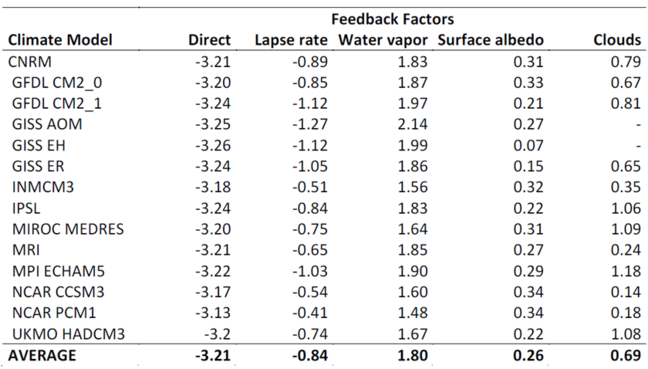 Table: Strength of individual feedback parameters [)] from different state of the art climate models. Values taken from Soden and Held (2006).

Example: Calculating climate sensitivity due to doubling of CO

From the reading material for week 1 the radiative forcing of CO was given as: where is the reference CO concentration (usually takes as 280 ppm) and C the CO concentration. C and C0 must be given in ppm (parts per million).

A doubling of CO then gives a radiative forcing of which together with the average values from the table above we can calculate the temperature change using:

The no feedback result: