0:07Skip to 0 minutes and 7 secondsSleep is a complex behavior and the amount of time we spend in different types of sleep, the structure of sleep, and overall sleep need, can vary depending on many different factors. However, the biggest factor influencing these different aspects of sleep is aging, with sleep changing dramatically across the lifespan, particularly in those early formative years of development. Our sleep has a direct impact on both mental and physical development. It is especially important in young children and is one of the reasons why little ones spend so much time sleeping. Sleep need decreases with age until adult hood, or around 20 years of age, when it stabilizes. How much this decreases and how quickly this happens varies across individuals.

0:52Skip to 0 minutes and 52 secondsHowever, based on scientific research and expert knowledge, the following chart was developed, giving recommendations for sleep needs across the lifespan. As you can see from this chart, average sleep need changes dramatically, particularly in the first five years of life. In newborns, or in the first three months of life, babies sleep for the majority of the day and night on a regular schedule that is governed by waking up for brief and longer periods of time, such as feeding and attention. On average, sleep need at this age is between 14 and 17 hours per day.

1:33Skip to 1 minute and 33 secondsWhen we look at infants, by three or four months of age many babies will have started to settle into a pattern of being awake for longer periods during the day and sleeping for longer periods during the night, although will still generally require one or two feeds during the night. By six months about half of infants will be sleeping through the night, defined as a period of five to six hours. And by the end of infancy, at around 12 months of age, most children will have achieved a more regular sleep wake cycle, sleeping throughout the night with perhaps one or two awakenings, and remaining awake during the day, although still having daytime naps.

2:10Skip to 2 minutes and 10 secondsThese changes in sleep patterns also result in a small decline in overall sleep need from that seen in newborns.

2:19Skip to 2 minutes and 19 secondsAs children further develop, begin walking and talking, their sleep need further decreases as does their need for naps during the day, with most children only having one nap a day by the time they reach 18 months of age.

2:35Skip to 2 minutes and 35 secondsChildren aged between three and five typically sleep between 10 and 13 hours. And by the age of five, this sleep is generally wholly accomplished at night, as children no longer need to nap during the daytime.

Sleep across the lifespan

Our sleep needs change dramatically across the lifespan, particularly in those early formative years of development. 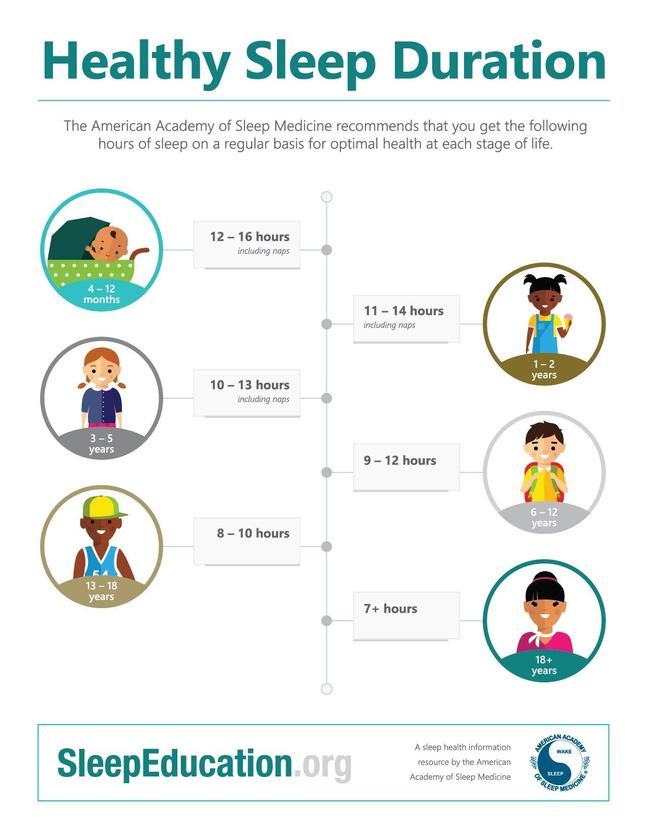 Understand how social media is used in healthcare, to improve communication and information sharing, with this free online course.