So far, much of what we’ve discussed has focused on the developed world. In this article, we’ll share some of the responses to climate change in developing world communities and learn how sustainable communities can be created in all parts of the world.

The impacts of climate change are predicted to be felt most severely in the developing world. This could amplify existing vulnerabilities and threaten the ability of communities to develop sustainably. The IPCC (Intergovernmental Panel on Climate Change) suggest that developing countries will suffer the most from climate change as a result of the economic importance they place on climate sensitive sectors.

The primary challenge in any developing world community is to improve their resilience and adaptive capacity to be able to cope with the impacts of climate change. The Sustainable Development Goals recognize that, to achieve this, any adaptation measures need to be consistent with achieving other goals. A community cannot improve its resilience while in poverty, without access to education or without addressing gender inequalities to ensure nobody gets left behind.

In rural African communities, access to water is going to become an increasing challenge as drought becomes more prevalent. One of the ways in which communities can adapt is to reduce the demand at the very start of the process by using resources more efficiently. But droughts can dry supplies of drinking water and good infrastructure is needed to be able to provide help. This will enable governments and NGOs to properly access rural communities in need. You can help with this by contributing to The Missing Maps project. 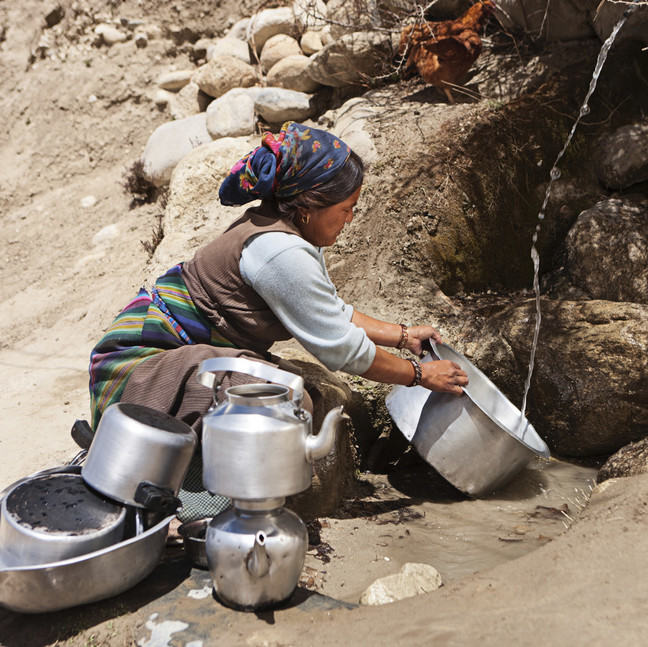 How to develop sustainably

During the negotiations of the 2015 Paris agreement, India was initially resistant to reduce its reliance on coal. From a purely economic perspective, this makes sense – much of the economic growth of India is based on cheap coal and it is pivotal to ensuring the development of the country. However, India is moving towards renewable energy, recently pledging that renewables will account for 40% of energy generation by 2030. This highlights a number of moral dilemmas. How do developing countries progress economically, while at the same time replacing the fuel for their economic growth? Is it right that developed countries which expanded using ‘dirty’ fuels, deny developing countries the same privilege? Do developed countries have a moral obligation to help and support developing countries because of this?

It all comes back to the sustainable development goals. By improving the quality of life for individuals in a developing country by alleviating hunger and poverty, this allows them to take action into their own hands. The IPCC hit the nail on the head in their 2007 publication:

On the one hand, climate change influences key natural and human living conditions and thereby also the basis for social and economic development, while on the other hand, society’s priorities on sustainable development influence both the GHG emissions that are causing climate change and the vulnerability. IPCC, 2007, Working Group III: Mitigation of Climate Change, 2.1.3.

As a result, climate change may become the biggest barrier to sustainable development. But the 2015 Paris agreement included pledges to help developing countries create an adaptation framework whereby the worlds most vulnerable are helped and supported. The agreement also decides that…

financial resources provided to developing countries should enhance the implementation of their policies, strategies, regulations and action plans and their climate change actions with respect to both mitigation and adaptation to contribute to the achievement of the purpose of the Agreement.

A strong correlation exists between areas of the world with large population growth and areas that are susceptible to the effects of climate change. Improving family planning and access to sexual healthcare can help contribute to mitigation against climate change, as well as improve the adaptive capacity of a community. Fewer people reduces the pressure on resources and allows individuals the opportunity to flourish. But this can only happen by bringing down the birth rate of a country, which involves better access to education (Sustainable Development Goal 4) and better access to healthcare (Sustainable Development Goal 3)

If you’re learning with us from a developing country, we’d love to hear from you! Share your story of how you and your community are responding to climate change in the discussion section. For learners from a more developed country, look through the comments and identify the differences between the ways people are responding in the developing world and the developed world.