In this Step we investigate the relationship between pressure and temperature in further detail:

As air rises in the atmosphere, the pressure (P) falls and so the temperature (T) has to fall as well. If a dry ‘parcel’ of air is forced to rise through the atmosphere – maybe as it travels up a hillside - then it cools at the ‘dry adiabatic lapse rate’: 9.8°C/1000m. ‘Dry adiabatic lapse rate’ is a scientific term which sounds complicated but is really quite simple. ‘Lapse rate’ refers to the rate of change of a quantity–in this case the temperature of the air parcel–with height. ‘Dry’ means that the parcel is not saturated with water vapour. ‘Adiabatic’ is a term that scientists use meaning that no heat either enters or leaves the system they are describing - in this case the rising air parcel. So any changes in temperature are due purely to changes in pressure as the parcel rises.

The sloping line (Predicted Lapse rate) in Figure 1 shows the air cooling with height at 9.8°C for every 1000m it rises. But what if the air isn’t dry? What if it has moisture in it? At some height, the air will reach the temperature at which condensation exceeds evaporation (the dew point) and cloud droplets form, releasing latent heat. This released heat will make the air warmer than it would otherwise have been at that height. 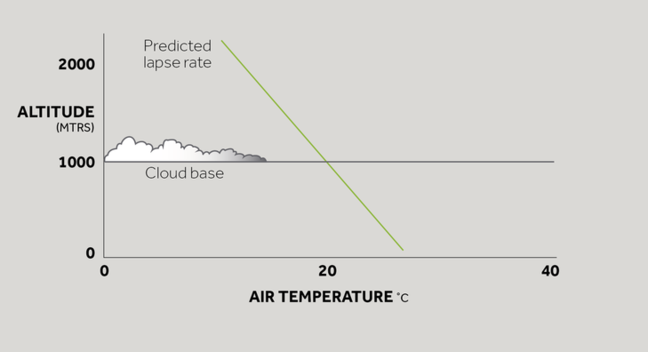 Figure 1: A diagram showing how the temperature of a rising parcel of air would cool with height, if no cloud droplets were condensing (green line).

In Figure 2, the red, wavy line shows the actual temperature of the air, which is warmer than it would otherwise have been above the cloud base (horizontal black line); the level at which cloud starts forming. The air now cools at the ‘saturated adiabatic lapse rate’ also known as the ‘moist adiabatic lapse rate’. This varies with pressure and temperature, and although always lower than the dry adiabatic lapse rate, it can be very similar or as low as 3°C/1000m. 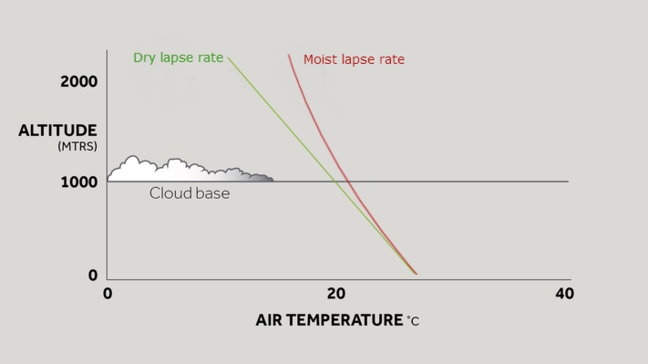 Figure 2: A diagram showing how the temperature of a rising parcel of air would cool with height, if no water vapour were condensing (green line) and, for comparison, how it would cool if cloud droplets did start condensing above a certain height (red line).

Above cloud base, at 1000m in this example, the air (red line) is a few degrees warmer than it would have been if there hadn’t been any water vapour to condense into cloud droplets (green line).

When looking at depressions, we saw how the polar front was unstable, allowing waves to grow on it. There are other ways in which the atmosphere can be stable or unstable. One is related to what happens when air rises.

Consider some air rising up the side of a hill, and cooling - first at the dry adiabatic lapse rate and then, if it goes high enough, the moist adiabatic lapse rate. When the air reaches the top of the hill, if it is colder than the air around it, then, as soon as it has passed the top, it will descend the far side of the hill. This is a stable situation – the air ends up back at the level where it started.

On the other hand, if the air is warmer than the air around it when it reaches the top of the hill, then it will carry on rising – an unstable situation. It will end up a lot higher than the level it started at.

Chimney smoke is a great indicator of this stability or instability in the atmosphere (Figure 3). When the air comes out of the top of the chimney, if it is warmer than the air around it, the plume will carry on rising. If it is colder, then it will sink back down. This can be an issue if there are pollutants in the chimney plume. 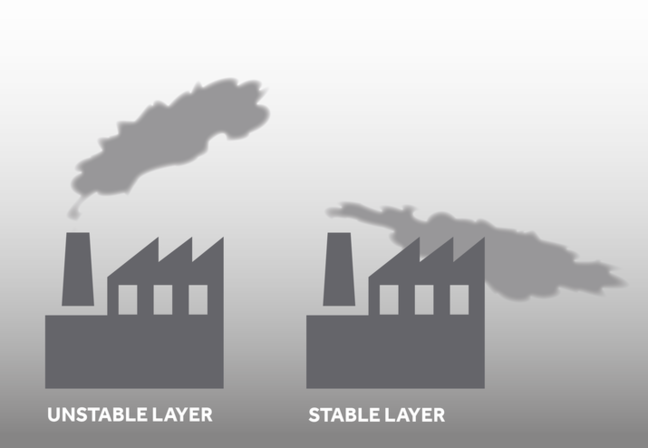 Figure 3: On the left, the smoke from the chimney is unstable and carries on rising. On the right, the smoke is colder than the air around it, so it is stable and sinks.

The atmosphere also consists of stable and unstable layers. In general, the troposphere or bottom 10km or so of the atmosphere, can be unstable or stable. The stratosphere above it contains the ozone layer, which absorbs the Sun’s ultraviolet light and releases this energy as heat. Because of this heat source in the stratosphere, the temperature actually rises with height. You can see this indicated by the red line in the graph in Figure 4. 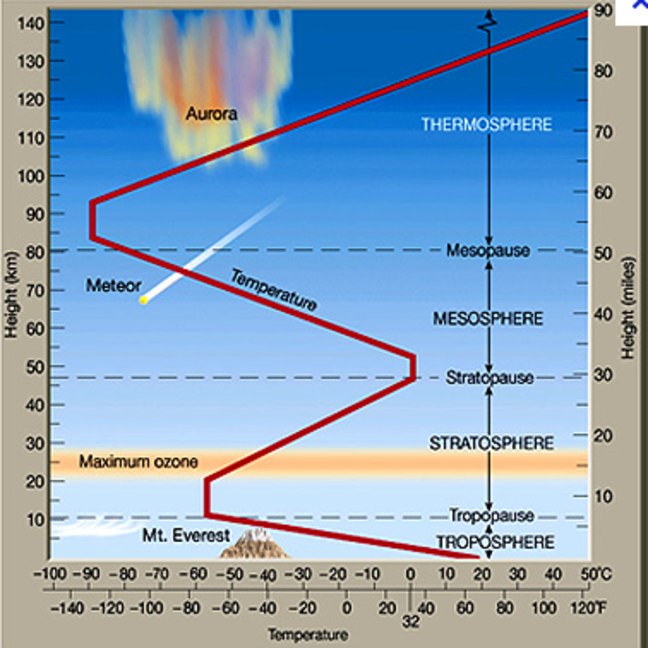 Figure 4: This diagram shows how the temperature of the atmosphere changes with height.

This makes the stratosphere extremely stable, as any air rising from the troposphere below and cooling as it rises, will always be cooler than the surrounding air, and fall back to where it came from. It’s virtually impossible for air to move from the troposphere to the stratosphere; usually this only happens in the Tropics, where air ascending very quickly, in a cumulonimbus cloud, can literally punch its way through.

This is why deep thunderclouds can have a spreading, ‘anvil’ shaped top (Figure 5) . The rising air in the unstable troposphere reaches the top of the troposphere (the tropopause) and, because it can’t cross into the stratosphere above, spreads out sideways. 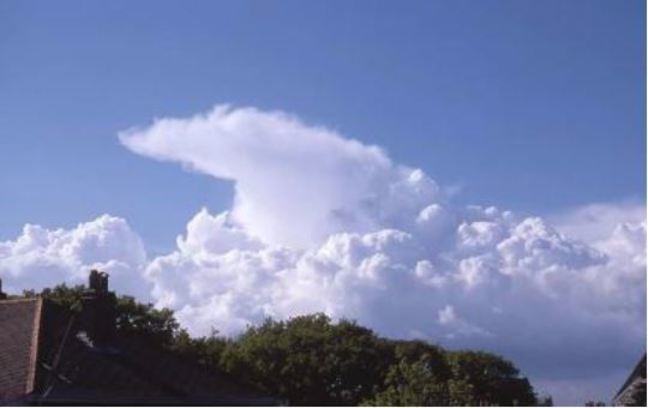 Figure 5: A thundercloud, or cumulonimbus, showing how the convection or rising air in the troposphere cannot continue up in to the stratosphere, so the cloud spreads out sideways. © RMetS

Fog is another example of stability in the atmosphere (Figure 6). On clear, winter nights, when there are anticyclonic or high pressure conditions, the ground loses heat to space. In turn, it cools the air directly above which can end up colder than air higher in the atmosphere. Such a temperature ‘inversion’, with colder air below warmer air rather than the more normal cooling of air with height, is very stable and the air remains trapped near the ground, unless there is some wind to blow it away. Temperatures can fall low enough for cloud droplets to form, giving fog or low cloud. 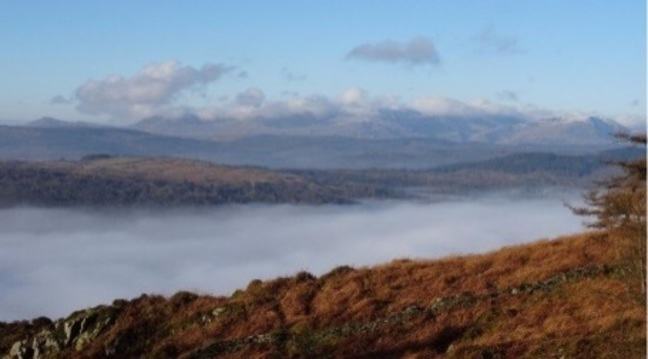 You can read more about lapse rates and stability in the atmosphere on the Metlink website.