Let’s look at the Sun first, and specifically the orbit of the Earth around the Sun. There are three ways in which the Earth’s orbit changes over time, known as the Milankovitch cycles (Figure 1).

These processes have an impact on which part of the Earth’s surface gets most energy through the year. If you have a look at a globe or a map of the world, you’ll see that there is far more land in the Northern Hemisphere than in the South. As the way land and vegetation interact with light and heat are very different to the way in which water does, this has an impact on the global climate. 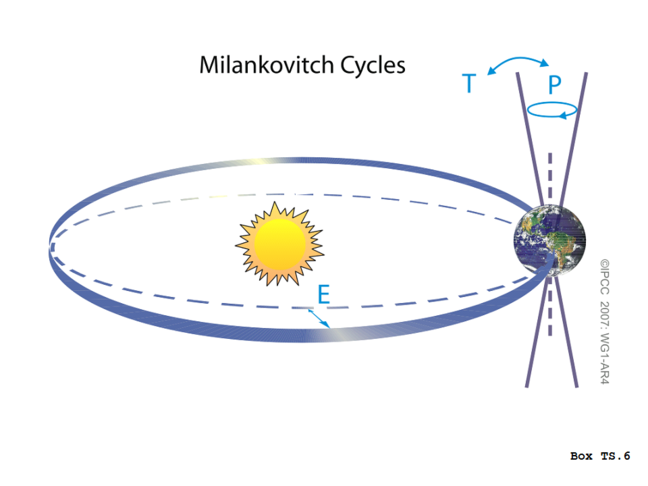 Coupled with feedback mechanisms (for example, if a polar region receives less sunlight, it cools, allowing more ice to grow, this reflects more light leading to further cooling) these three mechanisms can lead to significant changes in the Earth’s climate, including the transition to and from ice ages.

This figure shows that there was a slow cooling of climate over the last 3 million years as polar ice sheets grew partly in response to continental drift. At the Mid-Pleistocene Transition around 1.2 million to 700,000 years ago, the Milankovitch cycles started interacting differently with a shift to a dominant 100,000 year climate signal.

In addition, the Sun itself can change. There is a roughly 11 year cycle in the number of Sunspots on the surface of the Sun (the more Sunspots, the more energy we get from the Sun). Changes in the amount of energy we get from the Sun through an 11-year cycle are typically less than 0.1%, which causes a global temperature response of less than 0.03°C; enough to have some impact on droughts, temperature extremes, the amount of ozone, etc. More generally, after a period of relatively high activity at the end of the 20th Century, the Sun has recently been less active.

Scientific observations of Sunspots began after the invention of the telescope, in 1610, and the approximately 11 year solar cycle, was identified in 1843 (Figure 4). From 1645-1710 there were virtually no Sunspots; a period known as the Maunder minimum which has been linked to the ‘little ice age’ in the Northern Hemisphere. 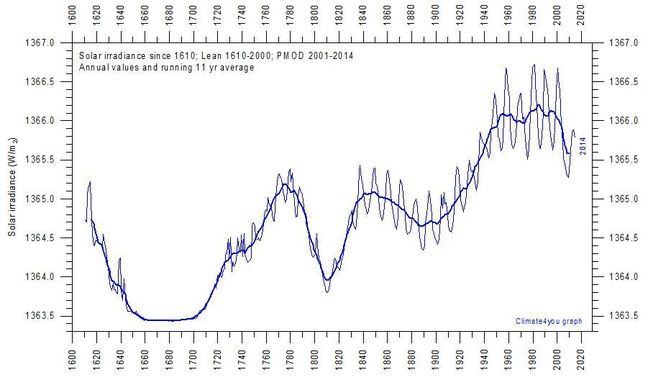 Figure 4: Solar irradiance since 1610 as reconstructed by Lean et al (1995) and Lean (2000), until 2000. From 2001 data from PMOD/WRC are used. The thin line indicates the annual reconstructed solar irradiance, while the thick line shows the running 11 average (mean). The values shown include a background component.© Professor Ole Humlum, Climate4you.com

Figure 4 shows the amount of solar energy arriving at the top of the atmosphere from 1600-2012. Note that the vertical scale only goes from 1363-1367 W/m2– the changes are very small, but you can see the 11 year cycle as well as longer term changes. A cautionary note was added by Harry van Loon of the National Center for Atmospheric Research: “The number of polar bears, the length of women’s skirts, the stock market: Everything imaginable has been correlated with the solar cycle’. This doesn’t mean that these things are in fact affected by the solar cycle, it just means that 10-11 years is a period which many things vary on. No processes actually link the phenomena.

In addition to energy, the Sun also emits particles in solar flares and coronal mass ejections. These travel out into space as the solar wind and, when they interact with the Earth’s magnetic field, give us the Aurora Borealis and Australis (Northern and Southern lights). Particles emitted by the Sun can have a very minor impact on the Earth’s climate, mainly through cloud formation. You can find out more about space weather on the Met office website.

Pooling Healthcare Data Around the World

Discover how data sharing in the healthcare sector has the potential to improve medical outcomes all over the world.