The effect of people 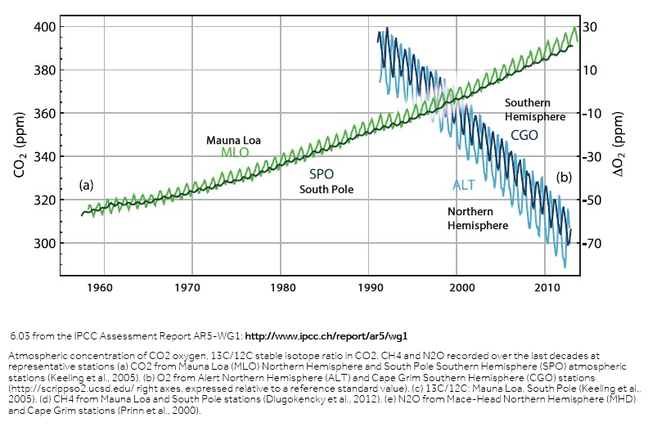 Most of the fossil fuel CO2 emissions take place in the industrialised countries north of the equator. Consistent with this, the measurement stations in the northern Hemisphere record slightly higher CO2 concentrations than stations in the southern Hemisphere. As the difference in fossil fuel combustion between the hemispheres has increased, so has the difference in concentration between measuring stations at the South Pole and Mauna Loa (Hawaii, northern hemisphere).

The atmospheric CO2 concentration increased by around 20 ppm during 2002–2011. This decadal rate of increase is higher than during any previous decade since direct atmospheric concentration measurements began in 1958.

CO2 uptake by photosynthesis occurs only during the growing season, whereas CO2 release by respiration occurs nearly year-round. This means both the Mauna Loa and South Pole concentrations show an annual cycle, with more CO2 in the atmosphere in winter. However, as there is far more land mass and therefore vegetation in the northern Hemisphere, the annual cycle is more pronounced at Mauna Loa.

Atmospheric oxygen is tightly coupled with the global carbon cycle. The burning of fossil fuels removes oxygen from the atmosphere. As a consequence of the burning of fossil fuels, atmospheric O2 levels have been observed to decrease slowly but steadily over the last 20 years (shown by the blue lines in the graph above). Compared to the atmospheric oxygen content of about 21% this decrease is very small and has no impact on health; however, it provides independent evidence that the rise in CO2 must be due to an oxidation process, that is, fossil fuel combustion and/or organic carbon oxidation, and is not caused by volcanic emissions or a warming ocean releasing carbon dioxide (CO2 is less soluble in warm water than cold).

Having recognised that industrial and agricultural emissions of greenhouse gases have been changing the climate, some people have been thinking about ways in which we could manipulate the Earth’s radiation budget to try and reduce the rate at which the climate is changing. Ideas have ranged from putting shiny material into the outer atmosphere to increasing the productivity of tiny shell building animals in the oceans.

One idea, from a group at Edinburgh University, is to have a fleet of wind powered ships, pumping salt water into the atmosphere (Figure 2). If you watched the ‘clouds in a bottle’ demonstration , you’ll know that cloud droplets need something to condense on to. By pumping salt water in to the atmosphere, you could, in theory, make more, smaller cloud droplets which reflect more of the Sun’s light, cooling the Earth. Concerns include whether, by making the planet cloudier in one place, there might be impacts on rainfall in other places. 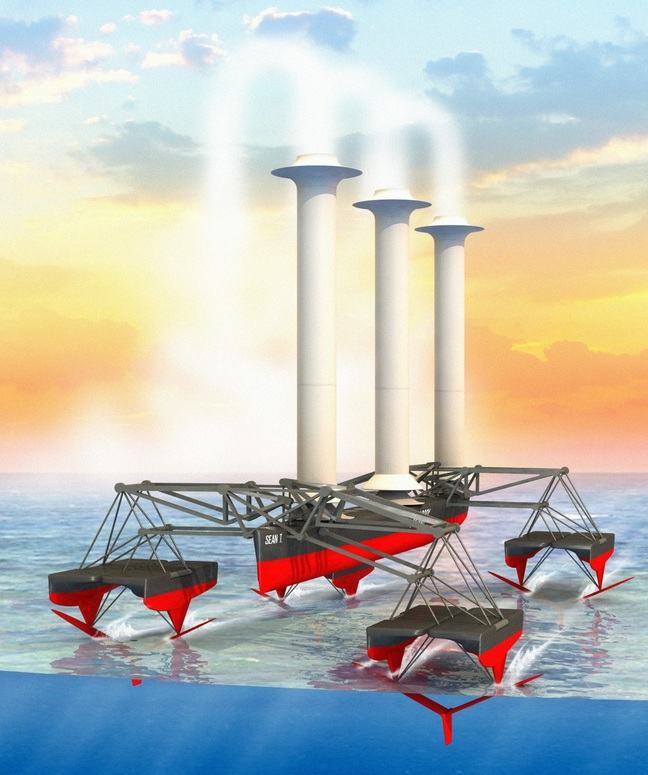 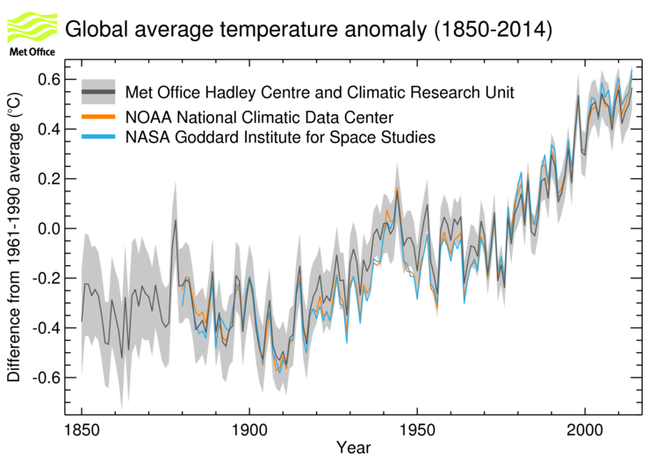 Between 1950-1970, global temperatures didn’t change much. This was because, as well as greenhouse gases, industrial processes emit other pollutants, or ‘aerosols’ – such as sulphates. As well as reflecting sunlight themselves, these act as cloud condensation nuclei, making the planet cloudier and therefore cooler. In Europe at least, legislation to clean the air and reduce acid rain has reduced this factor.

Since 1970, the greenhouse gas related warming, together with associated feedback mechanisms such as the melting of polar ice has dominated, with global temperatures rising rapidly.