This content is taken from the University of Groningen's online course, Decision Making in a Complex and Uncertain World. Join the course to learn more.
View course
4.4

A system is “at equilibrium” (or in a “steady state”) if it does not change anymore. Absence of change can typically be translated into a “balance equation” (like inflow equals outflow; benefits equal costs; immigration equals emigration), and the properties of a system at equilibrium can therefore be characterised relatively easily.

However, it is important to realise that away from equilibrium the system can have very different properties than suggested by theory based on equilibrium considerations. This is illustrated by an example that was already briefly discussed in the lecture (see the figure below). Here, the abundances of six species of competing algae seem to converge to fixed values. The abundances still oscillate a bit around these values, but the fluctuations are so small that for all practical purposes the systems seems to be at equilibrium. Although this system is “almost” at equilibrium, its properties are fundamentally different from a system that would really be at equilibrium: all six species do survive, while according to the “principle of competitive exclusion” not more than three species can possibly coexist at equilibrium. The same holds for dynamical systems in other scientific disciplines: insights obtained on the basis of equilibrium arguments cannot be extrapolated to systems that are away from equilibrium, even if the deviation from equilibrium is very small. 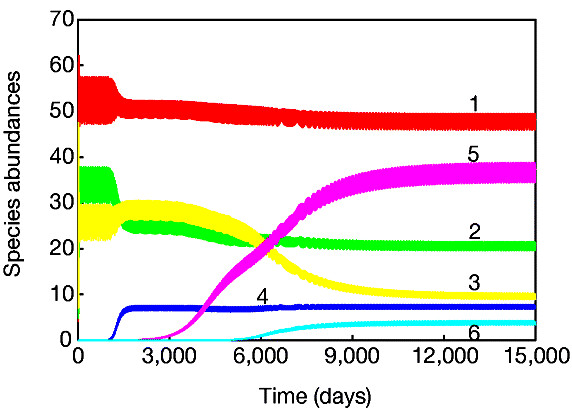 Yet, in many disciplines a large part of the seemingly well-established textbook knowledge is based on equilibrium arguments (often without stating this explicitly). There is nothing wrong with this if we can assume that the system under investigation has the tendency to attain equilibrium. But how realistic is this assumption?

Biological competition theory is a good example of the fact that the behaviour of simple model systems may not be representative for the real-world processes under scrutiny. Until recently, biologists were convinced that competition among species is a prototype example for an interaction that will result in equilibrium. This belief was based on many lab and field experiments and on many theoretical studies that all concluded that abundances of competing species will converge to equilibrium. However, virtually all these studies considered the highly simplified situation of only two species competing for only two limiting factors. If competitive systems are as simple as that, they do indeed converge to equilibrium (because there are too few degrees of freedom for allowing ongoing fluctuations). As discussed in the lecture, this changes fundamentally as soon as the system is made a little more complex by considering more than two species and/or more than two limiting factors.

In the first case, A is a “standard” kind of behaviour that can be exploited by a different type B, while C employs the standard behaviour but also invests into a costly protection against exploitation by B. In such systems, the standard type A is outcompeted by the exploiter B, the exploiter B is outcompeted by the protected type C, and C is outcompeted by A (since in the absence of exploiters the protection device only induces costs without having benefits). In bacteria, for example, a normal strain A is outcompeted by a strain B that produces an antibiotic directed against other strains; strain C does not produce antibiotics, but an antidote against B’s antibiotic. Similarly, lizard males defending large territories (A) are outsmarted by “cheaters” B that live on these territories in disguise, mating with the females present; but these cheaters do not have a chance against a third type of male (C) that defends smaller territories but guards its females against intruders.

In the second case, just by being successful each strategy paves the way for one of its competitors. This is the mechanism inducing oscillations in systems of competing algae. Assume that three algal species A, B and C compete for three limiting nutrients a, b and c (like nitrogen, phosphate and silicate). A is the best competitor for nutrient a, B for b and C for c. Assume that A is the predominant species at a certain point in time, and that A, while being a good competitor of nutrient a, needs a lot of nutrient b. While growing, A will therefore drive the level of nutrient b to low levels, until the availability of this nutrient limits the growth of species A. This paves the way for species B, which is the superior competitor for b. But if B needs a lot of nutrient c, it will, while growing, drive the level of c to low levels, thus paving the way for species C. The circle is complete, if species C needs a lot of nutrient a, thus paving the way for A. This scenario may sound highly specific, but if many species are competing for many nutrients, such cycles are actually quite likely.