This content is taken from the University of Groningen's online course, Decision Making in a Complex and Uncertain World. Join the course to learn more.
View course
5.4 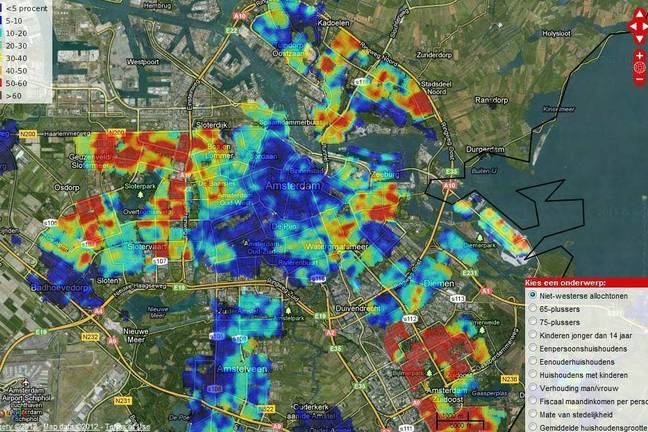 The word segregation means separation of groups with different characteristics. We see segregation occur in many forms in society. A particularly important example is racial or ethnic segregation between the different neighbourhoods in a modern city. Ethnic segregation is a pattern that occurs in most modern cities with a diverse population. You have already seen this map for the city of Amsterdam that is on the cover of this article.

Here you see another example: the city of Chicago depicted in a map in which every individual inhabitant has a colour showing his or her race. 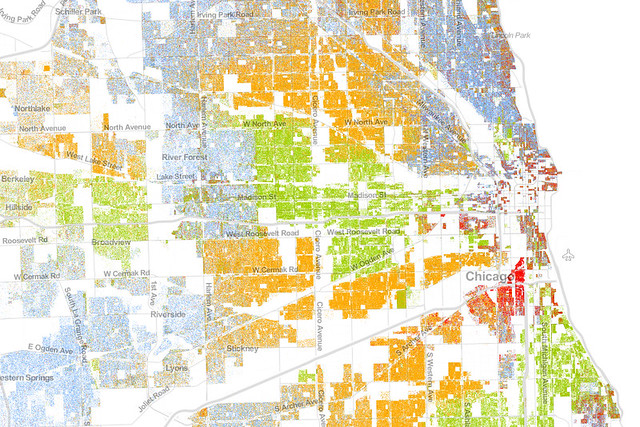 These maps clearly illustrate how ethnic or racial groups are not just randomly mixed in a city. Instead, every neighbourhood has one predominant colour. There are many possible explanations for this pattern of segregation. Research has for example pointed to discrimination by landlords, or to the role of housing prices. But in the lecture about emergence you have also learned about another possibility: segregation may be an unintended result of social self-organization. Segregation may even arise when people do not mind to live in integrated neighbourhoods.

This result has been prominently demonstrated by the famous model of Thomas Schelling that you have already encountered in this course. Let us briefly recall the main ingredients of that model. First of all, there are different groups, say races, in the cellular world and initially they are randomly mixed. See this example: here we have only two different groups and they are both the same size. Here we use the standard Segregation model that you can find in the Netlogo library under social sciences. 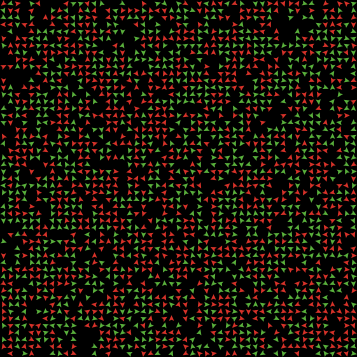 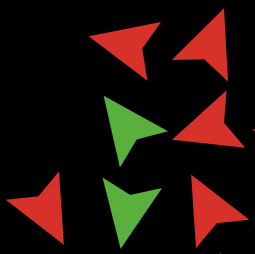 In this particular 3x3 neighbourhood, the green agent in the centre has one green and five red neighbours. He would be dissatisfied. The Netlogo program also tells you how many agents are actually dissatisfied at any point in time. For a random starting configuration like the one shown above and a satisfaction threshold of 30% own colour, we find that typically only a minority of about 18% of the agents is dissatisfied in the initial state (see below). 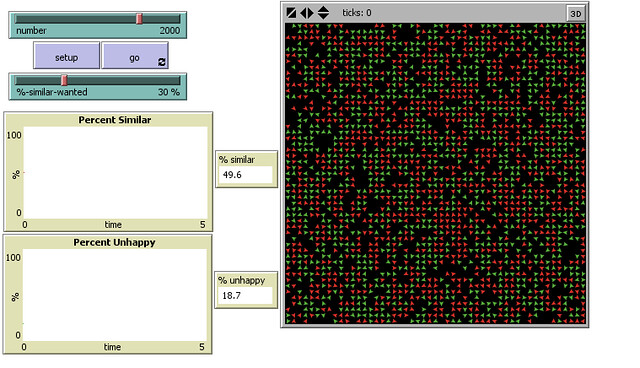 What will happen if we run the model from this situation? Try to do this yourself with the NetLogo program.

When you run the model, you can see that, gradually more and more segregation between the two groups emerges. This is clearly an unintended result, because the few dissatisfied agents could have been relocated and be made happy without creating this much segregation. So why does this happen?

The reason is that we have here again a self-reinforcing process. We have already seen that there are some agents who are initially dissatisfied. This happens just by random chance. But when these agents move, they change the situation for the others that stay behind.

As a result, everywhere in our artificial world neighbourhoods become either more and more green or more and more red. This process continues until a high level of segregation has emerged. Notice that this is a stable outcome, because now every agent is satisfied with his neighbourhood. That is: almost every agent now lives in a neighbourhood with many more than 30% of the neighbours being of the own group.

Here you see a typical outcome of the simulation of the Schelling model from an initially random configuration like the one shown above, using the same parameters. 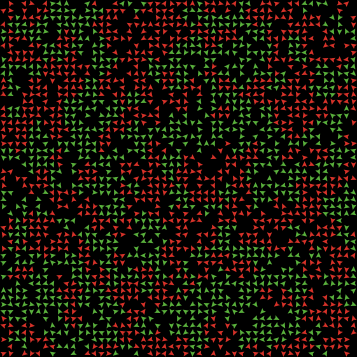 In this example, none of the agents is dissatisfied in the final outcome, and agents have on average 71% neighbours of their own colour. Initially, this figure was only about 50%.

But this satisfaction comes at a cost. And this cost goes unnoticed from the agent’s point of view: there is now much less contact and interaction between the different groups. Arguably, such segregation may increase the danger of intergroup conflict in a society. That at least is what much research on intergroup contact suggests. If there is intergroup contact this can reduce prejudice. But without intergroup contact, negative stereotypes about out-groups may survive or even become stronger.

So we have seen another case of social-self organization through a self-reinforcing process. Again, the exact outcome of such a process is hard to predict. Which neighbourhoods will become red and which green? This is something that is hard to tell from the initial situation. But the general feature of emergent and increasing segregation over time could be inferred from such a simple model. We also can get insight into the conditions that make segregation likely.

In the next article, we will look a bit more into what the model tells us about the conditions when segregation would arise. And we will relate Schelling’s model to real data about ethnic preferences.